For the second time in two weeks, rival gangs broke out in violent action as crowds of onlookers egged them on. This latest fight happened in Berea, Ohio between rival Ohio and Indiana gangs. 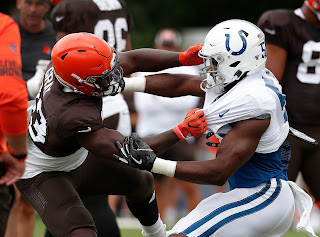 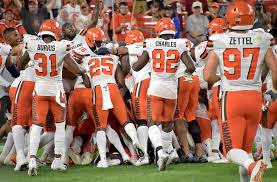 OK, so technically this wasn't a street fight, but an NFL-sanctioned preseason scrimmage. But these days, it's getting harder and harder to tell the difference.

This year is the 98th Anniversary of the NFL and the sport has sunk to this level. There were at least five fights in this game and one Cleveland player went to the hospital with a broken ankle.

The National Football League came into being in 1921, and there are only three active teams still around from its inaugural year. There has always been a long-running battle within the NFL (and pro and college sports in general) between the Sharpers who are in it for the money and the Sportsmen who are in it as a labor of love. Since the NFL-AFL merger in the 1970s and the Players' Strikes of the 1980s, the latter has been losing ground to the point where any coach or owner who talked about 'fair play' would likely be laughed out of the league today. Witness what Cleveland coach Freddie Kitchens had to say about his team's on-field thuggery:

“I told you guys yesterday, we are not into backing down from anything. We identified a problem yesterday, not that there was anything wrong with the tempo, but we set the tempo...I just know that we are not going to take nothing from anybody. At some point, you have to stand up for yourself. If it is a penalty then it is a penalty, but sometimes… I don’t know.”
It's not really any great mystery, Freddie. You tell your players not to get suckered into fights and dirty play, but to concentrate on executing plays and winning fair-and-square. That's what real coaches like Tom Landry used to tell his players. Landry, by the way, had five NFC Championships and two Super Bowl wins to his credit. How about you, Freddie?

Kitchens' gangland/Trash Culture attitude is hardly unique in sports; or for that matter, in society in general. Nice Guys Finish Last and Winning isn't Everything, it's the Only Thing, are the mottoes dominating society---of which our sports are a reflection. Cleveland sportswriter Randy Gurzi inadvertently summed it up while writing about the fight/football game:

"A little dust-up here and there is one thing, but this screams lack of discipline. I may be old-fashioned, but I never liked the joint practices and this is a reason why."

What Gurzi essentially is doing is almost blushingly apologizing for his passe belief that discipline and sportsmanship should actually be part of a contest.

And it's not just sports, but Hollywood, too, promotes the same lack of ideals. How many action films of the last four decades depict the 'heroes' as winning by over-excessive force; or by cheating; or otherwise using dirtier tricks than the villains? In the earlier eras, we certainly didn't see that. 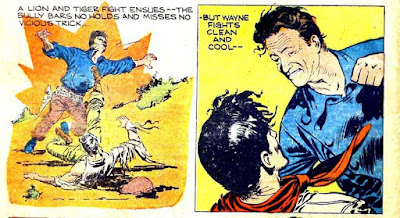 All of this glorification of gratuitous violence comes from a deeper social problem. Cynicism---the belief that good guys never really win and that Might makes Right is at the bottom of this phenomenon. And this widespread sensation among the general populace is directly traceable to a breakdown in religious faith. St. Paul taught us that, without Faith, life becomes a matter of "eat, drink, and be merry for tomorrow we die," becomes socially normative. The 'Win at all Costs' mentality is only one step removed from that. In contrast, Faith teaches that Good will triumph in the end; and that God works for Good even in the midst of the most atrocious evils which Man can devise. One Catholic Cardinal (I don't recall which one) once said that Cynicism is born of Despair, which he described as a sin akin to Atheism. When asked why he thought so, His Eminence replied that "Atheism denies God's existence; but Despair denies God's goodness." This is a very good point.

In broader social terms, a society that loses its faith in God as Supreme Good becomes a predatory society. And we wonder why there is mass-violence all across the land? Almost all of these mass-killers in recent history were nobodies who wanted to be somebodies by wiping out defenseless people. All that these murderers really did was what they've been taught by institutions like the NFL, Hollywood, Academia, and the Deep-State Government. The killers just took the philosophy to its logical conclusion.

It's hypocritical therefore to claim that gratuitous violence can be stopped by gun control, or banning video games, or anti-bullying campaigns, etc. The answers to the problems have to come from within, first and foremost.