Events have been moving fairly quickly these days. People who were shaming us for not socially distancing just ten days ago, are busy giving free hugs in the street with sympathetic officials---and occasionally, the Police. The MSM's new herd-driving campaign narrative seems to be that we're all coming together to sing and hold hands. That of course, ignores the dozen or so people shot down in the streets during the peaceful protests. President Trump went out to inspect damage done by the Emissaries of Peace and Love to St. John's Church. The outrage from the Elites over this visit was greater than the outrage expended over the church-burning.

But, as we saw during the COVID lockdowns, in the New America, even Death is a matter of opinion. The family of the late lamented George Floyd was able to shop around and get the autopsy result they wanted so that all of this mayhem could be justified. Now, as we've previously noted, kneeling on a person's neck is not a lethal move---as any Martial Artist can tell you. Nor is possible to speak---as Floyd did---if he was being asphyxiated. And the Receiving Hospital released a report stating that Mr. Floyd was pronounced dead thirty minutes after arrival. Oops! Oh well, that will all be swept under the rug at trial.

Eric Garcetti of Los Angeles---who is bar none one of America's stupidest mayors---has never even lifted the COVID lockdown in LA; but was out maskless and cavorting with the crowds this week in a show of solidarity. Garcetti was saying less than two weeks ago that it wasn't safe to reopen Los Angeles until a vaccine for COVID-19 was developed. But apparently vandals and looters did a sufficient job of accelerating the destruction of Los Angeles' Middle Class that Garcetti felt emboldened to venture outside and harangue the crowds. 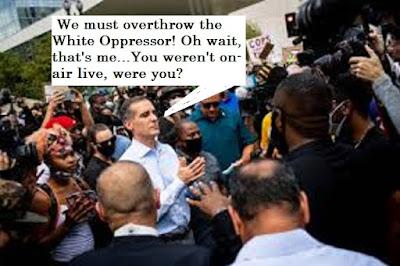 Honorable Mention should made here for Santa Monica's Mayor, Kevin McKeown. A portion of the mob left LA for green pastures down in the Palisades, and much to everyone's surprise, Mayor McKeown reacted relatively swiftly and decisively for a mid-size town mayor. The scum managed to set nine fires and hit some high-end department stores before the overwhelmed SMPD was augmented with the National Guard. 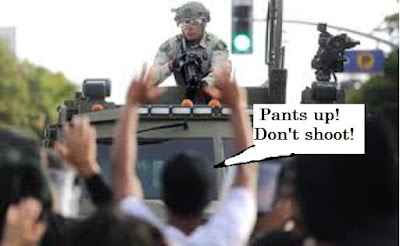 400 of the scum were captured and arrested and the fires suppressed by nightfall. Sadly, the vermin who escaped migrated down the Coast and sacked Ventura; but it's interesting that one mayor who followed Trump's advice got good results. But the was by far the minority of cases. The mayors and governors involved here aren't interested in success. These riots were orchestrated like the Pandemic lockdowns were. It didn't have to be COVID-19; any other exotic viral outbreak would have sufficed to shut down the Middle Class. Likewise, it didn't have to be George Floyd; any other gentle giant who died in custody would have been reason enough for the rioting. 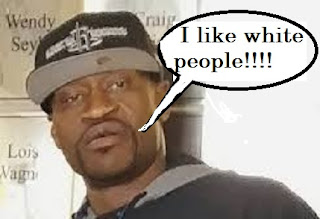 The late Mr. Floyd we have learned was a 6'6" former college basketball player who had a criminal history dating back from around 25 years ago. He served five years, from 2009-2013 for breaking into a home and robbing a woman at knife-point. He was also a drug addict---Methamphetamine and Fentanyl were found in his system. Now as far as 'excessive force' goes; it's not unheard of that meth-heads that big and that violent have been arrested; broke the handcuffs, and attacked police officers. Floyd's past behavior got himself into situations where the police take extra precautions. And, as a side note, a combination of meth and opioids can induce heart failure quite easily in a stressful situation---especially in large, athletic people.
But, we're not going to hear much about any of that. The Elites are already interjecting fake news about White Supremacists instigating the looting at and violence at peaceful protests; just like they were fanning fake news about 'Angry White Men' being behind the anti-Lockdown demonstrations. Where this race-baiting is leading is not going to be any good end, despite what certain idiots in Houston think. 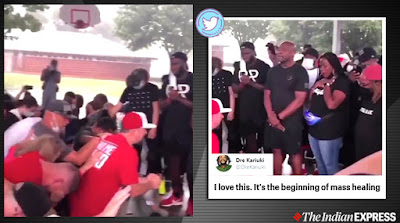 “Father God we asked for forgiveness from our black brothers and sisters for years and years of racism,” wailed some stupid cuck from among the kneeling dorks. Collective Racial Guilt is being promulgated here; and the reason is not because the Elites---most of whom are White themselves---care anything about minorities. It's just that Whites happen to be predominantly Conservative; hence an obstacle to their plans just like the Middle Class. The Elites can build their Utopia on the backs of one group as easily as any other.
If anyone thinks this is mere hyperbole, listen to these chants at a looter beaten while collecting bricks starting at 4:24 on this footage. Hear the "White People" from the mostly dusky crowd? In this case, I'm not sorry they beat the scum and turned him over to police, but this doesn't look like a good future omen to be quite honest.
We Conservatives are up against a real problem. Fighting Liberal propaganda is one thing: fighting Mass Hysteria is another. The last thing these maddened crowds want to hear right now is Reason. We'll have to find a way, because the Rebellion is far from over.
Posted by The Night Wind at 3:26 PM