THE ELITES STRIKE AT THE TWO-PARTY SYSTEM

The Junta today took several major steps towards their goal of consolidating power. Anyone who's ever studied historical examples of the hostile takeover of a government no doubt recognizes the pattern. I warned now nearly a year ago that the temporary 'emergency decrees' issued at the beginning of the Scam-demic were the precursors of an intended coup d'etat. Our (real) President didn't see the signs, unfortunately.

Four major events happened this Monday alone. The Cumulus Media Corporation handed down a diktat to its Conservative radio hosts that it would no longer tolerate free speech what it termed 'hate speech.' Brian Philips, one of the limp-wristed corporate bureaucrats at Cumulus said it so:

“We need to help induce national calm NOW. The company will not tolerate any suggestion that the election has not ended. The election has been resolved, and there are no alternate acceptable ‘paths. If you transgress this policy, you can expect to separate from the company immediately.” Cumulus hosts such pundits as Mark Levin, Ben Shapiro, and Dan Bongino; it must have been a great ego-boost for that puny corporate punk to talk to his betters this way.

Cumulus Media is another billion-dollar radio oligarchy made possible by the Clinton Co-Presidency and RINOs like Trent Lott who repealed several laws that made the hostile takeover of mass-media possible. In fact, Lott is now one of the lobbyists retained by the National Association of Broadcasters of which Cumulus is one of the major players. In fact, Mary Berner---Cumulus' CEO and Hilary Clinton supporter---is on the NAB's Board of Directors. According to Open Secrets, the NAB is the 20th largest lobbying PAC in the Beltway.

Comcast issued the following statement: “The peaceful transition of power is a foundation of America’s democracy. This year, that transition will take place among some of the most challenging conditions in modern history and against the backdrop of the appalling violence we witnessed at the U.S. Capitol last week. At this crucial time, our focus needs to be on working together for the good of the entire nation. Consistent with this view, we will suspend all of our political contributions to those elected officials who voted against certification of the electoral college votes, which will give us the opportunity to review our political giving policies and practices.”

Notice how these weasels seamlessly connected challenging the Election results with the "appalling violence" of January 6th. You can see what's going on here: this is the excuse---not the reason---for singling out certain opponents of the Junta.

AT&T---one of the largest and most aggressive corporations that pander to the Gay Mafia--- was at least more bold and had this to say: “Employees on our Federal PAC board convened a call today and decided to suspend contributions to members of Congress who voted to object to the certification of Electoral College votes last week.”

Comcast is owned by billionaire Brian Roberts, a known associate of both the Clintons and the Obamas. I suspect that he is probably also an active participant in the financial cabal pulling the strings on the incoming administration. AT&T's CEO and Chairman Randall Stephenson recently retired. Stephenson was one of the ring who opened the Boy Scouts to homosexual predators. He was replaced as CEO by John Stankey, the former CEO of Time-Warner; and as Chairman by William Kennard, Clinton's former FCC Chairman and Obama's former Ambassador to the EU. Stephenson, incidentally, is a member of the WEF and Kennard heads the shady Carlyle Group, another collection of Wall Street looters who control an estimated $200 billion in assets.

In a third major move, the banking cartels have announced that they are 'temporarily' blocking donations to PACs---Republican PACs only, of course. Breitbart News reported:

"J.P. Morgan Chase, the nation’s biggest bank by assets and market capitalization, said it is halting donations through its PAC for six months. Citigroup, the third-largest U.S. bank by assets, is reportedly pressing pause on political donations for the first quarter of 2020. Goldman Sachs put the kibosh on donations pending a review of 'how people acted during this period,'according to the New York Times, with the likely result that it will exclude Republican politicians who challenged the 2020 election results. Morgan Stanley also said it is stopping political contributions. It is considering withdrawing support for any politicians who voted against certifying Joe Biden’s electoral college win. Bank of America and Wells Fargo are still considering their response but are likely to follow the path chosen by their competitors." 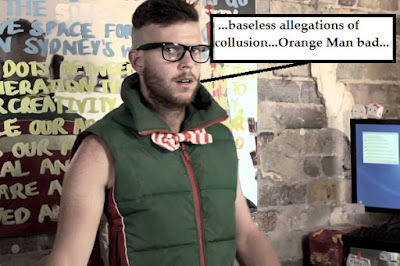 Right---it can't be more than a conspiracy theory to the average Ameroboob. It's never happened before in all of human history that powerful financial interests headed by ideological fanatics have banded together to take over governments, has it? Certainly it's only a coincidence that major US Corporations work in concert against one political party---and only for the public good, of course. It's about as believable as the 350,000 COVID-19 deaths or that 80 million people really voted for a boob who almost never campaigned in person.

Finally, Nancy Pelosi---whom just as coincidentally---both owns stock in and is funded by these same Big Corporations, has drawn up another Impeachment attempt at President Trump. The old bat House Speaker reportedly has 214 votes to proceed; and is gathering RINOs to get a majority. 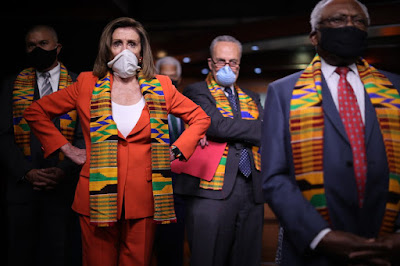 So where is all of this leading? This is more than about taking political revenge or DNC cheating. The end game of all of this is to wipe out political opposition and establish a one-party State. They don't intend to weaken the Republican Party: they intend to destroy it. These moves are all steps---deliberately implemented---to consolidate the power of the incoming Regime; which, in turn will do the bidding of their masters on Wall Street and the WEF. The RINOs are literally in a join or die position right now. They can support the purge and help the DNC pretend that the overthrow of the Trump Administration is all legal and legitimate; but in the end, they'll find themselves expendable. The Elites are wily enough to know that these treasonous bastards could someday betray them too; and besides, there are still grudges to settle once the dust clears.

Essentially, the Republican Party is a political ghost; at least on the National level. But there are still things that local Republicans can do. State and local governments have a lot in the way of political power and one thing that the Elites lack (so far) are effective means of enforcement. "Disengage, Disconnect, Disunite" needs to become our motto. Local politicians can begin by cutting all forms of dependency upon the national government, for example; and subsequently laying the corresponding tax burdens for their shortfalls upon any Big Corporate entity within their jurisdictions. In fact, raising taxes on these Corporate looters at local levels doesn't sound like a bad idea in any event. 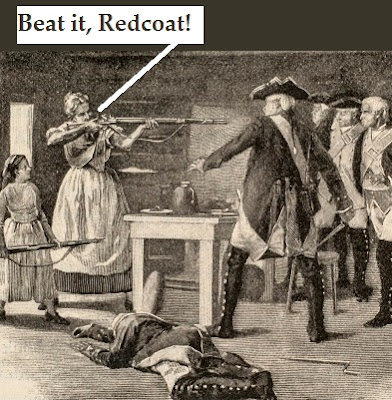