THEY WHO MUST BE OBEYED

Throughout the recent months, the United States has seen a well-coordinated attempt by certain interests aimed at the complete overthrow of Constitutional Government. True, these interests have been chipping away at our Sovereign Rights for the last few decades---since the late 1980s, at the very least. The gravity of the situation has more or less obligated our site here to focus nearly exclusively on fighting the Coup d'Etat.

While engaged in this battle, I've tried not to delve too much into questions like 'How we got here' or 'How did they gain this degree of power?' We really have to focus on stopping these dirtbags and work on undoing the damage later on. The President has won some opportunities for a fair hearing in the Courts; and a few State Legislators are finally stepping up and challenging the Electoral College in their States. As much as I regret to say this, if we fail to stop the Democratic National Committee from seizing control of the Presidency, our chances of survival as a Constitutional Republic are very small. If this happens, the last guardian of Western Civilization is going to be Russia: a country that only recognized the Rights of Man about 200 years after our Constitution was ratified. But we can't get distracted with futuristic scenarios any more than with historical ones at this point in time.

Blogger Citizen Tom, however, asked a good question on his recent post, Did They Even Care if They Got Caught? which is a relevant topic that I've wanted to write about for some time. Here it is, in context:

NW: "Of course they don’t care: there’s never been any consequences for anything they’ve ever done. Sure, occasionally a celebrity or a CEO or two and maybe a political operative or two will get sacrificed for public opinion; but as soon as the story disappears from the news cycle, the ‘Get Out of Jail Free’ card gets played and it’s business as usual."

CT: "That observation raises a question. How do we define the people we are calling 'they'?"

"They" are hard to define, and "they" make it so intentionally; because an elusive definition gives the appearance of a baseless conspiracy theory. The postmodern Academia, Inc. and the Corporate Media have more or less conditioned the general public to laugh off 'conspiracy theories' despite the fact that men have conspired to take over governments (including ours) throughout time. Here we've defined "them" as the internal enemies of individual rights and refer to them in terms used commonly as The Deep State; the Elites; and more recently as the Insurgency. This modern incarnation of old anti-American movements had its origins in Maoism of the Vietnam War Era. Following the Left's humiliating defeat in 1980 and 1984 Elections, it became clear that their Long March strategy had failed; and they began to devise non-Democratic ways of taking and holding power more permanently. To that end, they formed coalitions with other anti-Reaganite, anti-populist, and anti-American forces. Namely, this included the moneyed Aristocracy who resented equality (i.e.,the RINO Republicans); disenfranchised political fanatics and arrogant academic supremacists; international financial cartels; foreign aristocracies greedy to regain their power; as well as organized crime. It took on its formal hue with George Bush Sr, proclaiming "a kinder, gentler America" under the auspices of a "New World Order." Soon, "the torch was passed" to the Clintonistas; the Bushmen returned again later on; we were bamboozled after that with "the audacity of hope" and we were supposed to turn the affairs of State over to Hillary Clinton or Jeb Bush for another round in 2016.

These are the elements of the modern Deep State which operated from the mid- 1980s to 2017. During this period, "they" controlled the top of American society through unwritten rules and internal understandings between themselves for common purposes.

The 2016 Election set "them" back again; but it ought to be obvious from the events of 2020 that "they" are no longer a loose confederation but an actual organizational effort at work. We've done several articles on some of the major players in the Coup---but still I'm admittedly not quite certain where the actual top level of this group is. Now, of course, anyone who subscribes to any major religion understands who is ultimately at the bottom of it all. 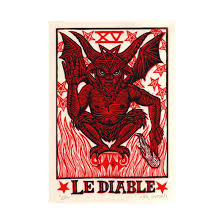 However, leaving aside his sooty highness for now, the hierarchy appears to follow this general pattern:

1. The Dupes: those without the intelligence to question the Elites or the courage to resist. They can be counted on to do as they're told; and make up the population of drones needed for labor and general conformity in the proposed New Order. The Little People; the Uncle Toms, the NPCs, etc. make up this class.

2. The Enforcers: also not a group noted for their intelligence: they are however noted for their rapacity and perpetual state of anger. They answer to so-called 'activist leaders' and their 'job' (though they universally hate the term) is to enforce Political Correctness and social change. Antifa, Black Lives Matter, Anarchists, Communists, street bums, and career criminals make up this element. Under the New Order, they probably will become the new police and security forces---much as Hitler intended for his SA and SS units historically.

3. The Propagandists: barely one level above the first two groups, this group is the public face of the Rebellion. They promote the Elites' agenda through their near-monopolistic control of Mass Media and Public Education. Through popular culture and entertainment, fake news, junk science, and academic sophistry, they attempt to give a veneer of respectability and credibility to the Elites' abominable programs; as well as framing these usurpations as New Normals that everyone who's 'in' is following.

4. The Robber Barons: this is level where we start to see some actual power. These are politicians and smaller financial oligarchs who've carved out some political or economic territory for themselves during the coup. Insurgent governors and mayors who've assumed absolute power over their respective states and cities, the Biden Campaign, and CEOs of corporations which have taken control of essential services and amassed large market shares this year make up this group. They are not at the top of the pyramid, but they control armies of bureaucrats and vital functions. This group also includes foreign-run mobs like MS-13 and others.

5. High Finance: at this level are men who control literally trillions of US Dollars in wealth. Some of these characters are well-known figures like Bill Gates, George Soros, Rupert Murdoch, Eric Schmidt and Jeff Bezos---others operate behind shadowy financial cartels like Blackrock, Vanguard, and State Street. These three criminal enterprises financial groups alone control $17 trillion in assets. These gangs also operate NGOs and charitable foundations as fronts for planning and experimenting with their objectives. 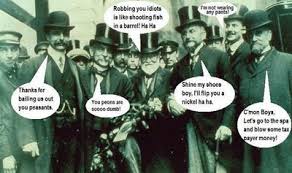 The 5th rung of the ladder has been as far as my research has been able to go; although I'm strongly suspicious there is at least a 6th. There is foreign influence involved in this as well, though to what extent, I'm not certain. The Arabian and British Royals definitely have their fingers in the pie. The Great Reset was the admitted theme of the most recent World Economic Forum. This is further proof of orchestration at very high levels. The WEF outlined a plan based on the writings of its founder, Dr. Klaus Schwab. Schwab is pretty clearly the ideologue behind the coup: but probably not its actual leader

So, to answer our friend Citizen Tom's question: I guess that the best answer right now is that "they" define themselves. "They" are organized, powerful, well-financed, ruthless, and fanatical. And the bottom line is that we have to stop "them" before it's too late.

Some Links: Due to the current crisis, information has been flowing at a faster rate than one blog can possibly follow in detail. I've decided for the foreseeable future to add links to stories which readers might find valuable as a regular feature.

Michael Fumento: The Media's COVID War in the Dakotas