Despite near-zero coverage from the Media Establishment, ongoing hearings are being held in Pennsylvania---site of some of the deepest allegations of voter fraud. The Insurgent Governor of the State---whose dictatorial rule was overturned by a Federal Court---is impotent from stopping the Republican majority in the State Legislature from pursuing the course of justice.

So today, a story began popping up in the Comments sections of various sites involving testimony given during a hearing in Delaware County, Pennsylvania---the West Chester area. After considerable searching, I found the story referenced in a passing fashion in a snotty op-ed published on WWMT-3 in Kalamazoo, Michigan. The article, which was headed with the telling title, Trump Repeats Claims of Fraud while Biden Calls for Unity, portrayed the President grasping at straws, listening to the Pennsylvania Hearings with a small cadre of fanatical loyalists. The author, James Rosen, is a long-time journalistic hack notorious for publishing in Left-Wing echo-chambers; and he had this to say:

"Mr. Trump, seated in the Oval Office, dialed into the cellphone belonging to another of his attorneys, who held the device up to Giuliani's microphone so the attendees could hear the president's unscripted, often rambling ten-minute monologue. 'This was an election that we won easily,' the president said. 'We won it by a lot.' On the live video stream of the hearing offered on the website of the state lawmaker who presided over it, Sen. David G. Argall (R-29), chair of the Pennsylvania Senate's Majority Policy Committee, spectators in the hearing room could be seen applauding the president's defiant words...the hearing contained testimony, at least superficially credible, from seasoned Republican poll workers in the Keystone state who alleged wholesale violations of standard election night protocols. Gregory Stenstrom, a Navy veteran and data scientist from Delaware County, testified that he observed a 'forensically destructive' process on election night that should call into question anywhere from 100,000 to 120,000 votes."

This jackass went on to praise the 'statesmanlike calls for unity' spilling out of Biden's office---as if allegations of over 100,000 stolen votes was no big deal. Also, it should be pointed out that Gregory Stenstrom is not just some software programmer from the Navy, and is a little more than just a 'data scientist'. He happens to be the CEO of Marque Star Corporation---a technology company that he built from scratch in 2011 and has a 'proprietary software system'. The company specializes in streamlining electronic data processing. According to his Linked-In profile, Stenstrom was former Chief Computer Scientist for the Navy's Seawolf  program, British Aerospace, and NASA. He was a consultant for 22 years and Chief Technology Officer for several major corporations across the world. It should be noted that Stenstrom is also a professional deep-sea diver who, while in the Navy Reserve, led an underwater demolitions team---there's a little more to this guy's credentials than Rosen would have us believe. 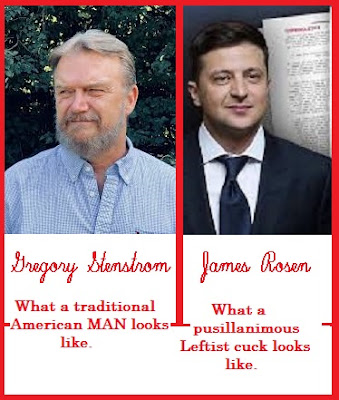 While we're on the subject of pusillanimity, it seems that video footage of Stenstrom's testimony are becoming a little scarce around the Internet. I was able to collect a few fragments of what he told the Committee.

“As of today, 47 USB cards are missing and they’re nowhere to be found… I was told personally that these cards that were uploaded…they didn’t update the vote live in real time. They only uploaded about once every 2 or 3 hours. I demanded they updated the vote so I could see what the result was and it was 50,000 votes — and as a computer scientist, an American and a patriot it doesn’t matter who those 50,000 votes were — I’ll tell you they were for Biden.”

As I understand it, modern voting machines utilize a USB transmitter that communicates electronically with the 'Cloud;' meaning that they both record and report votes at the same time. Now, at least 47 of these cards are missing in one Pennsylvania county. Listen further to Stenstrom's testimony:

"A man who was not a part of the process walked into the vote tabulation center with baggies of USBs. I objected: I said this person is not being observed, he’s not a part of the process that I can see, and he is walking in with baggies which we have pictures of and we have submitted with our affidavits and he was sticking these USBs into the machines. I personally witnessed that happen over 24 times – we have other witnesses who saw it including Democrat poll watchers.”

Yet another specimen of baseless allegations of widespread fraud. This is what the Media Scum tells you isn't at all relevant to the Electoral outcome; and tells the Ameroboobs to listen to late-night self-styled comedians and get their information from them instead. 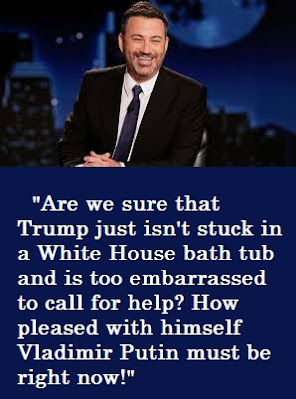 Media vermin like Jimmy Kimmel and James Rosen know full well that these baseless allegations of widespread fraud are in fact true; and more and more of the truth is leaking out every day.

“I personally observed USB cards being uploaded to voting machines by the voting machine warehouse supervisor on multiple occasions. I saw this personally. I brought it to the attention of the deputy sheriff who was there stationed as a senior law enforcement officer and I brought it to the attention of the clerk of elections... In all cases the chain of custody was broken.It was broken for the mail-in ballots, the drop box ballots, the election day USB card flash drives, in all cases they didn’t follow any of the procedures defined by the Board of Delaware County of Elections."

This is the problem with big conspiracies: it's hard to keep them a secret. People see. People hear. People talk. And the more who see and hear things being suppressed by the Corporate Media's mouthpieces, the more they are inclined to want to talk. "The fraud and corruption can no longer be ignored. It was too widespread to cover up." said Rudolph Guiliani as his legal team arrived in Gettysburg to hear further testimony.

Remember here that Stenstrom's testimony concerned one county. Our previous articles on arrests for voter also concerned activities in single counties. When Liberals squawk that there's no way that millions of votes could have been stolen---think of the thousands we're finding in single counties and how many counties there are in the U.S. Yes, it is possible. And it needs to be exposed and the DNC---who was very likely the instigator of these crimes---needs to be proscribed under the RICO statutes and its leaders brought to justice.