In mid-November, Youtube announced an update to its 'Terms of Service'; scheduled to go into effect on December 10th. This has been causing an accelerating panic across the Internet. It's been described as a great purge with an massive number of accounts deleted, demonetized, or 'deplatformed', as Youtube's critics say.

All of this is beginning to remind me a lot of Y2K. For our younger readers who might not remember this: this was an Internet panic which began in the mid-1990s. The theory was that the entire Internet was going to collapse on January 1st, 2000 because computer databases couldn't recognize the date code change from prefix 19- to prefix 20-. Since the US was already computer-dependent back then, there were supposed to be mass riots, banks crashing, the government paralyzed, etc.

Not being especially tech-savvy Y2K was a concern for me too back then. But 1998, I was interviewing some surviving WW1 veterans on the 80th Anniversary of the Armistice. I asked one old soldier about Y2K and, after explaining it to him, the Nestor declared without batting an eye, 'It's a hoax.' I asked him why he thought so, and he laughed and said, 'Computers won't recognize the 21st Century? Son, I was born in the 19th Century! Never missed a government check yet!" I never worried about Y2K after that.

It's a shame that our culture despises the elderly so much. We often learn a lot of common sense from them.

The Youtube update crisis sounds quite similar. The user forum on their parent company's (Google's) site explains: "Starting from December 10, 2019, our Terms of Service are updated globally. (If you live in the European Economic Area or Switzerland, your terms were updated on July 22.) These updates are to make the Terms of Service easier to read and understand. There’s no change to your experience on YouTube, the features you have access to, or, if you’re a monetizing creator, how you’re paid."

So the updates have already been in effect for 5 months in Europe with no adverse effects? Granted, EU laws already are more restrictive on content than the US. But their laws have no authority over US domestic content. All of that aside, however, people seem to have forgotten that Youtube is a private company; and that the American economy is premised upon free enterprise.

"According to economist Milton Friedman, the primary role of a business is to maximize profits for its owners. It seems YouTube has doubled-down to commit to this. But YouTube is not just any business. YouTube holds a monopoly over the video-sharing industry, and although it has been challenged by smaller apps such as Vine and TikTok, it still holds a great hegemony in video-hosting. What further solidifies YouTube as the supreme video-sharing program is that it is owned and backed by Google, an internet behemoth in of itself.

"When a single business holds a monopoly over an industry, it means alternatives cannot easily challenge it. When that happens, it is easily able to determine its own ethics in the free market because users won’t be able to flock to alternatives for video content. However, the very conditions that allow YouTube to maintain hegemony are those that also call for ethical restraint and protection for the masses against abuse. And when one entity holds disproportionate power over others, it becomes more and more plausible to invite regulation — in this case, by the government."

First of all, Youtube is not a monopoly---the dominant company in its industry, yes---but not a monopoly. Alexa Rankings show that Youtube is the 2nd most visited website in the world; but Dailymotion, Vimeo, and Twitch all rank in the Top 200; Twitch at #41. It also seems a bit hypocritical that Slate---which is a subsidiary of international conglomerate Graham Holdings Corporation and an Amazon 'partner---should be complaining about monopolies. Incidentally, Slate's Alexa Ranking is #1,348.

If the writers at Slate had spent more time reading Milton Friedman, they would have learned that industries typically become dominant during times of technological innovation. Entrepreneurs in a free market quickly move in and try to compete with better services. That's actually how Youtube came about. Fifty years ago, in 1969, nobody believed that anyone could compete with Network Television---and CBS was dominant then. By 1979, Cable TV became available and by 1989 Cable was more profitable than the networks. By 1999, we had the Internet and technology for live video streaming. Youtube was founded in 2005. In 2019, we have cellphones capable of recording and sharing videos.

Friedman also pointed out that dominant companies which fail to practice "ethical restraint and protection from abuse" tend not to stay dominant very long. That is unless they have "invited regulation from the Government" which usually protects them from competition.

The Alt-RINOs like Vox Day, Owen Benjamin, and Gavin McInnes have subscription services and naturally are fanning the flames to boost subscriptions. 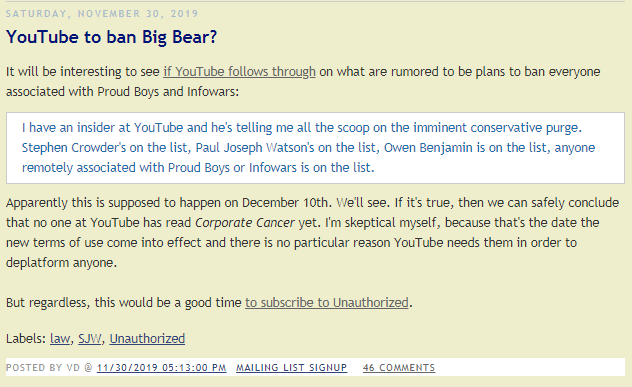 Vox Day and Owen Benjamin both have interest in Unauthorized TV, another of Vox' shady affiliates, headquartered in Zug, Switzerland. Unauthorized's Terms of Use are even more restrictive than Youtube's. With Youtube, you can appeal a suspension. Unauthorized's terms tell you to appeal to the EU bureaucracy. Not only that, but they have a dubious legal clause which reads: "We are not obligated to participate in an arbitration process and are unable to offer you the opportunity to participate in such a process." If that isn't clear enough, another clause reads:

This 'purge' is very likely not to happen and Youtube will still be standing after next week.
Posted by The Night Wind at 10:53 PM