Those who haven't had their heads in the sand and are facing the fact that vested interests are in a state of full insurrection against Civilization have no doubt come across the term The Great Reset in their researches. I haven't referred to it much for a couple of reasons. One is that the theory's proponents posit that the ringleaders of the Insurgency plan a Global takeover. Now that may be (and likely is) the truth; but I've been concentrating on trying to stop them here in the United States. Up until the 2016 Election, the Elites were already organizing control of the US and President Putin and his Allies in Asia were the only forces left fighting for freedom in the world. After Obama was defeated by the Allies in Syria and in the South China Sea; and after Trump was elected, the New World Order forces were decapitated and forced to reorganize. If the Deep Statists regain control of the United States in 2020/2021, they will make certain this time that there will be no Reagan or Trump emerging to frustrate their plans and we will again be without domestic leadership.

The other problem with the term is that Red Pill jugheads like Owen Benjamin have co-opted the term and applied it their seriously deranged ideas on 'hidden history.' We'll deal with the Red Pills later: throughout this whole Rebellion they've been acting like a bunch of dung-flies buzzing around the manure pile. 💩

Today, however, His Excellency Archbishop Carlo Vigano became the highest-ranking world leader to use the term openly. The Archbishop formerly was the ambassador to the United States during the Obama Administration and personally witnessed first-hand many of the Deep State machinations. 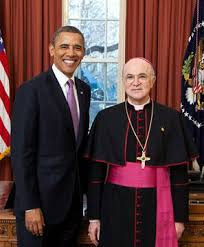 The Archibishop has never been quiet about exposing the crimes of the Left. After his term here ended, Pope Benedict appointed him a sort of special investigator into the Globalist Conspiracy. Today, Vigano published an Open Letter to President Trump, which deserves some serious attention. 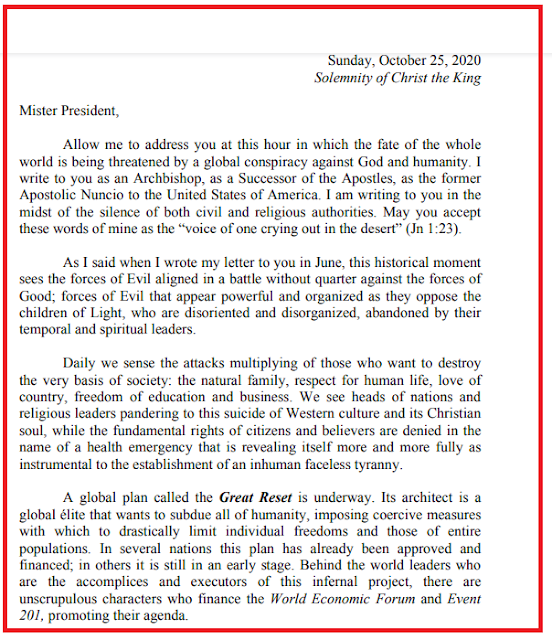 Vigano is absolutely right. The WEF this year openly stated what Vigano accuses them of. The WEF and the Bill and Melinda Gates Foundation also financed Event 201, which outlined a plot to employ an alleged pandemic as a means of seizing power. The event was held at Johns Hopkins University in 2019 under the pretense of a National Security exercise. Now before the scoffers come on with their pooh-poohing about Gates and his camarilla simply bringing awareness to a problem, I would ask: How do we prepare for a pandemic when we don't know what form it will take? A pandemic of Cholera or Typhoid would be dealt with much differently than one of Influenza, for example. But the NPCs in America believe what they see in the Media---where all epidemics are equal. Here the Archbishop explains the agenda of these fools in vivid detail. He also isn't exaggerating that the fact that several Western nations are already nearly submerged in brutal dictatorships---nations that once were democratic but now have about as much freedom as Communist police-states once did. Australia is one prime example.
Israel is not only degenerating into dictatorship under its mad leader Netanyahu, the country has become one of the world's main suppliers of domestic espionage equipment. And in Hungary---the country that the Red Pills all admire as a model of good government---we hear that "On March 30, the Fidesz parliament passed an emergency law granting the government indefinite, sweeping powers. The new statute goes well beyond those emergency statutes passed just about everywhere in Europe during the present crisis or indeed in any EU country ever. Amid the pandemic, leaders across the continent have delimited standard civil liberties, but they are checked by critical legislatures and have explicit, short-term timeframes. The Hungarian law enables Orban to rule by decree, bypassing the legislature on any law, as long as the crisis lasts. All elections until then will be suspended. Moreover, the statute allows the government wide-ranging discretion to censure media that it claims obstructs the state’s response to the pandemic. Journalists found guilty of spreading supposedly false information can face jail sentences of up to five years."
And as far as health passports go, France has been imposing them since April.  Some American states, most notably Kentucky, experimented with the idea until stopped by the Courts. 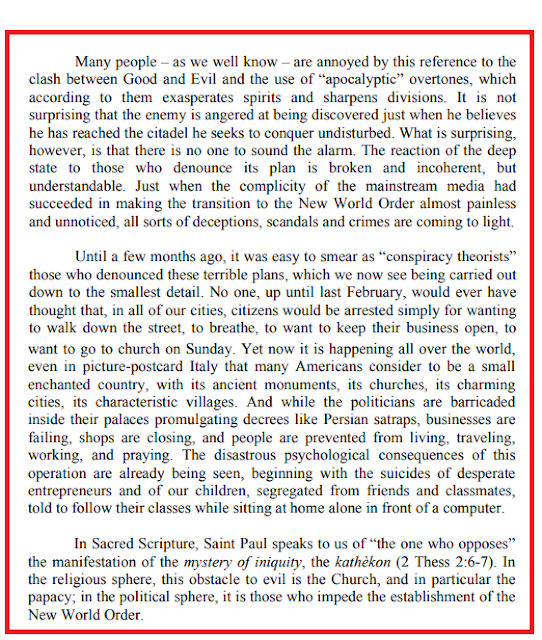 One place where I might disagree with His Excellency is what he said in the first sentence. While it is true that it's fashionable today to sneer at traditional definitions of Good and Evil, the Corporate Media has very much invested itself in redefining the Devil and his works. Depending on the audience, Satan is either portrayed as a cool, hip, and debonair character who runs nightclubs, has a lot of friends and even does a lot of good for folks; or else he is depicted as an invincible force: sort of an avenging angel sent to punish all of us for our White Guilt, or Climate Change, or other offense against Political Correctness. Regardless of the circumstances, anyone who really considers the Devil to be an enemy is portrayed as a kook, a fanatic, a uneducated bumpkin, etc. Those portrayals all speak volumes about the character of the American Media. 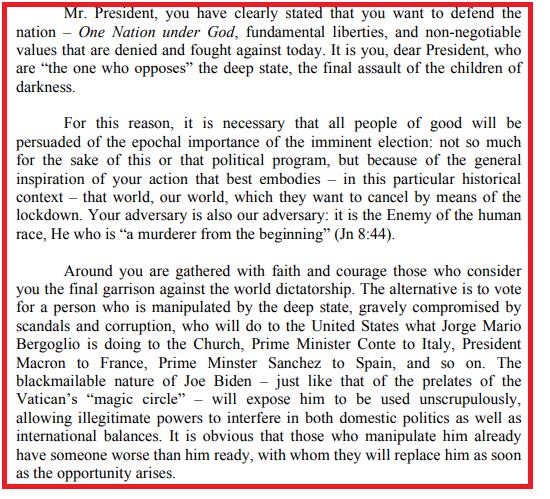 This is exactly why we now have to rally around and support President Trump and his efforts---including stopping Team Biden from stealing the Election (which they are now in the process of doing). The Archbishop correctly defines Biden's fate: as I've believed all along, he's merely a figurehead whom the Insurgents intend to dispose of once they've no further use for him (i.e. winning the Election).
However, Vigano ends on a note of hope. This is something I feel is addressed to all of us in these dark times, not only to President Trump: 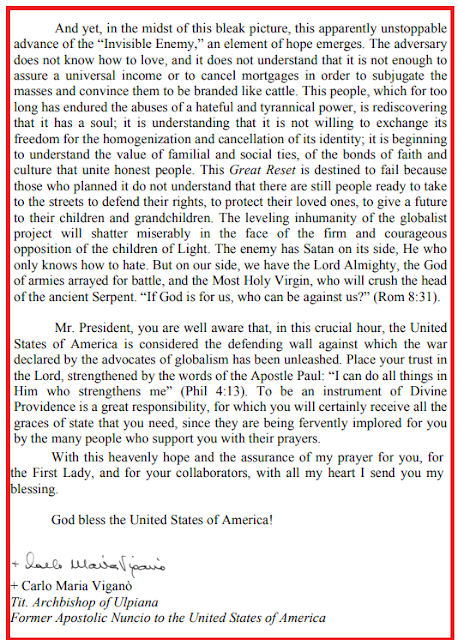 The weakness of the Deep-State Elites is that they are very stupid people who are also too arrogant to realize their own humanity. They falsely believe that wealth and power makes them superior to the common herd; when in reality their obsession for maximizing wealth and power is only a neurotic ego-defense which keeps them from seeing themselves as they really are. They fear exposure worse than anything else, which is why "the children of the Light" are such a threat to them---no matter how humble a station in Life various of those children possess. The Light exposes them, and for that reason they are often paranoid of people whom a normal, well-adjusted rich and powerful man wouldn't fear in the least and might even befriend.
Their paranoia is what makes them power-mad and their mania to stamp out human goodness is really a neurotic compulsion to evade the realization that the evil that they really want to destroy is within themselves. Behind the camouflage of media smokescreens all there is is a collection of petty crooks, bullies, perverts, and crackpots. We have to guard against the trap of fearing them.
We also have to guard against the trap of falling for media propaganda and actually following them. One of the things that the Elites are actually good at doing is deception. We've seen how easily tricked people were by the Scam-demic. It can happen to anybody---I'll even admit here to being taken in by the Iraqi WMD Hoax a decade or so ago. "The adversary does not know how to love" as the Archbishop says, and sooner or later the scales fall from honest men's eyes because as Christ taught us, "By their fruits you shall know them."