The Red Pills---depending upon one listens to at a given moment---generally have been rampaging online during the whole COVID 'crisis'. Owen Benjamin---who doesn't even believe that viruses are real, let alone COVID, has been spiraling pretty badly lately. He's a subject for another article himself: but in the meantime, our friend Ipse Inquisitor has released his promised documentary  on the Bear Cult. Check on the link: it's quite informative---especially his exposes on how dangerous and fanatical the Cult really is.

Others, like Vox Day, have turned the whole affair into a grand LARPing adventure. Vox has been courting Agent Q's followers again and predicting some great social cleansing is imminent. This belief apparently has been bolstered by the early release from prison of Robert Beale (Vox' father). Father Beale apparently has been experimenting with medical technologies in his leisure time, so his parole is quite timely.

So, over in San Pedro on Thursday, a railroad engineer with the Pacific Harbor Line ran a 4-axle, 150-ton locomotive off the tracks with the intention of ramming the US Navy's Hospital Flagship, the USS Mercy. The Mercy recently was stationed in the Port of Los Angeles on President Trump's orders in case the COVID panic led to hospital overloads. 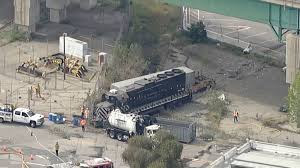 The engine crashed through several fences and damaged a truck; but nobody was injured. Without any traction, a massive machine like this sinks into the ground fairly easily---it's the reason they put treads on things like bulldozers and military tanks. Eduardo Moreno, the 44 year-old driving the train apparently didn't know this; and he fell about 250 yards from his target. Apparently, he also didn't exactly know how he could launch from the dock to the ship if he'd reached it either; but as the Pizzagate shooter said after getting caught, "It wasn't a very well thought-out plan."

According to reports, after the engine bogged down, Moreno leapt from the cab and fled, but was captured by passing CHiPs Officer Dillon Eckerfield, who witnessed the scene and wrestled Moreno to the ground. He was turned over to the FBI, as Railway Sabotage is actually Federal Crime. To put it mildly, Moreno is in some real trouble.

In an interview with KVIA-7, an FBI agent stated that Moreno fully confessed. '“You only get this chance once. The whole world is watching. I had to,' Moreno told police, according to prosecutors. 'People don’t know what’s going on here. Now they will'...Moreno stated that 'he did it out of the desire to ‘wake people up.'

“Moreno stated that he thought that the U.S.N.S. Mercy was suspicious and did not believe ‘the ship is what they say it’s for,' the Complaint said."
Vlogger Davey Crocko, who's been producing some exposes about Q Anon lately, noted on yesterday's podcast that Moreno was spouting soundbites which have appeared recently in Q-related threads; and that there has also been much discussion there about USS Mercy and its true purpose.
The Affidavit noted that: "Moreno said he was not sick, but he had been watching what was going on with the COVID-19 coronavirus pandemic and the medical ship. He said he was 'putting all the pieces together,' and 'they are segregating us and it needs to be put in the open.' Moreno said he was pushing the last train car of his workday at the yard with his locomotive on March 31 when he started thinking about everything and just kept going and going. Moreno told police, 'I don’t know. Sometimes you just get a little snap and man, it was fricking exciting I just had it and I was committed. I just went for it, I had one chance.'"
Doesn't that sound just about like every jailed (or deceased) Red Pill we've ever covered who's done something like this? Video from inside the cab shows Moreno cheering as he crashed through barriers and making obscene gestures at the stunned onlookers. 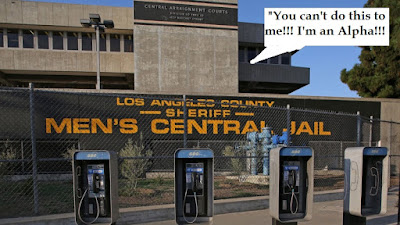 According to Heavy.com Moreno was married and his wife appears to be a rather forceful COVID-19 'Shelter-in-Place' fanatic. All of the red flags are there: a middle-aged man with a routine job and a domineering spouse who's been listening to online radicals encouraging him to make the big play and be a hero of their 'New Order.' Masculine Psychology comes with an innate fear of insignificance and many cults, like the Red Pills here and the Wahhabis in the Middle East prey upon that very fear.

Vox Day, one of the ringleaders of the Red Pill Cult commented on the story that "it's not weird at all." And he also noted today that the social disruption caused by COVID is "the best pandemic!" Just three days before the train crash, Teddy Spaghetti had this to say:

"It’s been instructive to see how banning the blackpillers and pessimists not only improves the tone of the discourse, but boosts everyone’s morale. So, it is time to speak forthrightly on the subject. I will no longer tolerate those commenters given to negativity and despair. They will be banned without hesitation.  "Hope, whether it is based on a sound foundation of truth and reason or not, is to be vastly preferred to the incessant pessimism of those who are afraid to hope because they fear being disappointed more than they fear being defeated. Those who always ask of every possible positive interpretation 'but could it be a trap?' are narcissistic cravens driven primarily by fear and self-absorption.  "Things may not always turn out as well as we hope. They almost certainly will not do so. The world is fallen, after all, it is ruled by an immortal and malignant narcissist, and our vision of the future is very far from perfect. But the one and only way to absolutely ensure defeat is to refuse to enter the ring. It is better, by far, to enter the ring full of false confidence and go down fighting than to refuse to enter it at all for fear of being beaten.  "So, this is fair warning being given to those who are inclined towards pessimism, defeatism, and despair: this is not a place for you. You may be right, in the end, but I don't care in the slightest. If we ride to doom, in any case, we will ride. You are welcome to cringe and hide and attempt to be the last one devoured by the flames of Surtyr. But if that is your goal, then this is not the place for you and you will never be one of us."


So there we have it. It's unknown whether or not Moreno was a reader of Vox Populi, but his statements certainly reflect the same sentiments. This is Vox' version of the Apocalypse: which given the reference to Surtyr, more closely resembles the Ragnarok of Nordic Paganism than the Paradise envisioned by St. John. These clowns imagine themselves great heroes---the defunct Chateau Heartiste Red Pill blog used to envision a utopia run by men who were "warrior-poets," Alphas like the Samurais in feudal Japan. These silly New Age pagan motifs are strewn throughout the writings of Vox and other Red Pill pundits. They disguise it with Christian sloganeering. As Roosh Valizadeh, a former Red Pill chieftain who freed himself from the cult wrote:

"All lifestyles, with no exception, cause disease by their very nature, because they separate you from God. They are designed to fill you with worldly distractions, pleasures, and fame. Even if you don’t actively worship Satan, if you are not consciously serving the will of God, you are serving the will of the father of lies. Satan will approve of any lifestyle you choose. If you participate in anything that could even be construed as a lifestyle, or one where a corporation sees you as a marketing opportunity or audience segment, you have fallen for a lie, and will undoubtedly suffer as a direct result of your behavior. There is suffering even if you are a practicing Christian, but that suffering does not stem from your own lifestyle choices."

That's a very prescient observation: and a man who falls into this whole Alpha-Lifestyle trap is going to deeper and deeper into a demonic fantasy haze until they end up shooting up pizza parlors, wrecking trains, or drinking Pine-Sol to cure their perceived sexual deviancies. There's a difference between reality and LARPing and when men loose sight of that because of their own insecurities, disaster is sure to follow. 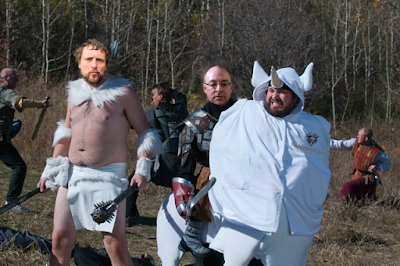