For the second time in six months, there has been a mass-shooting in The Netherlands. Details are still coming in as we write; but according to a social media post by Dordrecht Mayor Wouter Kolff, the situation is "very serious." Deutsche Welle reported that three people have been killed and at least one wounded; and that the shooting took place inside a residence. 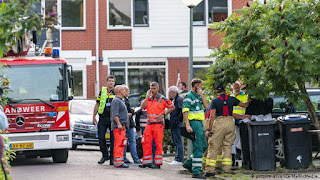 An earlier shooting took place in March of this year, when a gunman opened fire on a commuter train. Four were killed and six were injured in that attack.

There will be more details as the news develops. But what ought to be noted for us Americans that these shootings occurred in a country that has the strictest gun control laws in the European Union. According to the Dutch Ministry of Information:

"In the Netherlands, the possession of all firearms and other weapons is prohibited. Non-firearms include various types of knives, fake weapons, realistic-looking toys and air weapons, electroshock weapons and self-defence weapons. If you want to own or trade in weapons and ammunition, you need a weapons permit. There are 4 types of permits: recognition, consent, authorisation and dispensation."

The first of these two permits pertain to commercial uses of firearms. The latter two are two separate licenses a Dutch gun owner needs. The 'Authorization Permit' is a license to transport a weapon. The 'Dispensation Permit' is required to own one in the first place. As one might imagine, getting a permit of any kind isn't especially easy. The Ministry states:

"The application procedure for weapons permits is subject to strict rules:

The police chief will decide on the basis of this information whether you will be granted a permit or not."
Among the criterion for obtaining a permit, one must explain to the Police Chief his reasons for wanting to own a firearm. Self-defense is not considered a valid reason in Holland. The only reasons acceptable to the Dutch bureaucracy are for hunting and target-shooting. For hunting purposes, one must pass a government-approved safety course and be granted a hunting license first. This has to be done annually. The Ministry of Information notes that even "People who have one or more permits issued before 1 September 2017, and only from before that date, must go through the new procedure once."
For target-shooting purposes, the Dutch require that one be a member of a government-approved shooting club for one year before a permit to own a .22 rifle is allowed. One can own larger calibers based upon how many years of membership they have. BB and Pellet guns are illegal unless one is over 18 and a member of an organization approved by the National Dutch Airsoft Association.

Dutch law restricts the maximum number of firearms one can own at five. They must be stored in a gun safe, and a condition of the Gun Permit is that the police come to your home once a year for a mandatory inspection.

We mention Dutch policy here for two reasons: one, to show that gun laws don't really work. The second is because, after every mass-shooting in America, the Internet chat rooms and message boards are flooded with Europeans lecturing us on how we need tougher gun laws like they have. In fact, American pundits were bragging (shortly before the March shooting in Holland) that gun ownership in The Netherlands was at its lowest level in 12 years. That news must have put psychos on notice that Holland is safe place to go on a rampage.

Gun laws in general are simply a knee-jerk reaction; politicians doing something for the sake of doing something. The American Gun Control Act of 1968, one of our strictest gun laws, was enacted for no other reason than Lee Harvey Oswald had purchased a rifle through the mail. Of course this law hasn't stopped a politician---or anybody else for that matter---from being shot since. Only six years after the law designed to prevent future Oswalds was enacted, President Ford was nearly shot twice; and six years after that, President Reagan was wounded in an attack.

But don't expect the Corporate Media to mention any of this in the wake of the Dutch shooting. Just like they routinely ignore gang violence in Liberal dominated cities, they won't report this either.