So I realize that the big news this weekend is supposed to be about Afghanistan. All we'll say about it is that it should be kind of a wake up call to Ameroboobs and NPCs that, after 20 years of building an 'American-Style' Politically-Correct Corporatist State, the Afghan people wanted the Taliban to return. The Taliban was actually quite unpopular there until the Afghanis got a taste of American Exceptionalism. Deep State hubris and arrogance has exasperated the people to the point where they've swung completely in the opposite direction. It was just like East Ukraine: the people reacted to the prospect of Obama/Soros Liberalism by reverting back to Communism.

So there's really not much of a story there except for the Controlled Opposition (i.e. the Republicans) to squawk about on social media. The rats who comprise our Ruling Elite aren't going to suffer any shortage of dope or human trafficking victims because of the change in government; and they can bring home military resources to be employed domestically enforcing their future draconian laws.

Meanwhile, looking into the downfall of Taliban-praising cult leader Ted Beale (aka Vox Day), it appears that The Supreme Dark Lord isn't gaining a lot of sympathy from anybody outside of his own echo-chambers. This was another reason for Vox' collapse. Cult leaders inevitably start believing their own blather and the cult drifts away from attracting people who might see something potentially beneficial in joining to greater emphasis on obedience to the leader and stoking his ever-expanding ego. Anyone who followed Vox from 'Gamergate' to the present can't help but have observed that his followers of Dread Ilk was becoming older, more exclusive, and less relevant. Predictably, Vox is blaming all of his misfortunes on 'Gammas.' 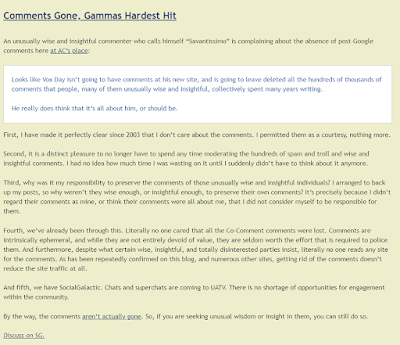 Frustrated, Vox turned to his Asiatic counterparts' victories for solace today."The Imperial USA has not yet been destroyed, but this marks another step toward its eventual collapse. The nations are rising!" Teddy Spaghetti impotently bellowed, "The Taliban’s political agenda is almost disturbingly viable in the West! They are killing thousands in the areas they have taken over! They have just issued a list of people who civilians need to report to them so they can be executed. Let’s face it, that’s a more compelling platform for the average populist than anything the Democrats or the Republicans have on offer these days; which suggests, at this point, a Taliban-endorsed candidate would easily defeat Joe Biden in a fair election."
Many have been inclined to blame Vox' undoing on some of his recent anti-vaxx posts, but I doubt this. I've written posts against the COVID vaxx too, and so have others who publish on Blogger. It's caused a lot of shadowbanning on Google's search-engine and some rather suspicious activity on the Stats Sheets, but overall Blogger hasn't been nearly as aggressive as Youtube, Twitter, or Facebook in demanding conformity to the official narrative (so far). I tend to think that Vox got in trouble because of some questionable fundraising that he was doing on the site. He's come under a lot of scrutiny for fundraising projects which have never materialized, as well as mysteriously hitting fundraising goals with multiple large donations of questionable origin.

Even the projects that Beale & Co have delivered on have been of unbelievably inferior quality given the amounts of money allegedly raised. Infogalactic, which was supposed to dethrone Wikipedia, isn't updated regularly and has blank topic pages all through it. After four years, Infogalactic hasn't even surpassed Wikipedia's Esperanto translated pages in views. Unauthorized TV was another scam. Vox took donations and sold subscriptions to set up a Youtube 'alternative'. He got caught using Vimeo's (free) video production services to produce his material and charging subscribers for what he made for nothing. Then there was his pathetic Arkhaven comics. Vox has allegedly raised 100's of thousands of dollars to subsidize this venture and produced some of the worst-written and most poorly illustrated work in industry history. He never even bothered to market the series through comics distribution companies and his impact on the industry have been negligible. 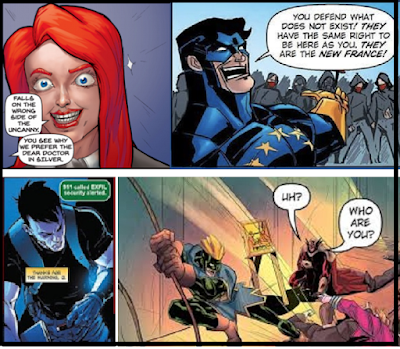 Vox' latest great earth-shaking project---which finally likely brought the curtain down upon him---involved a plan to preserve the world's greatest literature for all his Alpha followers (whom we're told are all superior intellects) bound in high-quality leather for a massive price tag to purchase all of the equipment and materials for such an enormous venture. With the world plunging into the Dark Age of illiteracy and ignorance, it's a great investment in the future to keep the Lamp of Learning alive for a cost of around $400-$600 per volume; so that classics such as SJWs Always Lie and The Corroding Empire will not be lost to history.

If Vox' deluded followers had only left the Echo Chamber long enough to do some research on their own, they would have found that there are companies in India already doing that---for a fraction of the price. I recently purchased two volumes from this company: one of a book that had been out of print since 1854 (price $11 with free shipping to US) and another which had been discontinued in 1925 (price $7 with free shipping to the US). Both were facsimiles bound in high-quality paper, like the old 'Dover' paperbacks; but they could be ordered with custom leather binding for around $40.

Someone mentioned the other day that Vox should put his Hot Dish skills to use and start an 'Alt-McDonalds.' Fast Food Free of SJW Convergence could be their slogan. All Vox would have to do is purchase dozens of Big-Mac Combo Meals at the local places, then re-sell them at his place to Alpha chumps for $100 a plate. He could probably even get Owen Benjamin to play a Sigma version of Ronald McDonald. 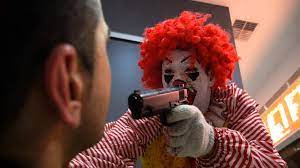 Another possibility is that Papa Spaghetti could tap into one of his Swiss Bank accounts and relocate Vox, Owen, Rollo Tomassi, and 'deplatformed' Red Pills like Andrew Anglin, W.F. Price, Dalrock, and Heartiste to Afghanistan to set up shop. The Taliban are fairly based and Red Pilled in their sociopolitical outlook. True, their religious authorities are bit puritanical and might frown upon some of the Western Red Pills' rather unorthodox spiritual views; but if ISIS clerics were typical of this breed of clergymen, they could probably be persuaded to issue some dispensations for an acceptable consideration. When the Taliban were in power before, Afghanistan had a reputation as country where those who were driven out of their native lands by outraged neighbors could find welcome and refuge. Given that Vox has apparently been chased out of Italy; Owen has been chased out of every community he appears in in America; Matt Forney is being chased out of Hungary and nearly all of them run off the Internet---the new Islamic Republic could present a golden opportunity for a comeback.
In the meantime though, this might be an opportunity for the rest of us to think about ways to rebuild the Manosphere into a useful vehicle to guide and influence men again.