While the rest of the Western World continues its headlong plunge in despotism and degeneracy, and the Ameroboobs occupy themselves with drugs and distractions, the rest of the world outside of the Great Reset's clutches have been seeking solutions. One I've been watching over the last week or so has been the annual Valdai Conference held in Sochi, Russia. President Putin spoke at the summit, his speech was about 30 minutes followed by a long question and answer session. Personally, I can't even three minutes of any American politician, but with Putin one can handle three hours easily.

It was refreshing watching a real leader again, and one who offered actual ideas instead of more Newspeak. It was noteworthy how few masks were seen in the crowd. While we in the West have been locking down even harder, countries like Russia and China have long ago reopened. 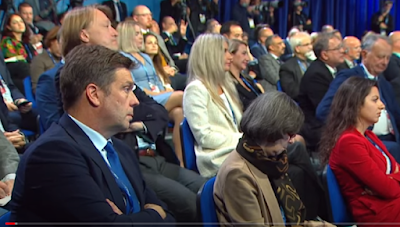 Though President Putin did speak of the so-called Pandemic, it was also noteworthy that he used the past tense. Russia had less than 1,000 confirmed COVID deaths, and never mandated a Vaxx or a Passport. Of the 'crisis' itself, Putin pointed out that all crises present a time of both danger and opportunity. He quoted the Russian proverb: "use your mind to fight danger and your experience to find opportunity." That we are in a time of change, can't be denied, Putin stated, but the global Pandemic proved that top-down models no longer work. His general thesis was that global issues depend upon the strength of sovereign nations and the families and cultures which uphold them.

"We need to work together to address global problems, as nations, regardless of our ideologies," Putin said. "But again, those are just words. In reality, we are seeing the opposite and the Pandemic has bolstered the negative social trends in the world that had started some time ago. It's actually becoming worse: the idea that you only care about yourself and your own interest is becoming ingrained more and more. Actually, it's being conspicuously shown everywhere, that you only care about yourself...but a time will come when international stability will be just as important as domestic stability.

"When I said that we shall base our approach on 'healthy Conservatism' several years ago, the international situation was not as hot as it is today. Even now we're seeing that this healthy, natural Conservatism is being threatened and destroyed: the very fabric of reality has broken down. We're not talking about freezing the current state when we talk about Conservatism. We are talking about relying on time-tested traditions; on helping our nations maintain good birthrates, keep priorities and set goals which achieve the maximum well-being of a nation. It also involves not accepting and not inviting extremism in any way...we remember from our history that the price we pay for unbridled change is very high; that sometimes it leaves behind moral ruin upon which nothing can be built."

It was indeed refreshing to hear a political figure call out the fake Conservatism that is rife in the West right now. Conservatism in this culture doesn't approximate the ideal of reliance on time-tested traditions. Conservatism here means a sort of separation between ideals confessed in public and deeds done in private.

From the Clinton Co-Presidency onwards, the Whacko Left Wing has pushed the false philosophy that "the personal is political." The Right seems to have gone the opposite direction; where the political becomes irrelevant when personal gain is involved. That attitude does nothing to advance the state of society.

"We have seen many proposals and concepts promoted over the last decade that the concept of 'government' is an anachronism, that it is no longer viable, that it is an obstacle to prosperity. But as I've said before, the people who liked to say that were people who advocated breaking up borders and using their competitive advantage to influence others. But once it turns out that someone was more successful than the rest; they immediately closed down borders...and of course we saw that even when sovereign states opened their borders to them, there was no actual development."

Likewise, it led to no actual development here either---aside from the fact that wealth has been transferred on a scale never before seen to the point where private power holds more influence than lawmaking bodies. They've achieved by runaway inflation and fake 'deregulation' which selectively eliminated competition. And today Conservatives are having to face the fact that their own greed and indifference to its effects on others led to this situation. But the Right isn't alone in its responsibility:

"Some believe in the U.S. that reverse discrimination; that altering your own history; or denying such basic things as 'motherhood' and 'fatherhood'; or even biological sex is something good: a process towards positive change. That's their business to make these decisions in their own country, but we Russians have a different opinion...they have a right to think so there; let's see how successful they are with that. But what they are proposing is not even new---we've seen in our own history that the Bolsheviks of the 1917 Revolution wanted to change the traditions of our society, to go so far as to abolish the idea of family. And incidentally the Bolsheviks were completely and utterly intolerant of the opinions of others. I think that should remind you of what we're seeing in the West. In fact, what we are observing there are the practices which we wish that we had left far in the past.

"Sometimes what we see as a way out only exacerbates the problem. Our history in Russia shows that. In the new world it's very important to have a foothold on your culture for your history and your traditions...things that are alien to us should not be accepted and we should not allow others to dictate to us what we should be culturally, politically, or economically."

"Any 'New World Order' should be based on sovereign states and underline the importance of sovereignty...it shouldn't be based on imposing your own values others by calling them 'universal values.' Obviously, when a real crisis comes, there's only one universal value: and that is human life, and each nation must decide for itself how to protect human life based on its culture and traditions and its history.

"We understand that without close cooperation many of the current global issues cannot be addressed or resolved. But we also have to be real. Many of the wonderfully-worded slogans about addressing change and addressing problems that we've heard since the late 20th Century will never be implemented. Global decisions require national sovereignty to be transferred to international bodies on such a scale that nobody's going to do that. "

And that is why, in these dark times, there is hope. Though Western Civilization seems bent on self-destruction, there are others out there---major powers at that---still holding firm.

"After the end of the Cold War, certain parts of the World felt that they were the 'winners' that they had reached the proverbial Olympus but now they feel that they are losing ground and they are trying to fight this change but it's impossible...The crisis that we're dealing with is a conceptual one; it's of civizational nature. This is a civilizational crisis; a crisis of approach, a crisis of principles which define the future of humanity on this planet."

The Regime, of course, has been taking counter-measures; reimposing sanctions against Russia, establishing the AUKUS Defense League, attempting to expand NATO hegemony into the the rump-Ukraine and fomenting strife in Belarus. They have also revived Obama's failed Asian Pivot to contain the NWO's other major threat, China. Their mistake is believing that every race of people is as eager to sell themselves as Americans are; or that all societies are as weak as America's. Their hubris is their Achilles' Heel.

We'll have some future articles about some of these efforts abroad to push back. 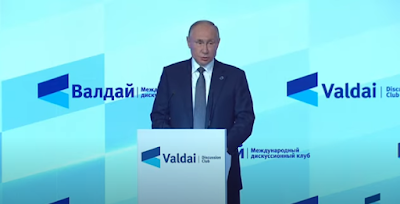