A year ago today, the US Government was overthrown in a fraudulent election and the Republican Party---led by Mitch McConnell, John Roberts, Mike Pence, and Lindsey "shoot-them-all-down" Graham---sold out their constituencies and adapted themselves to the New Order. And today, a year later, Pence was in Virginia, cheering and carrying on about a "Republican Comeback"  because his masters allowed some of their stooges to campaign as Republicans and win the Virginia Elections.

This a variation of an old game that Deep State politicos played during the post-Reagan Era. They would appoint Democrats like Clinton and Obama to shove their agendas with an Iron Heel upon Americans' throats; and when they became unpopular as a result, they would inject RINOs like the Bush Family into the mix to continue the same policies. The RINOs have the advantage of being able to fix a 'Conservative' label on unpopular programs and make them look palatable. Make no mistake about it: Virginia means nothing. It's all for show, and probably was permitted to quiet critics who keep claiming that elections are somehow rigged. Like other political pawns, Terry McAuliffe will get reassigned somewhere else.

As for his successor, Glenn Youngkin, the first sentence of his Wikipedia page tells us everything we need to know: "Prior to entering politics, he spent 25 years at the private-equity firm the Carlyle Group, later becoming its CEO." The Carlyle Group was founded in Washington DC in 1987 by cronies of then Vice-President George Bush Sr and members of the Saudi Royal Family. Bush went on to serve on Carlyle's Board after 1992. David Rubenstein, one of Carlyle's founders, currently sits on the World Economic Forum's Board of Trustees. Another co-founder, William Conway, is connected with major Federal contractors, United Defense Industries. Former Bush apparatchiks Frank Carlucci and James Baker also work at Carlyle.

The Carlyle Group, it might also be recalled, had shady connections to the Dubai Ports scandal and alleged involvement in the BCCI scandal. The Saudi Binladen Corporation and Dubai World Ports are two of the assets managed by Carlyle. Carlyle currently has a portfolio value estimated at nearly $15 trillion US Dollars. Among Carlyle's top five shareholders are Morgan Stanley and Blackrock; both major banking consortiums which are among the "100 Strategic Partners" of the World Economic Forum.

The Virginia Lieutenant-Governor's race was 'won' by Affirmative-Action appointee Winsome Sears. Yes, the Republicans practice Affirmative Action, too. The RINOs have lately been big supporters of "owning those Libtards" and "stealing the narrative" by promoting as many minorities, women, and LGBTQ's as become available. Besides that, Conservative American men seem to be no different than other postmodern males in that they seem attracted to strong, domineering females. Winsome Sears, who was once one of "our brave men, women, and zhes in uniform, fits the bill perfectly. It's an old trick of Deep State Republicans to pair a colorful or charismatic character with a RINO to stir up their 'base.' We saw it most recently in 2008 by adding Sarah Palin to McCain's ticket and in 2012 when Paul Ryan was posing as an outspoken Libertarian to build enthusiasm for arch-RINO Mitt Romney. 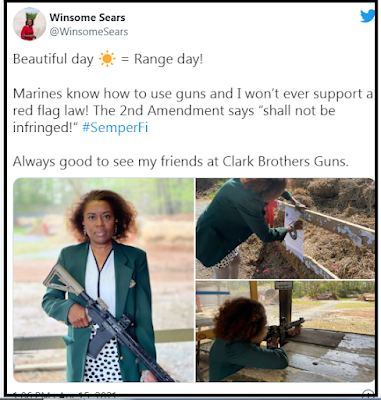 What a clown. Quite visually appealing, though, to the Oedipal Complexes running rife among today's men; and it makes for good optics for Republicans to argue on social media about who's the biggest racist, feminist, though. We can see from the following that Sears' top contributor by far was the Republican Establishment: 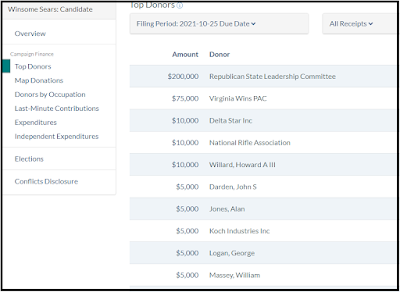 And it also includes a fat donation from the never-Trump Koch Brothers and Obama-era government contractor Delta Star. Then there's Corporate lawyer, John S. Darden who defended many of the Corporations that the Trump Administration prosecuted. There's also Howard Willard, CEO of Agribusiness giant the Altira Group. The three largest shareholders of Altira are the Capital Group, Vanguard, and Blackrock---who incidentally are also among the top five shareholders of Youngkin's Carlyle Group.

Such is the great 'Conservative Comeback': led by Mike Pence, the Bush Family, and the Koch Brothers. Anybody still want to bet on this upcoming 'Red Wave?'