The blog Vigilant Citizen had an interesting article up this week, where he went into some detail (with links) on occult practices within the Pentagon's Psychological Warfare Unit. Of course, most Ameroboobs don't know (or even believe in or care about) the Military's involvement in a program which is of dubious ethics; this even though the Unit issued a recruiting ad just within the last few weeks.

VC points out that the PSYOPS Unit has been infiltrated by Satanic Cults, and has been for a long time. Lt. Col. Michael Aquino, who also founded the Satanic Temple of Set and was a regular contributor to the cult's newsletter The Cloven Hoof, 'served' for several years in Army Intelligence until rising to prominence in organizing the PSYOPS unit under that great humanitarian and Christian, Jimmy Carter. 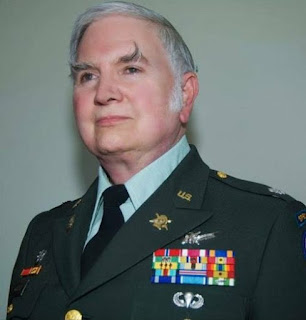 President Reagan ejected Aquino from the Military after the Colonel's cultish activities came to light; most especially allegations of his involvement in the Presidio Child Abuse Scandal, and the Franklin Sex Ring: neither of which have ever been satisfactorily officially explained.
Satanic Cult activities are nothing new to the Beltway Establishment; in fact, people much higher in the Swamp than Aquino also admit to their practice. Even the World Economic Forum has invited occult groups to help them along with their Great Reset agenda at Davos this year. To be honest, though, at this point I'm not certain which is worse: the fact that our self-appointed Elites are doing these things or that---despite all of the personal testimony about---most Americans don't see it as any big deal. It seems a simple matter of common sense that seeing a lot of open devil-worshippers congregating somewhere can't possibly be indicative of anything good going on. Even more obviously, putting them in charge of Psychological Operations should be of especial concern. But here in postmodern America, where today's top-trending news headlines are about the NBA Championships and a new round of free COVID shots, there's little concern about top political officials and economic kingpins running around in black robes and praying to the devil.
Naturally a society disinterested in cults infiltrating the Pentagon are going to have even less interest in whether or not the Federal Government should be involved in Psychological Operations in the first place. The Pentagon of course says that these programs aren't directed at US Nationals, but given that the program seems to be under the thumb of people who have a professed disregard for the Ten Commandments, one might be a bit disinclined to respect their honesty in such matters. As Aquino himself wrote during the Carter years:
“In its strategic context, MindWar must reach out to friends, enemies and neutrals alike across the globe – neither through primitive “battlefield” leaflets and loudspeakers of PSYOP nor through the weak, imprecise, and narrow effort of psychotronics – but through the media possessed by the United States which have the capabilities to reach virtually all people on the face of the Earth. These media are, of course, the electronic media – television and radio. State of the art developments in satellite communication, video recording techniques, and laser and optical transmission of broadcasts make possible a penetration of the minds of the world such as would have been inconceivable just a few years ago.”

Of course, we can trust Satanists not to abuse powers on that level. They would likewise never stoop to deceptions, even though Aquino says:

“For the mind to believe in its own decisions, it must feel that it made those decisions without coercion. Coercive measures used by the operative, consequently, must not be detectable by ordinary means. There is no need to resort to mind-weakening drugs such as those explored by the CIA; in fact the exposure of a single such method would do unacceptable damage to MindWar’s reputation for truth.”

Probably a major reason why the ethics surrounding the use of Psychological Operations is never questioned is because Aquino himself wrote the official position on the morality of its use. Personally, I hold that it is never a moral policy whether used domestically or against real or perceived enemies abroad. The obvious problem with its employment on a domestic populace is that there is no accountability from its organizers---nor can there be in actuality since the same entities controlling public opinion are the ones influencing it to suit an agenda. As Everett Dean Martin stated of these methods even a century ago; "An enterprise so uncontrollable, so susceptible to abuse, and so constantly under the temptation to abuse is a public menace." If such an organization arose in the United States, he predicted that: "One effect of propagandistic methods is to greatly increase the susceptibility of the public to slogans, catch-words, and vulgarly stated half-truths. Every real educator and political philosopher in history has noted the danger of this popular tendency. Now the 'knowing ones' are urged to see this mob psychology, not as a social menace, but as a Natural Resource to be exploited for private gain."

To complete Martin's reasoning after a century of experience, Psychological Operations also tend to form a vicious circle. This actually happened to some extent in Hitler Germany, at least at the Nazi Party level. The Operators have to keep feeding the populace disinformation in increasing doses, which, in turn, dumbs-down and stokes public aggression even more, causing the leadership ultimately to become dependent on the very mob that it created to hold its power.

Contrast that disastrous scenario with a well-informed electorate like we used to have in the United States. We've always had corruption and machine politics in our Government, but up until recently it was getting rooted out and destroyed on a regular basis.

There is likewise no strategic justification for Psychological Operations in Intelligence or Military communities, except to a limited extent. During WW1, Sigmund Freud discovered the causes and treatment of shell-shock. As a humanitarian gesture, the Austrian Government shared that information with the Allied Powers. In WW2, American psychoanalysts were active predicting the behavior of enemy leaders so that we might anticipate their moves. These were a proper use of psychological methods because they were employed to constructive ends like healing the sick and ending the war.

But the way these operations are carried out today are immoral because of their inherent ruthlessness and amorality. A soldier might be wounded in battle and physically harmed for life; a victim of psychological warfare may be damaged at a mental level from which he may not even know exists. It's a dirty form of warfare since it often depends for its success on turning the better---not the worst side---of an opponent's nature against him. Those kinds of actions are not easily forgotten because it brings the fight down to a personal level and certainly is counter-productive to any future peacetime policies.

Another reason against using these tactics is because (regardless of what they may think of themselves), the operators are not infallible. Psychological Operations can, and do, backfire. In fact, when recently employed against Russia, China, Syria, and Iran the tactics backfire on a regular basis. 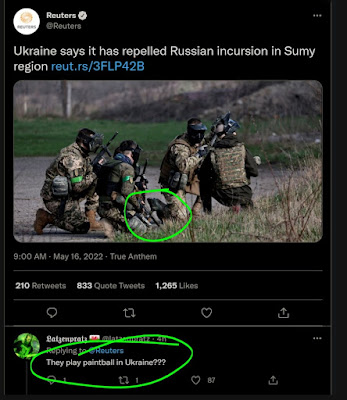 The road ahead is not going to be an easy one. This is why it is vital that we educate ourselves---while we still can---and know the nature of the foes of freedom and humanity. Knowledge is the best defense against Psychological Operations of any kind.