So here in the local news yesterday afternoon, word came the Pendleton Flour Mill was on fire. The granary was totally destroyed. It is estimated that 1.17 million bushels of wheat was lost. Pendleton was operating at maximum capacity, and produced about 600,000 lbs. of flour per day. In February, Oregon suffered the loss of Shearers' Foods---a potato processor---in Hermiston following an explosion. There have been around 100 fires and other destructive events this year alone at food processing plants mostly causing total losses.

Even though the ruins are still smoldering in Pendleton, local authorities have deemed it "a mechanical failure." In fact, nearly all of these cases have been ruled accidental. It's all rather reminiscent of the plane crashes, power failures, and mysterious explosions in the aftermath of 9/11 where we were all assured that "there was no indication of terrorism" before investigators even arrived on the scene. Such was the case of the fire at Forsman Farms in Minnesota last May which destroyed a quarter-million chickens which supplied over 3,000,000 eggs to supermarkets daily. That same week, incidentally, a major grain silo in Prosser, Washington exploded and the Cargill Poultry Processing Plant on the US-Canada Border burned down. One week in April alone saw 22 food processing plants burn down or explode. 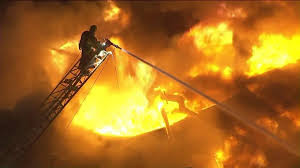 The situation has become so serious that even the jackals in the American Corporate Media couldn't ignore it any longer. They've trotted out the usual collection of rent-a-skeptics fact-checkers to debunk any idea that such fires might be intentionally set. The Associated Press, for example, said of the destruction of Perdue Farms' Soybean Plant in Virginia that "the incident became the latest fodder for an unfounded and growing conspiracy theory alleging that fires at various U.S. food processing plants and other facilities are part of a deliberate effort to undermine the food supply. The baseless narrative has spread widely as Russia’s war on Ukraine has disrupted the global food supply, driving up prices for commodities such as grains and vegetable oils and threatening food security in some parts of the world." Quite an interesting interpretation, considering that "Russia's war on Ukraine" hasn't much to do with the soaring prices of things like beef, eggs, milk, or vegetables. The fact, though that AP's CEO Daisy Veerasingham formerly worked for the Financial Times---which is heavily funded by the Bill & Melinda Gates Foundation---might raise a few more questions, especially since Gates is now the largest owner of US farmland.

The AP article actually made the effort to produce some of the denizens of Academia, Incorporated to lecture us hicks and hillbillies on the Settled Science of the matter.

"David Ortega, a food economist and associate professor at Michigan State University, said ''Beliefs that the U.S. will soon be low on food are simply unfounded.'" Right: all of these gaping spaces on your supermarket shelves that weren't there before are just unfounded figments of our imagination. So are $8/lb. packages of ground beef, $6/doz. eggs, $6/lb. cheese and $7 loaves of bread. 37 States are giving emergency allotments to EBT/Food Stamp recipients because there's no disruption in the food chain.

Ortega, incidentally, also holds a professorship with the Ziejiang University in China, which we're certain has no influence on his opinions despite the fact that China owns about a quarter-million acres of US farmland. Or that agribusiness-connected interests like the W.K. Kellogg Foundation, the Gates Foundation, and a few other shady front-groups drop millions in cash on MSU each year.

Phillip Coles, a professor of practice in supply chain management at Lehigh University said, “The fires were definitely not at the top of my list...labor shortages domestically and global issues such as the Russian war in Ukraine, lockdowns in China and shipping costs, are larger factors." Well, except for the minor detail that the Ukraine Crisis had little to no impact on production---sanctions imposed by the US and its surrogates in European Governments caused more shortages (especially in Europe): a totally preventable situation. In fact, American Corporate looters stole expropriated 20 million tons of Ukrainian grain---which they're sitting on somewhere while prices go up. The alleged 'lockdowns' in China---which incidentally is Corporate Media Fake News as well---haven't affected Chinese exports in the slightest. Coles' profile shows that aside from his professorship, he's moonlighted as a consultant for Agribusiness interests, especially in a government regulatory compliance capacity. Regardless, Lehigh's contributions to agricultural science in recent years has been a little less than stellar, to say the least.

The top award for irony in the AP article though has to go to Vanderbilt Psychology professor Liza Fazio who, after seeing our country experience six years of Trump Derangement Syndrome, several more of Russo-phobia, and two years of COVID-19 panic, actually opined (seriously) that "most Americans wouldn’t know the frequency of such industrial accidents — which means that it’s relatively easy to create a panic over the issue. Everything they hear gets filtered through that lens and people start noticing things that they hadn’t paid attention to before.”

Considering the relative ease with which these Establishment creatures routinely whip Americans into a panic, it might be wise for Dr. Fazio not to broach this topic and apply it to opponents. But that aside, the U.S. is not the only country experiencing 'accidents' with their food supplies. France, for example, is dealing with a series of wildfires especially in the Gironde Region which is an agricultural center in France. The French, unlike Americans, are highly protective of family farms, and the country accounts for 17% of European agricultural output. Being a little less beholden to Agribusiness Cartels and Media pressure, French Interior Minister Gerald Darmanin stated flatly that these wildfires appear to be intentional sabotage.

“There were eight fires, between 8 and 9 this morning, that started a few hundred meters apart, which is quite unusual,” the Minister said, which is Common Sense and not political propaganda. When one thinks about it, and ignores these 'educated' schmucks in our Media, we might see suspicious patterns too.

Why would financial interests who have billions in agricultural futures want to create a shortage of food? Just because they did this with gasoline prices in 2008, we shouldn't imagine that they would do that to the food supply today. Just because NGOs like the Gates Foundation are scooping up distressed agricultural products---broken by the Scamdemic that these same groups created---we certainly can't jump to conclusions that they would have a vested interest in monopolizing the food supply. Especially considering that their stated goal is to do exactly that.

Just because Big Agriculture has been caught numerous times committing egregious acts of environmental pollution, offshoring to countries with near slave-labor conditions, price-gouging consumers and cheating small farmers in America, dumping millions in campaign contributions and lobbying on politicians while committing blatant acts of Regulatory Capture: why would anybody suspect that such stirling characters would stoop to sabotaging food supplies for power and profit?

The World Economic Forum lists among its Top 100 Strategic Partners the following: Nestle, PepsiCo, Coca-Cola, Tyson and Unilever, which are agribusiness cartels operating in America. Financial Octopus Blackrock holds major shares in all of them and the WEF is packed with Blackrock employees. The Bill and Melinda Gates Foundation is listed as the WEF's lone Strategic Foundation Partner---and they now hold the most acreage of American farmland. Kraft and Heinz Foods, along with Dairy Queen restaurants are owned by Gates' foundation partner and fellow-WEF member Warren Buffet. Or, as former Archer-Daniels-Midland CEO Dwayne Andreas once famously said: “The competitor is our friend and the customer is our enemy."

Why would Americans engage in the obviously baseless conspiracy theory that such pillars of humanity as Klaus Schwab, Bill Gates, Warren Buffet, Unilever's Alan Jope, PepsiCo's Ramon Laguarta, and Blackrock's Larry Fink  would ever engage in such despicable conduct to the detriment of society? True, they all do subscribe to an ideology which considers 4/5 of the human race to be little more than parasites; but that's certainly no reason to suspect that they would deliberately drive that population into famine and poverty now is it?

In fact, not all agricultural products are suffering shortages in America. High-potency marijuana, opium products, cocaine, and psychedelic mushrooms are still widely and freely available and somehow don't seem to be suffering from fires and explosions. It does seem a bit strange that we can't get agricultural imports from China because of lockdowns and shipping issues, but Opium from Asia doesn't seem to suffer any impediments. And even though the experts assure us that major accidents in flour mills and poultry farms are fairly common; it does seem rather peculiar that marijuana processing plants don't experience the same problems. One would suppose that stoned workers messing around with volatile oils and plant dryers would be a greater risk for fire and explosion than potato processors regularly inspected by the FDA which have to follow strict safety protocols. It's rather like the problem with our Southern Border: it's amazing how adept ICE is at catching migrant workers but somehow known drug-smugglers and criminals always manage to get through.

So we conclude that the best thing for good Americans to do is smoke plenty of pot, trust the fact-checkers, and apply for Food Stamps. Speaking for myself, though, I'm not such a good American anymore; and for my part, I make friends with a lot of people who grow their own foods and revisit some of my old hunting and fishing spots.