WHY IS CHINA THE ENEMY?

The Supreme Leader of America's Rump Parliament stealthily entered Taiwan yesterday in a continuing saga of the International Bully provoking China. And not surprisingly, the Dragon is on the move: they promised a reaction and right now Taiwan is encircled, it's airspace effectively closed, with embargoes and further economic retaliation about to be imposed on the United States. The Oligarchs, of course, never bear the price of their policies, That's for the American people (whom they consider expendable) and for the Taiwanese (whom they consider even more expendable), while the political class are hailed as courageous heroes by their hired flatterers in Media and Academia.

Like Syria, Afghanistan, and Ukraine---countries 4/5 of Americans can't find on a map---Taiwan is becoming another place where the International Bully has chosen to prove to his domestic followers that he's still the toughest kid on the block. And as they routinely do, the Government-Media Complex is making China the scapegoat in a crisis entirely of the United States' own making.

The average American is even more clueless about Foreign Policy than they are about domestic issues. Vis-a-vis China, they go around spouting whatever the Corporate-funded Media narrative is---which is mostly nothing more than a pack of lies and anti-China propaganda. They talk about China's 'repression' of the Uighurs and the Rohingya tribes without mentioning the little detail that both of these groups are heavily infiltrated with Islamic Extremists and are major centers of the International Opioid Trade. They go around with Free Tibet bumper-stickers and hail the Dalai Lama as some great spiritual leader---completely ignorant of the fact that the Lamas ran one of the most brutal and corrupt regimes in Asia. In fact, the Lamas were ethnically-cleansing Chinese minorities when Mao invaded. People all stood up for the protests in Hong Kong even though under British rule it was a hotbed of Organized Crime; or that most of the protests were made up of foreign provocateurs shipped in by the likes of George Soros. Taiwan isn't much of an exception to these patterns: until recently it was a military dictatorship and since it came into being in 1949 was always more or less a CIA cutout. The current Taiwanese government was practically installed by the Obama Administration. COVID-19 was, of course, all blamed on China despite the mounting evidence that American military labs and Big Pharma were experimenting with just such a virus possibly as early as 2018. 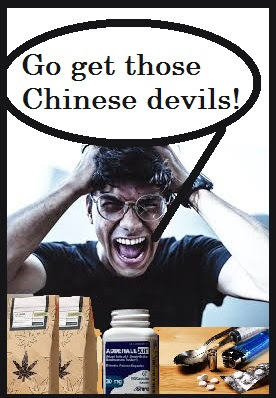 Polls show that 89% of the American population believe that China is an enemy of the United States. I would wager that at least 89% of that figure has no idea why they think so. It's astounding to read comments even on many 'Conservative' websites from people who seriously believe that the Biden/Harris Junta was put into power with Chinese collusion. It's almost as bad as the Whacko Left and their conspiracy theories about Trump being elected with Russian help. Even this blatant provocation by Pelosi hasn't disillusioned these people. The Junta was installed with foreign help---that is true---but it wasn't from China, it was from Davos. And that fact probably accounts for most of the anti-China sentiment in the U.S. on its own.

Granted, the Communist Party of China and Xi Jinping are not a collection of angels themselves; but they certainly have no intention of being bossed around by a bunch of frat-boys on Wall Street living off their great-grandfathers' achievements. In that respect, they at least show more character and dignity than most Americans can muster and they actually do show a little more concern for the Chinese people than American plutocrats and their paid politicians can claim. 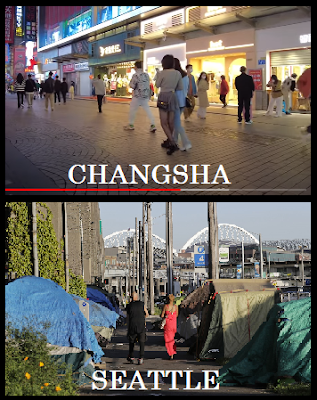 Since Xi Jinping became China's president, he undertook an economic reform program which has found its expression in his New Silk Road Project. This is based on what Xi calls "win-win cooperation" which is a departure from the older Maoist and Soviet philosophies of spreading Communism with the sword. Basically what Xi proposed is that other countries have resources which can benefit China and China has reciprocal resources which can be traded for mutual benefit. China takes the position of non-interference in these countries' internal affairs. He belongs to that rather idealistic school Communist thought which holds that these other nations will see the 'truth' of Communism as their living standards improve and will adopt the Chinese Way over time.

Before World War 2, the United States had a similar foreign/economic policy though based in republicanism and free enterprise. Since the war, however, we've largely degenerated into a society more reflective of the monarchies and dictatorships which we once opposed. We've adopted an internal culture based largely on selfishness, narcissism, and a perverted form of so-called 'rugged individualism' which glorifies success and power at all costs. We've developed a 'win-lose' attitude by which someone else's gain equals a loss for us. Envy and Virtue-Signalling are two of the obvious manifestations of this philosophy and in foreign policy imposing our 'Exceptionalism' on other nations is the mainspring of all of our international relations. Diplomacy, to Americans, means whatever is in America's interest regardless of whether the other countries involved benefit or not. Sadly, this is a reflection of what our culture has become because our interpersonal relationships today is really our international ones in a microcosm.

If we returned to our previous national character, the only competition between us and the Chinese would be ideological, i.e. Communism vs. republicanism. Both of our countries have problems that the other could help solve if we took an attitude of cooperation instead of domination. Unfortunately, this isn't likely to happen since America's overlords in Media and Academia have conditioned the public to see cooperation and mutual respect as a sign of weakness. When Obama tried his 'Pivot to Asia' it ended in disaster and America learned nothing from the humiliating experience. We learned nothing from Syria, Afghanistan, or Ukraine either and likely won't. After all, we've got the Johnny Depp/Amber Heard trial and the latest strain of recreational marijuana to think about. 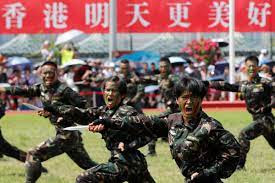