Sadly, in the wake of yesterday's massacre in New Zealand, the voices of Reason and Humanitarianism are being drown out. Even worse, the government of New Zealand is leading the charge in global mass hysteria. They're behaving as though this were 1939 again when Japanese forces were threatening to land on the islands. Not only have they engaged in an unprecedented campaign of domestic censorship, they've trying to suppress information worldwide.  In contrast to this, consider that Iran---which has a highly regulated media---broadcast live footage of the recent terror attacks. When the Iranian attacks were over, the Ayatollah made a speech assuring everybody that the IRGC had done its job and life was back to normal. Not so New Zealand. They're already enacting restrictive gun laws unilaterally with no public input or democratic debate whatsoever.

The skunks in the US Media are behaving disgracefully as well. Instead of making themselves useful and informing people how to help the victims; or highlighting the heroism of many during the crisis: they've been busily blaming President Trump and pontificating that we should outdo New Zealand in over-reaction. 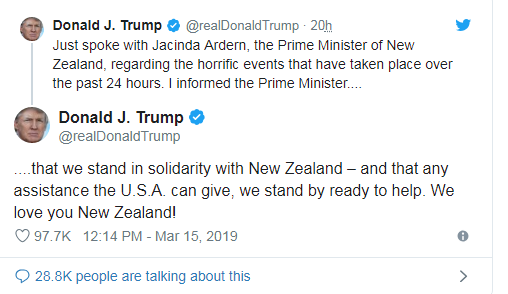 And to her credit, NZ Prime Minister Ardern praised President Trump and thanked him for his support in public, though you won't hear about that in the MSM.

Now the Red Pill Cultists---the actual instigators of these kinds of crimes---did what they typically do after someone they've egged on to violent acts actually makes global headlines. They try to distance themselves as far as possible from their dupes and come up with any excuse possible to shift blame. The mantra they're all following this time is that the shooting was a false flag. Now common sense alone should tell most of us that the NZ Government staging a terrorist incident then censoring details about it isn't even a reasonable theory; but the Red Pills believe in a lot of illogical things.

Roosh Valizadeh, one of the ringleaders of the cult opined on Twitter---with no evidence whatsoever that:

Except that there were two mosques attacked; one in Christchurch, the other in Linwood. What's the significance of the second name?

Vox Day also rose to the fore. He claimed out of one side of his mouth that the shooting was a false flag and then expressed sympathy for the crime out of the other:

Vox is certainly an expert when it comes to things like trolling, sockpuppeting, and disseminating fake news: he's speaking from some considerable experience here. Admittedly, a lot of the shooter's Manifesto was simply Alt-RINO talking points cobbled together. But the other actions of the shooter: like livestreaming the attack; the strange graffiti on his weapons; the music playing in the background---all of these things seem psychologically consistent with the surreal fog of a mind that would produce such a writing.

Vox is also right about our media's indifference to massacres of Christians, but both he and Roosh are mistaken completely about Islamic invasions of Western countries. In both the US and NZ, Moslems make up only about 1% of the total population; and in America 1/4 of these are native-born converts. The US has more Jews than Moslems, and NZ has more Buddhists than Moslems. In any event, Western countries are inviting and resettling the foreign-born people: how is that an invasion?

These false-flag theories are about as believable as the 'it's all Trump's fault' theories. Both are evasions of the truth: the Whacko Left won't admit that our society is alienating and failing men on a large scale and the Far Right won't admit that they're exploiting these broken men for personal power and profit. It's up to us to expose them and to find viable solutions over their hysterical shrieking.
Posted by The Night Wind at 9:39 PM