A project funded in part by the intrepid Robert F. Kennedy Jr. to assess the quality of the garbage fed American schoolchildren USDA School Lunch Program published its results this weekend. I think that most of us realize that foods served in public schools is substandard is no surprise (well, except to Conservative and Churchian parents who were doubtless as unaware of school lunch quality as they claim to have been about CRT, and Drag Queen Story Hours).

The project's actual findings however were probably worse than most of us suspected.

"Of the 43 school items tested, 95.3%, had detectable levels of glyphosate weed killer, the most widely used herbicide in the world, a known carcinogen."

"29 different types of pesticides were present in 74% of the school lunches."

"Thiabendazole, an immune suppressant, was found in 27.9% of the samples."

"Piperonal Butoxide, a developmental toxin that causes birth defects and neurodevelopment disruptions, was in 41% of the samples."

"4 veterinary drugs and hormones were found in 9 school lunch samples at levels up to 130.76 ng/g."

"100% of the school lunch samples contained heavy metals at levels up to 6,293 X higher than the EPA’s maximum levels allowed in drinking water."

"The majority of the samples was abysmally low in nutrients."

One is tempted to say that is inexcusable, but that phrase has become more or less the definition of American Public Schools in general. Our schools are rat's-nests of corruption, abject failures in their alleged purposes of educating anybody; bullying, violence, and child-abuse are routinely perpetrated by students and school employees alike, drugs are dished out like candy; perverted social workers and thuggish administrators and faculty rule with an iron fist---in short, they are more like prisons than anything else---and apparently the food is just as bad. That shouldn't be surprising since the Corporate monopolies who provide school lunches also cater to the Prison-Industrial Complex. 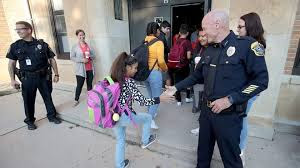 American parents of today, of course, could care less about any of this. However, this wasn't always the case. When President Truman signed the National School Lunch Act into law in 1946, Corporate profiteers and shady NGOs were actually prohibited from pushing their tentacles into the program. Food was purchased by brokers from the US Department of Agriculture. The restrictions were loosened somewhat in the 1970s and 1980s, but even by the end of the Reagan Administration, only 4% of school districts outsourced to private contractors.

Then came the 'deregulation' craze of the 1990s. Clinton/Gore Neoliberalism pushed the 'Private-Public Partnership' philosophy to the hilt---fully aided and abetted by RINOs in control of Congress. Alongside of that came Hillary Clinton's It Takes a Village philosophy of abdicating parental responsibilities---fully aided and abetted by American parents. Since that time, American parents have looked upon the public schools as a subsidized babysitting service. The only debate has been whether or not schools would be run under the privatized Socialist model or the State Socialist model. The recent fusion of 'woke' Corporatism and the Bureaucratic State has resolved that debate for all intents and purposes.

Regulatory Capture of the USDA was observed as early as 1997 and since then the School Lunch Program has been wholly under the thumb of Big Agricultural interests. People, for example, like those running the Gates Foundation which is swallowing up American farmland and promoting global depopulation are major donors to USDA programs. Tom Vilsack, the Junta's current Minister of Agriculture, served under Obama and worked as a Big Ag lobbyist during the Trump years. In fact, Vilsack's top political donors are notoriously short of farmers, but dominated by PACs, lobbyists, and real-estate moguls like Warren Buffett, a WEF linchpin and co-chair of the aforementioned Gates Foundation. 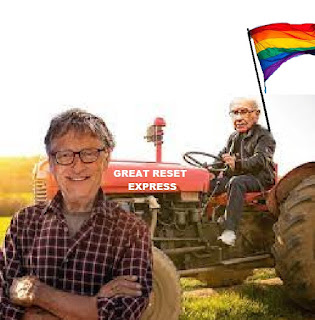 During Obama's term, Vilsack famously championed the use of beef by-products in public schools. Organic Insider notes that Vilsack's other noteworthy policies were: 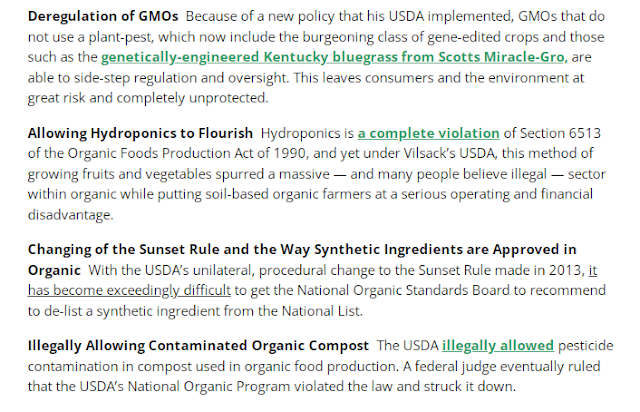 Vilsack's nomination by the Junta, incidentally, was supported by 44 Republican Senators.

Today, American school lunch programs are dominated by three supranational Corporate cartels: the Compass Group, Aramark, and Sodexo---two of which are foreign-owned, and all three of which have very dubious reputations. In fact, their catalog of crimes is so blatant that even Wikipedia called them out here, here, and here. The Compass CEO responsible for most of the company's illegal activities died under suspicious circumstances in 2017, but even that hasn't affected their status as an industry leader. Aramark's CEO John Zillmer is on the Board of Directors of the Gates Foundation-funded Ecolab, which in turn is also a major Government contractor.

All three of these contractors are also heavily tied to US Agribusiness interests, specifically Kraft Foods and Tyson Foods, the latter of which has managed to rack up an ever greater track-record of Corporate malfeasance than the three previously mentioned combined. Tyson is a member of the World Economic Forum, and closely connected politically with the Clinton Family. (One of Tyson's top lobbyists in DC is former Senator Mark Pryor of Arkansas). The Junta's Ambassador to the WEF, John Kerry, and WEF Oligarch Warren Buffett are major stakeholders in Kraft Foods. Republican Senators John Hoeven and Roy Blunt own about a quarter-million dollars in Kraft stock.

According to the USDA's own numbers, the food served in 87% of public, non-charter schools in 2014-15 offered branded foods for à la carte purchase during meal times, and vending machines were available in 30% of all schools (including 71% of high schools). It's hardly any accident that childhood obesity rates have skyrocketed since the phony 'deregulation' of the 90s as fast as toxicity levels in school lunches have.

As might be expected, the quality of food purchased by contractors is not an especially high priority. In fact, their general practice is to purchase unsalable processed foods which barely meet standards for consumption at pennies on the dollar, and then palm them off on public schools for a fat government subsidy. They will never be held to account for these practices either. Besides their control of the USDA, the 'Big Three' have a sizable battery of Beltway lobbyists---the overwhelming majority of whom are revolving-door former federal officials.

Ultimately, though, the responsibility falls upon American parents who have looked the other way and allowed this situation to happen. They can plead ignorance all they want to, but increasing obesity rates and sicknesses---not to mention that their kids probably complained about the food more than once---hardly could have escaped their notice. If they'd paid as much attention to their children's diets as they have checking their stock-returns and the newest strains of recreational drugs, maybe this wouldn't have happened. I feel sad for the children and teens caught in these public-school hells, but for their parents, I feel no sympathy whatsoever.

Our public schools are a disaster, and it is another disaster of the American people's own making. It's become impossible anymore to listen to pundits on the Right spouting off about parenting as though their own hypocrisy and duplicity had nothing to do with our failed schools and broken homes. One recalls, during the Scamdemic, it was the Conservatives---not the Liberal Left---who were demanding the loudest to reopen these failed institutions. Recall also at that time, schools were demanding mandatory masking and Loyalty Vaxxes.

In fact, 2022 election polls show that family and education are not even on Conservative voters' list of priorities. As for the Democrats, the 'right' to kill unborn babies is their top concern. Saving the same lives is a distant third priority among the so-called Right: behind making more money and scapegoating immigrants. Tell us all again that we're the Party of Principle standing for faith, family, and freedom. Even if we could imagine a fair election at this point I don't believe that the Right deserves to win. Those who disregard the welfare of their own families can't be trusted with the welfare of a nation.