ON PERISCOPES OR SOMETHING

Blogger InsanityBytes had a fun post up today about some of the further misadventures of Red Pill orbiter Doug Wilson. I'm not going to go too deeply into Wilson's strange theologies, but his use of the term perpilocutionist caught my attention. If you've studied Latin, you can have hours of entertainment trying to decipher its meaning. More likely, Wilson's readers will just take it for granted that Wilson understands it and therefore must be smarter than them and therefore what he says about it must be true---whether one understands what he's saying or not.

This is another example of a trend that I noticed appearing a little over a decade ago. First it started among Libertarian blogs and articles and then among the Red Pill Cult; and now it's starting to see some prevalence among mainstream Conservative and Churchian sites. The trend is to employ these big, obscure words that no one uses or understands to gain credibility. We used to have a big, though more common word for that too: pretentious.

It's bad enough that the Left does this; although their method is to make simpler sounding words (or neologisms, if you prefer). Terms like homophobia, sexism, gender essentialism, denialism---none of these expressions mean anything, but they are thrown around authoritatively as if they were real concepts. Most NPCs on the Left couldn't explain any of them if asked to do so; but they will assure us that smart people have a consensus that they are very bad things.

All of this reminds me of a story from the Old Country that aged relatives passed on to me. A corrupt priest who'd been run out of Central America came back to the Parish with some quetzal feathers that he'd obtained. He convinced the poor dupes in the rural European towns---where most people were still serfs who'd never travelled further than 10 miles from home in their lives and could barely sign their own names---that these were feathers from the Angel Gabriel. They would pay him to touch the holy relics while he recited some arcane terms in Latin (which turned out to be lines from the Roman comedian Plautus; this guy truly had no shame). This happened around the time of the French Revolution and a visiting scholar exposed the fraud. The only feathers the priest ended up with were attached to him with a good coat of tar.

The moral of this story is that during the larger social upheaval in France afterwards, memories of things like that didn't exactly win the Church very many supporters. It's bound to backfire on the postmodern political/social Right too. We expect the Left to use dirty tricks with the language, bend laws, ignore principles to get what they want. The tactics, however, are not consistent with public perceptions of what a Conservative should be doing. It makes the leadership look like complete hypocrites and their supporters look like a bunch of ignorant peasants and plays into all the negative Leftist narratives and stereotypes. We forget sometimes that Leftist philosophy is heavily based in Cynicism, and when those on the Right adopt the means of the Left that tends to reinforce the already-low opinion most Liberals entertain about human nature.

Overall, I believe that there are three reasons why we're seeing these kinds of trends on the Right:

1. Many on the Right have internalized the values of the Left. This is very apparent with the Manosphere Red Pills who've essentially absorbed Radical Feminism and re-packaged it. We're starting to see this ugly trend manifested in 'Conservative' social policy like embracing Cancel Culture, Lawfare, and imposing their own versions of the Left's authoritarianism.

2. Many on the Right believe that Conservatism has failed. While Conservatism preaches life, liberty, and the pursuit of happiness based on the universal equality of man; this idea has been drifting steadily into the Alpha superman ideal where Might Makes Right and into a crude version of Social Darwinism where ruthless competition and the 'survival of the fittest' are justifications for the strong to lord over the weak, This is a concept also imported from the Red Pill Cult. The only real criticism that most of this philosophy has with the Left is that they consider the Liberals to be too weak, too concerned with compassion and even 'social justice' which they've turned into a pejorative term.

3. Many on the Right actually do have contempt for the Common Man. The Neocons and Bush-Republicans stand out here; but the so-called Alt-Right is also quite open about displaying it. They talk about controlling the narrative regardless of any truth involved in it. Like the Left does, their whole intent is to deceive, because at heart they don't believe the average man intelligent enough to decide what is for his own good.

All of this is bad enough, but the Red Pill goal is to change ordinary men into manly Alpha leaders who dominate their inferiors: their families, co-workers, etc. The Alpha is a blend of faux Stoicism, unbridled selfishness, and a tendency to see others as subhumans. Needless to say, such an outlook doesn't promote things like love for one's neighbor or empathy---which the Alpha considers weak and effeminate values. Once a man becomes an Alpha, he really has nothing more to do than reign as supreme lord over those in his own ego-field and contemplate his superiority over the average human.

Naturally, the only person capable of actually governing a nation of Alphas is an Uber-Alpha (or Sigma, as Vox Day calls this type). This is somebody strong and ruthless enough that other Alphas automatically submit to his authority and well, I think that we can all see where this sort of thinking leads. 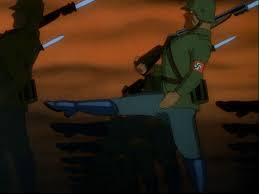 This is the point where abusing terminology actually becomes dangerous. We've already seen it with the Left. People lose their jobs or get censored and blacklisted for phantom concepts like 'homophobia.' A protest can turned into an 'insurrection' and subject one to sham trials in kangaroo courts. Do we really want to see this on the Right?
Already, illegal immigration on the US-Mexican Border---which has been a problem for over a century---has suddenly become an invasion. Social welfare programs---including things like drug treatment--- have become communist. Sensible sexual education of minors has become paedophilia. There is actual discussion on 'Conservative' forums about imposing future loyalty tests in places like public schools. If we go to these kinds of extremes, we become what the Left is. The only difference is that the jackboot is on the other foot.
Through all the big words and the tough talk, there is a decided lack of any constructive solutions coming out of the Right. It's nothing but talk of revenge, punishment, and projecting power. This isn't Conservatism, whatever else it may be.
Conservatism is premised on the belief of a Government that is a servant---not the master---of a nation. In Conservatism, the function of a Government is to maintain freedom by protecting life, liberty, and property. There is no place in Conservativism for revolutionary ideologies which hold to any notion of a Master Race, whether that be self-appointed Alphas or self-appointed Elites with delusions of a Great Reset. Whether the postmodern Right wants to accept it or not, Conservatism is based on equality. The Law under Conservatism is to intervene in defense of the collective Rights of life, liberty, and property. "Beating the Left at their own Game" is still a surrender to the Left, no matter how it's spun.