Well, two days before the holiday when our attention is focused on the ladies; we celebrate the birthday of one of America's greatest men. Abraham Lincoln, our 16th President, was born February 12th, 1809. His birthday is still a legal holiday in seven US states.

In our cynical, postmodern culture it has become fashionable in certain circles to bash Lincoln and his reputation. A mediocrity cannot stand greatness and heroism---which spirit has much to do with how Lincoln died. But in earlier generations, Lincoln's Birthday was informally observed by those who understood him and what he came to represent. 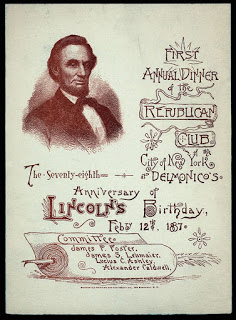 A pharmacist in Buffalo, New York named Julius Francis led a grass-roots initiative to establish February 12th as a national holiday. Though Francis never succeeded in this aim, Lincoln's Birthday was celebrated across the country with parades, school pageants and re-enactments. There were also special dinners featuring some of the President's well-known favorites. (His wife Mary was said to be a fabulous cook). According to Food & Wine, a Lincolnesque dinner consisted of Chicken Fricassee, Cornbread, and Apple Cider with Almond Cake for dessert. Those interested in these uniquely American delicacies can find the recipes here.

Lincoln was admired for his achievements, but most of all his determination in achieving them. He was born into poverty and worked at manual labor early in his life. He also served in an Illinois Militia during the Black Hawk War. Lincoln understood that his lack of education was an impediment to achieving better things. He taught himself to read while a teenager. Later he became fascinated with the law and saved his wages to purchase a set of law books. He studied the Law and passed the Illinois Bar Exam. Thus qualified, he set up as a lawyer.

His law practice did not fare well, but Lincoln was undaunted. He became active in the community and was persuaded to join the Whig Party. That party collapsed shortly thereafter and Lincoln joined the newly-formed Republican Party. In 1856, he campaigned for the GOP's first nominee: General John Fremont. The two later had a falling-out over the conduct of the Civil War; but were later reconciled. Lincoln always had a way of winning people to his side. Another of his political opponents in the North, General McClellan, had a similar relationship.

Lincoln won the GOP nomination in 1860, and won the presidency with a plurality. He then was faced with the greatest threat the United States ever faced to its existence before or since. That was the Civil War, which consumed practically all of Lincoln's tenure in office.

Lincoln is best remembered today for abolishing slavery in 1863. But his equally great achievement was crushing the well-organized insurrection led by the slave-holding class.

Among the other acts of President Lincoln was opening the Transcontinental Railroad, establishing the USDA, and creating the first national park at Yosemite. Tragically, in the war's immediate aftermath, Lincoln was murdered in cold blood by a failing actor who hated Lincoln and considered himself part of the dispossessed so-called Southern Aristocracy.

Lincoln suffered a great tragedy in that his first love, Ann Rutledge, died at age 22. He believed at the time that he would never love again, but eventually married Mary Todd after a sometimes rocky courtship. Contrary to what some believe, the Lincolns were happily married and had four children. 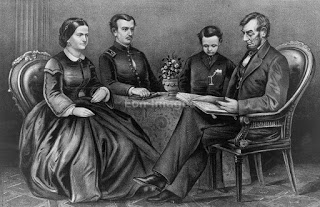 The thing that has always made Lincoln so popular is that, at his core, he was really like all other men. He had his faults, he had his successes, but he was a man to whom other men could relate and also held the respect that made him a leader. He really was in many ways considered the archetype of American manhood. An ordinary man who met obstacles and overcame them.

So before Valentine's Day, treat yourself to at least a tall glass of apple cider and drink a toast to one of our true national icons.