Following our last post raising further questions about the financial dealings within Vox Day's media ventures, Mr. Markku Koponen (the owner of the company to which Castalia House is a subsidiary) was kind enough to leave some commentary. While Koponen explained that business kept him busy, he was heart-touched by the concerns which we'd raised. And he implied that he might address them at some point in the future.

However, Koponen did address one valid point:

Markku KoponenFebruary 5, 2019 at 2:22 PM
Except that I'm churning out copy several times a month. Because you can't find me, to waste my time. You may note that Vox has always said he's the "lead editor of Castalia House". He has never claimed to own any part of it, because he doesn't.

He's correct in that Vox has never claimed to own Castalia House, and this is confirmed by Finnish tax records. Vox is the 'lead editor' there; just as his Linkedin profile shows that he is the lead designer at Alpenwolf, Castalia's parent company. But what's interesting to note, Alpenwolf hasn't produced any gaming systems in some time---a few years, in fact. As Koponen says, he's "churning out copy several times a month." But this brings up a question: Why does Alpenwolf's entry in the Finnish Business Tax Registry claim that Computer Programming Activities are its main line of business, when publishing clearly is that?

We see from the most current available website valuations that Alpenwolf's programming activities aren't exactly stellar:

Now this is an interesting graphic, because it gives us our first tangible look at what Castalia House's actual sales figures are. Vox has been encouraging more online buying lately since his retail sales have been sluggish, to say the least. The above graphic shows that Castalia is averaging about $64 per day in online sales. That isn't too bad; but hardly makes them industry leaders. Compare that number with the online sales of companies that Vox hopes to 'dethrone;' e.g. Tor Books ($570 per day), DC Comics ($789 per day), or Marvel Comics ($1,548 per day).

So, at least a big percentage of Castalia's sales add up to around $23,300 annually. That's about 20, 500 Euros at current exchange rates.

But astute readers who've been following so far might ask: 'Wait a minute...didn't you say earlier that Finland exempts companies from European Union VAT requirements only if they had less than 10,000 Euros in annual business revenue? Is Alpenwolf/Castalia House in compliance with this regulation?' Well, apparently not. 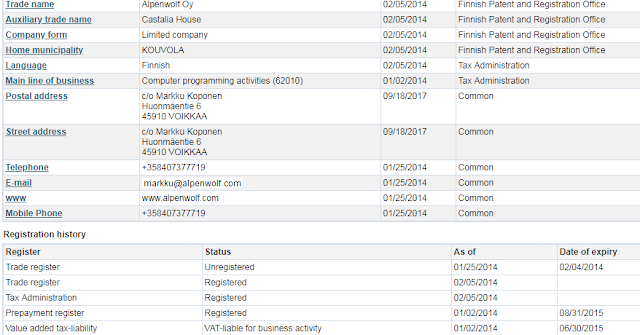 As seen on the last line, Alpenwolf's VAT registration hasn't been renewed since 2015. One has to wonder if this potential liability wasn't one of the reasons for Vox' suspension from Indiegogo. A subsidiary business entity which can't demonstrate tax compliance operating under another company---which exists only on paper and has no verifiable business address---looks like a bad risk from just about any angle.

So hopefully Markku Koponen will also look into this matter when he writes us again. 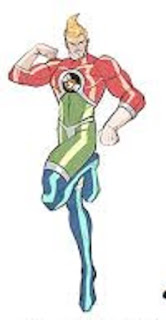