With Elections supposedly coming up in November, the Controlled Opposition Republican Party is trying desperately to prove itself somehow distinct from the Ruling Junta Democratic Party. To the Corporations who actually rule the United States, this is all just a social experiment; changing parties to them is not much different than changing management. It's really to Wall Street and not to the people that both parties are marketing their message proposing a platform; the GOP is apparently to position themselves as more overtly ruthless and willing to execute the New World Order than the Democrats are. Those of us who remember the 2000 Elections probably all see that it's the same script being played. Hopefully, we all remember how well that worked out.

Neoconservatism has never been friendly to Christian or traditionally Conservative values, though for obvious reasons Neocons have to pander to the so-called 'Religious Right' and have largely redefined what 'Christian Values' mean. The movement began in the 1960s, by former Marxist academics and pundits---mostly Jews and Atheists---who split with the Left largely because of Neocon opposition to Lyndon Johnson's Great Society and Civil Rights programs; as well as their belief that LBJ was too soft on Vietnam. If this sounds paradoxical, it must be remembered that the bulk of them came from the Trotskyite branch of Communism, which by the 1960s had the belief that Stalin and Khrushchev destroyed the 'golden ideal' of Communism and that the USSR was hopelessly corrupt.

Against that background, one can see the real context behind the famous quote of Irving Kristol, one of the ringleaders of the Neocon movement: "A neoconservative is a Liberal who has been mugged by reality." It also accounts for the Neocons' fanatical hatred of all things Russian.

Another of Kristol's insights into practical politics illustrates the Neocon's true feelings towards representative self-government:

We'll let the reader decide for himself how compatible with Christ's teachings that statement really is.* (See note at the end of this article.) The idea, however, is not incompatible with the goals and aims of the dandies at the World Economic Forum. An anonymous writer stated the following which points out how phony the Neocon opposition to Left-Wing 'wokeness' really is:

"The idea of forcibly spreading democracy and free markets throughout the world is parallel to the Communist idea of a world revolution.The political philosopher Francis Fukuyama stated that his book, 'The End of History' which was written from a neoconservative perspective, set forth an essentially Marxist vision of social evolution with liberal democracy replacing 'pure communism' as the final state of society. He furthered this parallel by stating that the Bush administration's sort of neoconservatism was a form of Leninism, i.e., a sort in which an elite vanguard tries to push the revolution forward when the proles won't.

"The much more low-brow neoconservative pundit Dennis Prager also authored a book similar to Fukuyama's called 'Still the Best Hope', which set forth a vision of the world in which people worldwide would embrace 'American values' after the liberal media, universities, and politicians could no longer dupe the public into voting left-wing. After this, the world would largely embrace American ultraconservatism, which would result in the fall of Leftism and Islamic Fundamentalism leaving neoconservatism as the most widely embraced ideology in the world for the foreseeable future."

As pointed out in the previous two articles, the free market that the Neocons embrace is really the crony-capitalism of the WEF and similar organizations. Their Elitism, egoism, revolutionary zeal, and contempt for the untermensch largely explains their complete unwillingness to raise the standard of living in the US, while having no qualms about imposing their exceptionalism on other countries whether those countries want it or not. 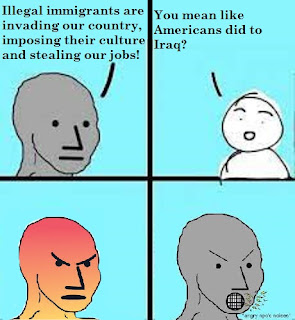 To sell their baloney to the constituency, the Neocons have to do a lot of revisionism to Christian principles to hoodwink Churchians into believing that money and power are Fruits of the Holy Spirit.

"Whether we like it or not, we humans have become this planet's stewards. Our long-term success is not remotely assured but ignoring reality and building fatally flawed systems upon which hundreds of millions rely is certain to lead to our's and possibly our planet's demise. Yet the solution is right before our eyes and is happening every day. There is a symmetry and self-balancing nature driven by modernity. Modernity brings freedom and Rule of Law. Modernity brings the scientific process and widespread knowledge of all aspects of reality. Together these provide the framework for wealth creation. This wealth creation further drives innovation in all areas of life. It creates a virtuous circle where one good thing leads to another and so on.

"One feature of this symmetry is the reduction of the number of people required to generate the same or even more economic output. Almost all predict in just the next few years we will see an explosion of these innovations even further reducing the number of people required to do the same things---hitting low-skilled jobs the hardest. This is in perfect harmony with another feature of modernity: birth rates dropping and populations stabilizing. All of these pieces support the others and they all move more or less in harmony. It is clear that the worldwide answer to the Population Explosion is freedom and modernity and anything which distorts this harmony by definition will be destructive."

This drivel wasn't written by Bill Gates or His Royal Highness King Chuck of England, but it may as well have been. No: it came from the pen of John Conlin, one of the 'rising stars' of the Neocon punditocracy. Conlin runs a nonprofit consulting firm and it's foundational principles state "a search for truth...the truth we will leave to God."  His financial expertise seems to be a fairly sophisticated form of day-trading. Regardless, he seems to be promoting the idea that population control is somehow now a 'Conservative' value.

First of all, the idea of population control is based on the pseudoscience that Earth's resources are limited relative to population increases. That's true if all of the wealth and resources are being hoarded by Oligarchs, but in reality its falsehood is evident by one of Conlin's own assertions: "Modernity brings the scientific process and widespread knowledge of all aspects of reality. Together these provide the framework for wealth creation. This wealth creation further drives innovation in all areas of life. It creates a virtuous circle where one good thing leads to another and so on." In other words---in a genuine free market---science and knowledge expand their technologies to meet growing demand for more resources. His conclusion that this should lead to population decline is specious---in fact, it should logically lead to larger families. Absent abortion-on-demand and political propaganda, it usually does. Note that in Victorian times, the birthrate among the expanding Middle Class went up, it also did in America during the settlement of the West, and today the birth rate is coming back in Russia as economic conditions have begun to improve.

At any rate, the idea of population control is not a spiritual doctrine in any major Western religion that I know of. The Jews teach "Be fruitful and multiply" as one of the first commandments given by God to mankind; the Catholic Church has never sanctioned birth control in any form; the Moslems believe that children are gifts from God (actually Western Christians used to believe that too, but today it's Islam that practices what it preaches).

Frankly, the only difference I can discern between Conlin's proposals and Klaus Schwab's is that Conlin seems to target population control to 'undesirable' (i.e. non-White American) demographics whereas Schwab wants it for the hoi polloi in general. Throughout Conlin's entire thesis there is not a single reference to the ethics of his proposals: his entire argument is based on economic expediency and market calculations (none of which are actually beneficial to the working class or to small businesses, but are hugely beneficial to monopolistic corporations).

Conlin also makes other questionable assertions in addition to his flawed premises. "Rather than importing people, perhaps we should be spreading the message of freedom and modernity and all of the wonders it brings to all parts of the globe. {Query: How?} Individuals in these countries may choose to ignore these wonders; that is their choice.{Our recent interventionist history strongly suggests otherwise.}  But exporting their “surplus” population to the United States is not a solution for either country." This last statement is demonstrably false. In Mexico, for example, it's easier to start a small business than it is most of the US. The problem that most Mexicans face is that it is extremely difficult to raise capital. Many come to the US and work at minimum wage (the Mexican minimum wage is 50 cents an hour) and raise the money needed to begin a new life---not here, but in Mexico. The Mexicans benefit and so do we, as our small businesses often need temporary minimum-wage workers.

But missing from all of this is any concept of humanity as Children of God. The Neocon view shares with the WEF the view of humanity as human capital,**(See second note at the end of article). It's a small move intellectually from that viewpoint the sort which sees political opponents as enemy combatants who ought to be dealt with accordingly.

If there is any truth to either Christian or Conservative principles, then there is no justification for resorting to force and fraud to maintain them. Mimicking the Left's tactics is a confession that their methodology works and ours does not. If we have faith in our principles, then we don't need more than stand firm in them and let the Truth speak for itself.

(Note 1) I can't vouch for the veracity of this anecdote, given its source. It came from David Brock, a former RNC operative who switched sides after Hillary Clinton and George Soros offered him more money and a live-in boyfriend to work for them instead. I tend to believe it's true, however, given Brock's intimacy with the people involved and their known characters.

According to Brock, one of Bush's top cronies and arch-Neocon Karl Rove is actually an Atheist, though Rove went around campaigning at churches and Christian activist groups. Brock said that Rove afterwards would laugh up his sleeve at how stupid he thought Christians were and their gullibility for falling for any of Bush's talking-points which the latter had no intention of honoring.

(Note 2) A specimen of this attitude in practice is the UK-based Serco Corporation, which has in offices signs stating "Just remember, you're not a worker or an employee. You're human capital." Shortly before the Scamdemic, Bill Gates bought a huge chunk of Serco stock and then lobbied to have them manufacture Vaxx-tracing equipment. Serco is a major government contractor supplying the Security and Surveillance State. It's CEO is Christopher Hyman, a member of a Fundamentalist Christian Church who goes about giving testimonial speeches claiming the secret of his success is because he "listens to God."