FROM THE LAND OF FRUITS AND NUTS...

So this week, a video surfaced and went viral in some Conservative circles. It features a fellow named Carlos Zapata of Shasta County, California who apparently owns a business there; and his denunciation of the local tyrants and policies made national news. Now, the bureaucracy in Shasta County is a typical collection of insignificant time-servers such as used to occupy offices behind the Iron Curtain for decades. They don't know anything about taking initiative and are at a complete loss in a crisis without a higher-level Party Commissar telling them what to do. In spite of Zapata's speech---and he was joined by dozens of other infuriated citizens in protest---the best that their Health Services' Director could muster in response was to say: "Our local health officer has not made any restrictions over and above what the state of California has, so we are doing all that we can to keep the county as open as possible...We are one of roughly 20 counties that still are not on the (state) monitoring list...so Shasta County is open; it is, again, in the category of most open counties in California."

In other words, Shasta County is deferring any action pending the decision of the nutcases in Sacramento. Governor Newsom doesn't care anything about Shasta County---or anybody else in the State, for that matter. He appears to be a genuine mental case who's neurotically stimulated by inciting fear and chaos in others and is unlikely to reverse his course now that he's tasted human suffering. 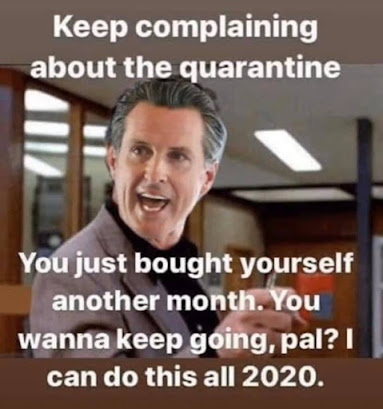 While this is typical Liberal behavior, it speaks volumes that Conservatives have to go all the way down to a Board meeting of some tiny California County to find a voice that even remotely speaks for them. That is really a shame.

As for Zapata's speech, it really fell into two parts. In first, he didn't really say much more than we or other pundits say---but it needed to be said. In the second part of his speech, Zapata alluded to potentially violent action that might arise out of public frustration. The Mainstream Media slime all pounced on that part of the address to portray Conservatives as violent crackpots. This in spite of the fact that the MSM has been egging on the violent thugs in Antifa and BLM for the past three months.

What's concerning to me is Zapata's statements about a mass rising-up of long-suffering American males. That's not because I'm afraid they'll do it, but because I know good and well that they won't---and all of these kinds of threats are just hollow boasting.

Zapata told the Board that, "Right now we're being peaceful, and you better be happy we're good citizens, that we're peaceful citizens, but it's not gonna be peaceful much longer. And this isn’t a threat — I’m not a criminal, I've never been a criminal but I’m telling you real good citizens are going to turn into real concerned and revolutionary citizens real soon...And nobody else is gonna say that. I’m probably the only person that has the balls to say what I’m saying right now!

"We’re building and we're organizing and we’ll work with law enforcement or without law enforcement, but you won’t stop us when the time comes because our families are starving! And if it has to be war against our own citizens, it will happen, and there's a million people like me, and you won't stop us!"

Now to be clear, nobody's laughing at the plight of the oppressed citizens of Occupied Shasta County. But this notion that millions of American men are going to rise up against the Elite is something I've been hearing for the last 30 or so years. I'll believe it when I see it---heck, I'll even join in. But I've never seen the emasculated modern American male do much of anything other than what he's told. Where I live, 90% of them can't even muster the courage to enter a store without a mask, for Heaven's sake. That's even after the local police have said that they won't enforce the Mask Order.

Zapata says that six of his acquaintances have been driven to suicide by Newsom's regulations. In six months, he himself has been labelled a nonessential; had his business illegally closed; been called an White Oppressor who deserves to suffer anyway; had the government allow 'reopenings' with numerous conditions; saw people all across Shasta County reduced to poverty; but---you Elites better watch out, or we're going to get really mad! Is it any wonder that nobody takes this kind of babble seriously? 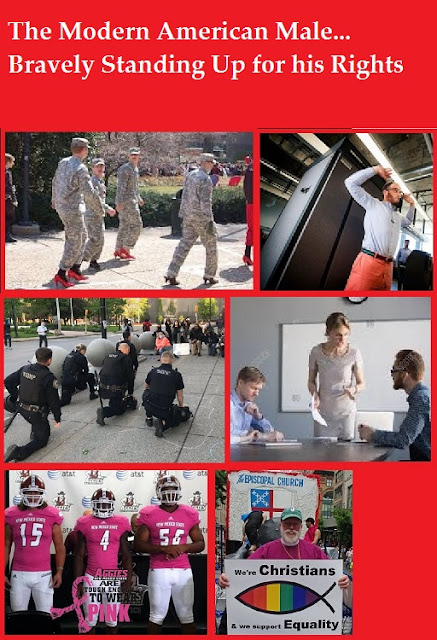 What we need to stop the Coup is not this kind of showboating. What we need urgently is pressure being put on the Republican Leadership to assert themselves and start taking charge. Many State Legislatures have the power to convene Emergency or Special Sessions and legally depose the dictatorships running their states. US Senators and Congressmen both can put pressure on their home States and start supporting President Trump against the RINO Fifth Columnists. Activists can begin recall petitions, and initiate cases in State and Federal Courts. Sheriffs, police, and even National Guard can refuse to carry out the enforcement of Criminal Orders. Many of us can fight back by disseminating counter-propaganda, or we can refuse to obey their illegal edicts, or we can even sabotage their activities with forms of passive resistance.

Right now, American patriots have a huge vacuum of leadership; the President himself is surrounded by the Enemy is own camp. We need to buy our leaders time---time to form trustworthy alliances and formulate a counter-attack. Civilian violence---or even the threat of it---right now would be a disastrous move for our cause. We can still win, but it will take patience and---above all, courage. Resistance is paramount now and the sheep are being separated from the goats. 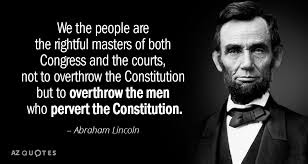