Yesterday, the 22nd of February, was the former Federal holiday celebrating the birth of George Washington, who was also formerly known as the Father of his Country. During my school years, this was a day off from regular school; we had presentations and usually the high school had a stage play depicting some incident from Washington's life. I remember we had a traditional American/Colonial food for lunch that day and each got a cherry pie to take home. 😍 Today, in our more enlightened age, Washington is rarely mentioned in schools, except in passing as just another Dead White Male; and Drag Queen Story Hours are considered far more healthy and inspiring than celebrating anything our Founding Fathers might have accomplished.

Washington was born on a Virginia Plantation which, like most others of the time, kept chattel-slaves. To the Whacko Left Wing, that negates every positive thing Washington ever did---like winning the War of Independence and unifying the country by supporting the U.S. Constitution; or having a character which made him a role model for American men for nearly two centuries. After a Summer where monuments to Washington were made a special target of Leftist vandalism, the Junta's figurehead had nothing to say in honor of Washington's legacy yesterday and instead focused on fanning Scam-demic hysteria. 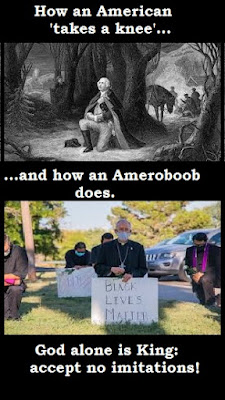 George Washington was probably at the top of our national heroes, and the whole concept of heroism is anathema to the Left. They can't stand great men and women. To a normal, healthy mind greatness and excellence are qualities to be admired. Many even try to emulate qualities in those they admire. Religion goes a step further and teaches that we should emulate the character of God to the best of our abilities. It's no accident that most of our greatest leaders were also men and women of faith.

However, to diseased minds like most on the Left have, a heroic figure is an object of envy. The greatness and popularity of others makes them feel their own inferiority more keenly. But instead of improving themselves, they work like social termites to tear down, find fault, criticize, and belittle those they wish to cut down to size. In reality, the true object of their hatred is the evil within themselves; so the more they attack just and innocent persons the more their self-hatred grows, and the more obsessive they become; all the way down to the point where we are today and Liberals are trying to efface all traces of greatness from our society. Envy leads inevitably to this kind of psychological death-spiral; and most Liberal 'activists' have become neurotic to the degree that they can never escape this cycle of hatred and destroy innocent people by compulsive impulses instead of for actual reasons. The Church understood this before Science did; and listed Envy as one of the Seven Deadly Sins. Envy, left unchecked, has the same corrosive effect on the soul as upon the mind.

In its most morbid state, this unslaked Envy takes on a spiritual aspect. A person can actually degenerate to the point where he challenges the Goodness of God. In Christian tradition, this was the Original Sin of Lucifer and those under this delusion of their own greatness begin emulating the qualities of the Devil. They start to believe that they have Godlike powers---minus the Godlike qualities of love, mercy, and compassion for the individual. We see this type of mental/spiritual psychosis running rampant among both the leaders of the Junta and among the Great Reset and New World Order kooks. If their policies seem insane to normal persons, it's because they in fact, are.

Consciously or otherwise, these oligarchs and their political satraps are only superficially working for worldly power and material gain. What they are actually doing is fighting God for control of the Earth and its inhabitants. This is an important distinction that Conservatives---and people of faith in general---must keep in mind. The Elites respect neither God nor Reason and are going to wage this battle accordingly.

By the same token, as gloomy as the sociopolitical situation looks in 2021, the Elites are doomed to fail. They're not going to defeat God---nobody ever has---and to be honest, I think that many of us will see their downfall within our lifetimes. 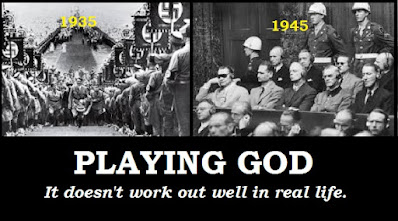 That doesn't mean that we should become complacent and 'let God handle it.' That kind of turning a blind eye to Evil is largely responsible for enabling the Junta to come to power. Old George Washington was fond of repeating the proverb from Poor Richard's Almanac that 'God helps those who help themselves.' The wise course of action for people of faith now is not only to pray, but to pray for guidance on what to do. If we keep sitting on our hands and 'going with the flow' as we have done; the New Order will still fall, but with a devastating crash. Better that friends of freedom still in government start standing up, saying no to the Regime and taking legitimate power back before it becomes too late.

There are plenty of able men willing to take back the State and restore Constitutional Law, such as happened in North Dakota today. We still have leaders like George Washington among us; but they can't act alone. What we can do is give them our support and encouragement. The American people have been called the last line in the defense of liberty; but the last year has shown that we're mostly a Paper Tiger. If we want real leaders again, we'll have to be worthy to follow them.