THE ROLLING BLACKOUT OF COMMON SENSE

As we've probably all heard by now, a record cold-front has been sweeping the Central United States, and---if we believe the Corporate Media---Texas has been especially hard-hit. Power outages, water and food shortages, etc. The Global Elites who've assumed control of the United States, meanwhile, are jetting off in their private planes to Climate Change Conferences (i.e. cutting business deals and making plans for how to pounce on the ruins). Instead of sending any of the loot they've made off of the Scam-demic to help their struggling fellow-citizens, they've instead sent their toadies in the MSM to fan even more apocalyptic hysteria.

Unlike the Trump Administration's responses to natural disasters, the Junta doesn't seem overly eager to rush in and make federal resources available either. Never let a good crisis go to waste; is the motto of such people, and a good deal of suffering might make their 'Green New Deal' more acceptable to the scientifically illiterate Ameroboob.

This disaster was wholly predictable. American Energy systems have been in a state of collapse for a long time; as has our infrastructure in general. In fact, back in the early days of this blog, we did a whole series on infrastructure failures. Some experts, mostly civil engineers, were warning then that we were in for some serious problems if we didn't start addressing these issues. President Trump led the first administration since Reagan to begin a real infrastructure policy. But most of his plans were blocked by the Radical Left and their RINO Confederates in Congress; and it was all Orange Man Bad for four years---now Americans are freezing instead of having cheap and reliable energy again.

With the limited powers he had, Trump did make some significant improvements, even setting us on track to energy independence again. The Junta as reversed or suspended nearly all of these in less than one month. Oh well. I guess that Americans can stay warm by building indoor igloos with all the toilet paper and face-masks they've been hoarding for the last year.
Meanwhile, from their well-heated studios, the millionaires who pose as newscasters are criticizing Senator Ted Cruz for leaving the country for a tropical vacation during the 'crisis.' My only criticism of Cruz at this point is that he actually apologized for doing it. 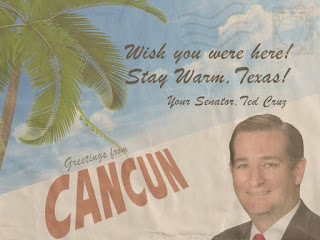 I wish that Cruz had flatly said, "Look you idiots: we tried to prevent this from happening. We got censured and impeached for our trouble. Now you think I should freeze my butt off for you besides? Look: if you have some batteries, turn on your radio and listen to Biden's next speech about 'sustainability' on NPR. That's what you wanted, so stop complaining. Now, I'm off to grab a couple of Margaritas and head down to the beach."

All fun and frolic aside, the one thing that we can predict with certainty is that these kinds of situations will increase in the future---and on wider and wider levels. It's not because of 'man-made global warming' or any other such schmaltz. It's because our power grids, water supply systems, dams and levees, gas and sewer lines, etc., are long past their expiration dates and no longer equipped to handle even routine natural occurrences. That's why fires, floods, violent storms, and other weather phenomena having been wreaking such devastation across the country for the last 30 or so years. It's not that weather has gotten worse; it's that our will to prepare for emergencies has gotten worse. Ameroboobs with their culture of passive living, contempt for learning, and grabbing the fast buck at the neighbors' expense doesn't fit well in a world which still operates according to the Law of Nature. And all of this malarkey about carbon footprints isn't going to change that fact.

The reason that Civilization has made such strides is because Man learned to understand how Nature works and how to harness that power. A tribe of savages sees a storm approaching and sends the witch-doctor out to do spells to appease the wrath of the storm-god. A civilized man comes along, builds a dam, and the tribe no longer fears floods and further learns that water's power can be used to their benefit in other ways. But the Left has come along since and told us that Civilization is the product of dead White males; that witch-doctors are the real scientists; and that Life is really better when it doesn't involve thinking or working. Cold fronts like the one in Texas happen because the Earth is mad at us; and building energy grids that actually work will only make the Earth madder, according to the logic of the Left. 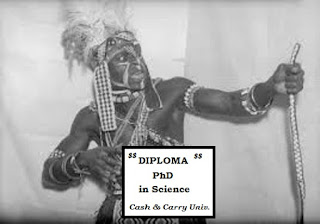 In less degenerated, less effete, times the disaster in Texas would have served as a 'wake-up call.' People would actually start to question why just a few decades ago, electricity was inexpensive, almost always reliable, and outages were rare and of short duration. Why, they would ask, with all the technology available since have things gotten more expensive, less reliable, and generally no better and mostly worse? But the recent number of outages and natural disasters haven't woken up the Ameroboobs so far, so it's highly doubtful that this event will either.
Posted by The Night Wind at 3:23 PM