The hyenas in the Mainstream Media have continued their blackout of the Canadian protests---which despite impotent threats from the Trudeau Regime---are gaining momentum and scoring victories. The Controlled Opposition Press even featured a few posturing American Republican politicians---not one of whom has spoken in defense of the January 6 protesters here---claiming that they support the Canadian Freedom Fighters. I think that we all know that if, in the unlikely event that Americans ever found the courage to move against our government, these same Republicans would be all for deploying the military to beat them down with as much force as necessary. Like Republican Senator Lindsey 'Shoot-Them-All-Down' Graham wanted to do. These people are fakes of the worst kind.

American Conservatives are tedious to talk about, so we can see what real patriots are accomplishing North of the Border. There were demonstrations in every major Canadian city this weekend and are ongoing. Here are some stories coming out. In Enfield, Nova Scotia sailors and longshoremen from the Eastern ports came out in force to support convoys headed for the Capitol. CTV News reports: "Hundreds of Maritimers lined highways, packed parking lots and showed their support on Thursday for the rally of truckers headed to Ottawa in protest of Canada-wide COVID-19 mandates.Truck drivers from as far away as Newfoundland and Labrador converged in Enfield, N.S., early Thursday morning to receive a sendoff from hundreds who braved the cold. 'This is a country which today has come together in unity to stand for freedom. We are going to Ottawa to end the mandates and get our rights back so people can go to work again,' said Martin Broadmann, president of Truckers United."

From the Western Standard Online, we learn that the Canadian Indians have joined with the Freedom Fighters: "'First Nations, Hutterite communities, and Canadian veterans are coming together to show support for the Freedom Convoy', says Dave MacKenzie, owner of Canadian Trucking Magazine.The Kanyen’kehà:ka (Mohawk) First Nations and the Mi’kmaq Nation participated in convoy celebrations. The tribes were set up near convoy routes in Manitoba and were offering to smudge drivers who wanted to participate."

Quebec---one of the most repressive states on Earth---was bracing for a major movement onto the capitol, Quebec City. The Canadian Mainstream Media tried first to incite dire threats of a massive response; and then when policemen began allowing convoys to enter with no resistance, the Press tried to downplay the support the Freedom Fighters received from the public. In fact, the protests gained more attention than the annual Quebec Carnival which happened the same weekend; and several locals joined the convoy. 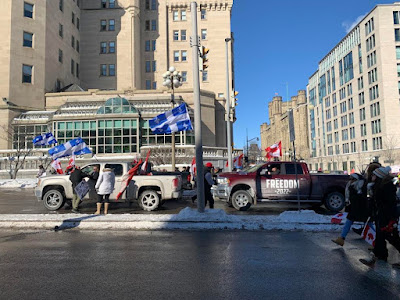 In a surprise move, Quebec Premier Francois Legault met with protesters and actually agreed to some of their terms. The Freedom Fighters agreed not to occupy the city, but would return for recurring protests until all demands are met.

Alberta is governed by a wishy-washy Neocon who variously has supported and cracked down on the patriots. Fed up with his vacillation, the Alberta Legislature has convened an Emergency Session to move to end the Mandates. It likely will succeed because the people of Alberta are overwhelmingly opposed to the Regime. The local press reported that "Another convoy descends on Edmonton to show local support for protesters in Ottawa. About 1,000 to 2,000 people now in Edmonton for convoy, with several hundred more possibly on way, according to police."

British Columbia and Ontario---the two provinces most heavily under the thumb of US interests---have redoubled their efforts to stave off the inevitable. The Elites imported Antifa and BLM from the US to scuffle with the patriots in Vancouver. The government has brought in extra police to lift the Siege of Ottawa---now entering its 10th day. The Ottawa Police gradually have been defecting to the Freedom Fighters and unable to enforce any of Premier Doug Ford's so-called 'Emergency Decrees.'

Things have now reached the point where Trudeau's own security detail have begun to defect to the Freedom Fighters. The whereabouts of the nominal Canadian Head-of-State are still unknown---but probably will be known soon since as his former chief of personal security has been appointed by the Ottawa protesters as sort of an interim Justice Minister. It's becoming apparent that the Freedom Fighters are fairly close to dissolving the Canadian Government and appointing a Provisional Government.

There still have been no remarks from the leaders of the US Junta on the situation in Canada; although Biden held a prayer breakfast this weekend where he and Mitch McConnell were yukking it up together and praising their cooperation and friendship.  The MSM discreetly ignored that display of mutual back-slapping but it was highly illustrative how 'representative' our Government really is. Canada understands but we have a long, long way to go.