Australia---which is admired by American Liberals as an ideal Democracy---has been receiving some scrutiny recently for profound losses of basic human and civil rights since the COVID hysteria emerged. For the second day in a row, secret state police battered down the door of a critic of the Regime. 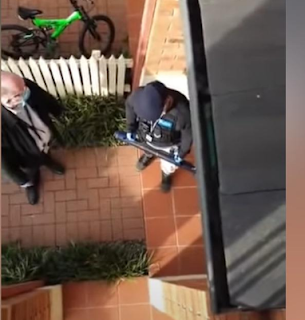 According to Life-Site News, the victim of today's violence was James Bartolo. Bartolo runs a website and a Facebook page critical of the direction Australia is going. Masked political police broke down Bartolo's door with a battering ram, dragged him away in chains, and confiscated all of his electronic devices and his collection of Japanese Samurai swords (which the Corporate Media there described as a 'weapons cache'), Bartolo managed to raise bail, but is forbidden by the notoriously corrupt Australian legal system.

It's not only criticizing the Australian Government that can bring down police terror upon one's head. The Mandatory Mask Ordinance is rigidly enforced as well: 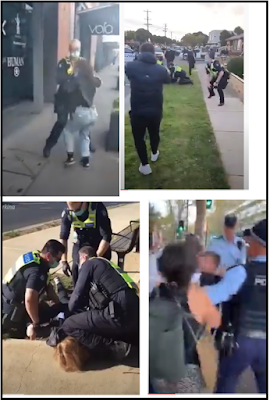 In some Australian States, the Lockdown is still ongoing and curfews are even in effect. People can be arrested and detained under this phony State of Emergency for 14 days without being charged. People have had their car windows broken out and dragged from their vehicles at police checkpoints for not wearing masks. This country needs to be investigated by the United Nations and stripped of any and all positions on Human Rights Council. The US also needs to reconsider relations with Australia.

Importantly for us, the situation in Australia is what the Radical Left hopes to achieve in the United States. Disarming the populace and politicizing the police forces has turned the country into a Terrorist State. The pre-dawn raids, use of spies and informants, jailing of dissidents without a trial, parents beaten in front of their children---it's good for us to see this in all its brutality because that is going to be our future if we don't start pulling our collective heads out of our collective butts and start doing something. We can inform people, work through the Courts, and demand that our legislators rise up and remove these Insurgent governors, etc. Support sheriffs who refuse to enforce illegal mandates. We can still win, but time is running out.