So, tonight is the night of the 1st Presidential Debate of 2020. Admittedly, I'm probably not going to tune in. Trump isn't going to tell me anything I don't already know; and Biden isn't going to tell me anything I especially want to hear. To my mind, it's still up in the air as to what the Election---assuming that we even have one---is going to look like. The criminal enterprise known as the Democratic National Committee is going to cheat---in fact, they've already started cheating. The Election is only a sideshow, because the Elite intends to take over the country regardless of the outcome.

As far as Old Uncle Joe goes, anyone with a brain can see clearly that he's only a front-man for Kamala Harris. Biden is probably one of the last surviving specimens of the New Deal Democrats and the DNC hasn't any especial use for them any more. Like Ruth Ginsburg, he's only supposed to live until November 4th; and then he's past his expiration date as far as the Elites are concerned. Kamala Harris is the ostensible face of the New America, which will be imposed on us ruthlessly once Trump and Biden are pushed out of the way. Many of us are fighting to keep that scenario from happening, but it's a grueling uphill fight---and the Elites are probably about to make another major move in October or November.

It seems in this light that Presidential Debates are somewhat pointless in light of the fact that High Finance and their Deep State Confederates have been spending the entire year working to overthrow Constitutional Democracy. The Elites know full well that they can seize power---in fact, they still may do so---but permitting an Election gives the illusion that legal processes and the popular will are actually involved. The fake COVID restrictions are of the same character: supposedly the Insurrectionist Governors are acting legally under a 'State of Emergency'; and the rioters are simply exercising their right of 'peaceful protest.' 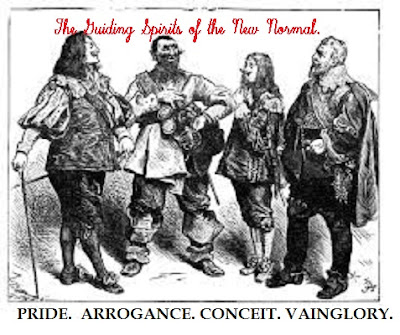 The biggest problem faced in turning back this coup d'etat has not been countering the Elites with their trillions of dollars or their low political tricks and instigated riots. It's not that the truth isn't out there or that the average doesn't see it. The problem has been that the average American simply doesn't want to see.
In spite of the many historical and psychological theories, this was what went wrong in Hitler Germany from a sociological perspective. After the Second World War ended, it wasn't uncommon for the German people to protest that they knew nothing of Nazi atrocities or were never in sympathy with the Regime. Technically speaking, the Germans weren't lying. Whatever was going on around them, they just didn't care. In fairness to the Germans, the State of Denial about their government was even worse in Italy.
The same thing is happening in America today. The Elites aren't making any big secret about their objectives. They want to tear down the country and rebuild it upon their new neo-Communist models. We've even written here about some of the think-tanks and policy centers that have plans to redesign and rebuild the cities that their goons are busy destroying. They've written on restructuring government and concentrating economic power. And any American who's paid attention to the co-opting of the Media, Academia, and Corporate America has seen it firsthand for years. They pretended not to see then too; and now---in 2020---the chickens are coming home to roost. When we see young people out burning businesses and toppling statues why are we surprised? We knew what kind of garbage they were learning in public schools and colleges but sent the kids there anyway.
Forget for a moment all the political and media lying during this Election Season. The bottom line is that what the American People need to do is to stop lying to themselves. Freedom matters; and we're not going to be a free people much longer if we continue on this path of denial. Surrendering control to an Elite doesn't make anybody free---Common Sense alone tells us that. Freeing the mind is the first step---hopefully we still have it in us as a society to do it.