A WORD FOR THE BLACK-PILLED

The term Black Pill has been floating around for awhile. Most of them are good guys, I listen to a lot of them; but the point of disagreement is that Black Pills have become so discouraged with our system that they don't even support Trump. They think that Trump is a tool of the Deep State as much as Biden is; that Elections are all farces and that who actually runs the country doesn't matter. Generally their grievances with Trump actually center on what he hasn't done. Otherwise, they do a  good job of exposing Deep State vermin, as well as crooks and scams.

Mersh, at Nightwave Radio, did a podcast on Friday which fairly well summarizes their attitudes towards the Election. Here's what Mersh advised his listeners:

"I'm not upset about this. I'm not as upset about this as some of the other people are. There are some people who are ruined by this. There are people who are already acting the way the Left did four years ago. I mean, if you're one of these who are worried that Biden is going to sell us out to China---we're already sold out to China... With Republicans controlling the Senate, nothing of Biden's will get through...

"So I think the way is focusing on your kids, and focusing on your friends, focusing on advancing at life, at your job, advancing financially, getting yourself better off physically, mentally, emotionally, spiritually---sharing things like having get-togethers with like-minded friends...and exchange ideas and books and learn from each other....I mean stuff like that is going to stay with you forever. There is so much that can be done that's positive that has nothing...nothing to do with politics."

That last paragraph, albeit condensed, sounds like Paradise. I totally agree with the value of those things. But what's wrong with Mersh's thinking is that it's based on three false premises that the Black Pills generally share.

1. They confuse 'Liberal' and 'Conservative' with the two monopolist political parties. The Republican Party Establishment---the Swamp RINOs---are controlled opposition. Just within the last 48 hours, Lindsay Graham, George Bush Junior, and Mitt Romney were already at Biden's feet, bowing to him.

2. They assume that winning the White House is the Left's End-Game. This was true of true previous elections (to some extent). The Left, since about 1966, has been following the Maoist 'Long March' tactic of using government to entrench Marxist agendas gradually while supporting takeovers of key institutions. The goal of 2020 is the final conclusion of that Long March. That means, to them, the end of Constitutional Law and the end of the Republic.

3. They assume that the Left is actually going to leave them alone in peace. The Left's leadership is made up of neurotics who can't stand leaving anyone alone. In reality, the last three decades of Political Correctness and New Normals ought to be fairly clear evidence of how much the Left actually respects individuality. "The Personal is Political," is a motto that the Left strictly observes when imposing its arbitrary will on the public.

No sooner had Biden announced his usurpation than this rolled out of his big mouth, according to reporter Tiffany Layne: "What’s his first agenda item? To make sure all Americans wear masks at all times. According to Joe Biden, he’s going to work with state governments to put his mandate in place. He wants every American to wear a mask the moment they leave their own homes, and to keep them on at all times. And if the state governors refuse, he’ll move on to the local municipalities. In other words, he doesn’t plan to give up on the masks until he’s destroyed autonomy in every corner of the country."

As we've said here before, the Mask, like the swastika previously, is being worn as a symbol of submission. In dictatorships like California, gatherings are already highly regulated and violating any such rules could result in the loss of 'privileges' like Electricity and Water, along with heavy fines. 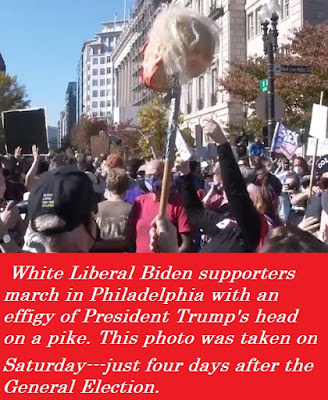 Nobody should blame men for taking the Black Pill. I was on it myself for most of the early 2000s. When Obama and the Clintons ordered the attack on Libya, I couldn't keep silent any more. It's one thing for the American Elites to enslave Americans---who have mostly long lost the moral will to resist enslavement; but it's another to see the same thugs imposing their will upon innocent people in Libya, Ukraine, and Syria. I even supported Obama's campaign promise (though I didn't vote in 2008) to leave Afghanistan and Iraq.
In 2020, we face the same situation domestically. True, most of these apathetic Ameroboobs still deserve enslavement. Whatever shortcomings President Trump had, though, he energized a large segment of Americans who've stood with him on his promises to Make America Great Again. These are the Americans who deserve our help, because deep down they are like us. They want the freedom to live their lives, pursue happiness, and eschew politics outside of its proper venues. But to do this, we need political leadership. And right now, we are in a corner and you, our Black Pill friends, are in the same corner with us.
I've been pleasantly surprised to see the number of politicians come to the aid of the besieged White House. This is in spite of the fact that the Insurgents already are compiling employment blacklists, and going even further calling for what they call "Truth and Reconciliation Committees." Clinton's former Labor Secretary and current top professor at UC-Berkeley Robert Reich said recently  “When this nightmare is all over, we need a Truth and Reconciliation Commission. It would erase Trump’s lies, comfort those who have been harmed by his hatefulness, and name every politician, executive, and media mogul whose greed and cowardice enabled this catastrophe.” Chris Hayes, an MSNBC hack at the same interview piped in, "I agree with the idea of a Truth and Reconciliation Commission and it should include people who don’t believe in wearing masks to stop the spread of COVID-19!"
The truth is we---all of us ---who believe in liberty have to hang together or hang separately, as wise old Ben Franklin warned his associates. This isn't an Election, nor is it a Selection as some Black Pills say. This is a coup d'etat---an outright attempt not only to overthrow the United States government but to destroy everything upon which that government is based. These Leftist scum not only want to reverse the three years of Trump: they want, by their own admission, to destroy every cultural advance we've achieved since the Pilgrims landed at Plymouth Rock to the present. And that's the bottom line here. The Insurgents aren't going to ignore you because you ignore them.