With the Corporate Media busily trying to cover up a stolen election and fan new COVID hysteria, important news stories often get overlooked. The sad news came to us this morning that another one of my boyhood sports heroes, Paul Hornung, passed away this weekend at the age of 84, after a bout with Dementia. He was the third of Green Bay's powerhouse team of the 1960s---following Bart Starr and Herb Adderley---to pass away within the last year.

In the interests of full disclosure here, Hornung's star playing days were a little before my time. I came to know him after he'd retired and moved into the broadcast booth. To be honest, he was one of my favorite announcers---never being shy about saying what was on his mind and a thoroughly knowledgeable commentator besides. A few old highlight films later and reading his bios, and I was hooked. He was a guy I could relate to, and wanted to be like. In those days, of course, we didn't have the Internet: but luckily I had an uncle with a VCR and a library with access to tapes of old Packers' games. I rather shamelessly tricked the old gentleman into an hour's use of his device (a VCR was something of a luxury item back then) a day pretending it was for schoolwork (which technically it was---just for extracurricular schoolwork). 😇

I studied Hornung's techniques and moves since I played the same position(s). Hornung could run, throw, catch, and kick with equal skill. I never quite made it to his level, but...how many guys do? 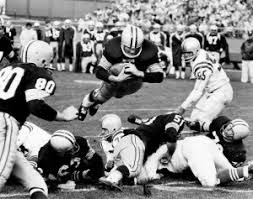 Speaking of scoring, Paul Hornung set the NFL record for most points in one season (176) in 1960. This record stood for 46 years: but remember that the NFL played 12-game seasons in 1960 and 16 when the record was broken.

“Paul could score five touchdowns in a game, kick half-a-dozen extra points and fields, and throw the ball, and probably coach if he had to. He had a great combination of brain and body.” said his teammate, guard Jerry Kramer.

Besides being a 'triple threat' on the field, I admired Paul Hornung because he embodied---and excelled at---three things that it takes to be a man: physical prowess, intelligence, and a moral code.

“Any situation you put him in he said the right thing, did the right thing,” Kramer said. “He was a principled guy, too. He had some weaknesses. He had an affection for the ladies that was powerful and fun. He enjoyed himself. I went to the Derby with him a couple times, had sensational times. Anywhere you went with him it was fun and great to be there.”

Hornung was born in Portland, Kentucky (now incorporated into Louisville) during the worst days of the Great Depression, two days before Christmas, 1935. His father abandoned Paul and his mother, Loretta, in 1939. It wasn't easy being a single mom in 1939, but Mrs. Hornung proved herself up to the task. She was a devoted Catholic and took her son to Sunday School, looked out for his education in general, and encouraged his enthusiasm for athletics. Unlike today's heroic single mothers, Loretta Hornung understood that women can't turn boys into men without male help: and she got the best help she could through priests, teachers, and the (then) positive role-models of team sports.

Paul went on to letter at Flaget High and soon drew the attention of numerous college scouts. His mom made her last executive decision and Paul chose for Notre Dame. 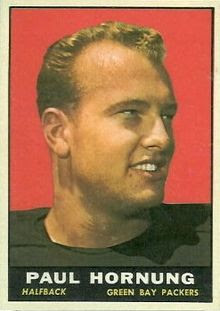 Paul majored in Business at Notre Dame and also joined the Army Reserve. Notre Dame didn't have an especially good team during the mid-1950s, but Hornung's play was so outstanding he became the only Heisman Trophy winner in history (1956) to play for a team with a losing record. In 1957, he was a 1st-Round draft choice for the Green Bay Packers---another team that was struggling. By 1960, the Packers were contenders.

Hornung stayed active in the Army Reserve, but when the Packers went to the NFL Championship in 1961, his Army Leave-Time for work had expired. President Kennedy---as Commander-in-Chief---personally granted an extension of Hornung's Leave for one week to play in the game. And the Packers routed the favored New York Giants 41-0. In that game, Hornung scored 19 points---a Championship record which stood for 56 years. Imagine a guy who wins an NFL Championship one day and is in the field with an infantry platoon the next! 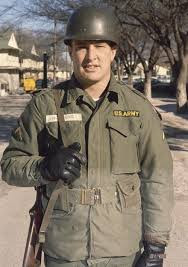 His other football accomplishments are well documented. In some of the footage I recall watching of him, he once scored five touchdowns against the Cleveland Browns on a field knee-deep in mud. In those days before climate-controlled domed stadiums the Fall weather in places like Green Bay, Chicago, Detroit, Cleveland, and New York could get a bit challenging to say the least. But that's another admirable trait about Paul Hornung: despite being one of the highest-paid players in the NFL, he wasn't above getting in the dirt and getting the job done. 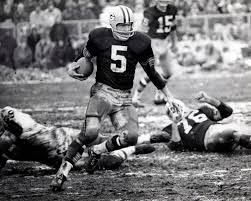 Another thing I liked about Paul Hornung was that he was man who enjoyed celebrating his successes and never apologized---like so many do today---for not being a loser. Jerry Kramer recalled: "Hornung, Max McGee, Ron Kramer, and me once drove to Milwaukee and ended up at a large dance hall with at least 500 in attendance that night. At one point, a man got on the microphone and said hello to and introduced the Packers' players in the crowd. Then he asked if Hornung wanted to come on stage and sing. I was appalled the guy put Hornung on the spot like that by asking someone who’s not a singer to perform in front of that big a crowd. But Hornung responded, 'Hell yeah,' bounded to the stage and danced while belting out an old 1930s standard, 'Goody Goody,' I said ‘Holy ----, this guy can do anything, everything,'"

Naturally, a man like this was bound to incite the envy of a certain class of poseurs; one of whom was NFL Commissioner Pete Rozelle. Rozelle was strictly a hustler and a failed athlete himself who even in WW2 was relegated to serving on an oil scow in the Navy. Rozelle hated excellence and outstanding manhood all his life; and in 1963 was trying to standardize the NFL teams into a presentable 'package' that TV advertisers would support. He suspended Paul Hornung in 1963 on a padded charge of illegal gambling which equally envious elements in the Media backed. This, despite the fact that there were suspicions in certain quarters that Rozelle owed his own position to more than a few connections to some Las Vegas betting interests.

At any rate, Rozelle's scheme to discredit Hornung backfired, and public pressure forced Rozelle to eat crow and reinstate him in 1964. The Packers went on to win two more NFL Championships and the 1st Super Bowl before retired in 1967 due to an incurable neck injury. And the jealousy continues to this present day: witness the snotty obituary penned by some PC nobody; and that the scumbag mayor of Louisville has even denied a public service for the hero under pretenses of the Scam-demic.

Hornung was twice married; his current wife (of 41 years) survives him. Besides his work in sportscasting, Hornung was active in the Louisville Community---especially with Catholic Charities.  Louisville radio host Terry Meiners said: “He could always make people laugh and comfortable, and it didn’t matter if he was talking to some world famous athlete or the nuns in the west end who work at the Catholic Charities. Hornung continued to donate to Catholic Charities over the years, giving back to his old neighborhood.He always sent money to the nuns in the west end had money so they could distribute food and clothing to the poor people because that’s the neighborhood where he group up."

In 2004, Hornung was involved in another controversy after explaining live on an ESPN interview that Notre Dame had gone downhill as a university because "We can't stay as strict as we are as far as the academic structure is concerned because we've got to get the Black athletes. We must get the Black athletes if we're going to compete." This indiscreet (though factually accurate) observation drew down greater public outrage than university dumbing-down of Admissions Standards did, and Notre Dame has continued its decline along with the rest of American Academia. True to form, Hornung never apologized for the statement. After being diagnosed with Dementia, Hornung began investigating the NFL's long-standing cover-up of play-related injuries mostly designed to cheat former players of healthcare costs. He became an activist on behalf of his brother players up until his death.

WAVE 3 News Sports Anchor Bob Domine said:  “Like Muhammad Ali, Lenny Lyles, like so many other huge stars from our city, Paul was right there with them and he always carried himself with a certain stature, but he was always kind and gentle and caring...He was never too big or too in the spotlight to take those he knows and cares for in mind.”

"Bright, aware, funny, passionate,” concluded Jerry Kramer, who joined Hornung in the Hall of Fame last year. “Just a hell of a guy. I just enjoyed the hell out of him. I always felt lucky to be wherever the hell we were together. Wherever the hell we happened to be, it was always fun to be with Paul. (He) always had a little more personality and a little more depth than you expected.”

Thanks for all you gave us, Paul. Resquiescat en Pace; you've no doubt moved on to a better place. 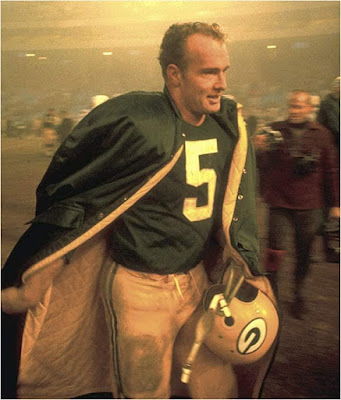