ARE THE INSURGENTS PLANNING TO BRING IN FOREIGN TROOPS?

Today, probably to no one's surprise, the Media Hyenas were baying with one unified howl that any suggestion of voter fraud against President Trump was fake news. They've been pushing that narrative weeks---especially the Tech Titans who've been shadow-banning blogs like this one and carefully dissecting dissenting voices from their platforms. Now in this effort they count on the NPCs of America to forget that only a year ago, they were pushing a demonstrably fake Impeachment farce accusing President Trump of having stolen the 2016 Election. 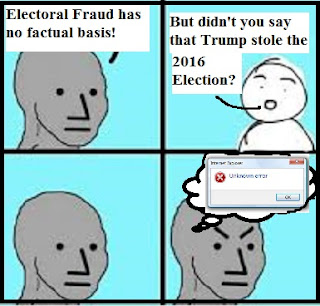 To follow the MSM's line of reasoning, Trump stole the 2016 Election, but somehow under his administration the Electoral process suddenly became more fraud-proof to the point where he could theoretically lose. And that, while we were being fed stories that Trump might not "accept the Election results" and there was an impending "blue wave". The MSM can't possibly be putting much faith in the American people's intelligence.

In fact, this entire disgraceful display is a sad commentary on the utter contempt the Elites have for the American people. Personally, I didn't think they would try anything this blatant. Some cheating in local races, yes. But a power-grab for the Election wasn't even something I'd considered. My feeling all along has been that the Election was a smokescreen---that the Elites predicted an impossible electoral 'Blue Wave' and the inevitable Trump win would give them the platform to claim fraud. To pull off a wholesale takeover like that, Podesta, Clinton, Gephardt and the other technical strategists behind the Coup must have figured into their calculations that they'd meet with no resistance.

Sadly, in retrospect, I can't blame them from a purely tactical standpoint. They've seen through years of experience that the American male has become so thoroughly emasculated and devoid of any will to assert his Rights that he can be cowed into anything from being strip-searched without a warrant or due process at any airport, to voluntarily donning a muzzle in public. They anticipate the opposition to be so weak (in numbers) that traitors like pundit Peter Beinart openly called less than a month ago for the United Nations to send troops onto American soil to enforce the overthrow of our own government! 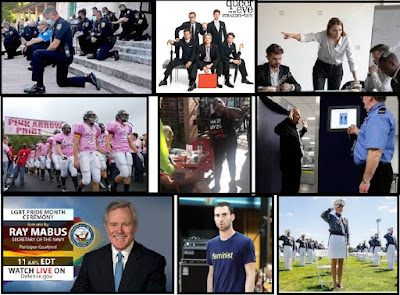 The fact of the matter is, however, that the numbers of activists on both sides is small. The percentage of Americans fighting for freedom and the percentage of those fighting to take it from us are less than half the population combined. The majority of Americans today don't know the difference and could care less. All that most American men would need to hear is that UN Occupation is a new normal; that it won't interfere with their daily drug consumption or online porn surfing and they'd set about immediately learning how to conform to the new system and what opportunities to profit by it have come up.

For those of us who are willing to fight, we need to drop the romance and face the reality that even though most of us are determined fighters and proficient with firearms, the day-and-age when Minutemen could assemble and go toe-to-toe with a professional army is over and has been since around circa 1945. That's one thing that makes Binert's suggestion a plausible possibility.

One rather ominous international trend that has emerged since Binert's suggestion is that just coincidentally a 'second COVID outbreak' is causing lockdowns across Europe---which means that these 'peacekeepers' would be coming mostly from West Africa, the Middle East, and SE Asia and would be most heavily represented by China. Binert forgot to mention that little detail. A UN Force would also occupy and headquarter in our major cities---how convenient for them that the police forces in metropolitan areas have been defunded and disbanded. City police departments were the only group with the organization, training, and armament to resist such a usurpation. Again, certainly that is only a coincidence. 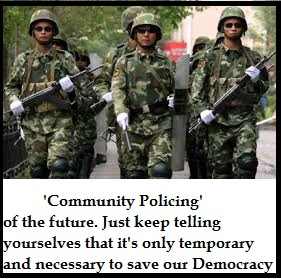 Now many will be tempted to dismiss the notion of UN soldiers on our streets as improbable; but consider the mere fact that Binert would never have written, nor The New York Times' editors published, such a dastardly op-ed without permission and approval from their masters orchestrating the Coup. The Clintons were floating the idea back in the 1990s, and as recently as 2017 other Whackos on the Left were demanding foreign intervention.

In less PC, more virile times, Binert would have been shunned as a traitor and probably ended up writing gossip-columns in sleazy supermarket tabloids under a pseudonym to earn a living; while the Old Grey Lady would have lost enough subscriptions and advertising to drive it into bankruptcy. But that was then and this is now. Today we can't depend on our friends and neighbors not to sell us and our country out---and at bargain prices.

Now more than ever those who cherish freedom need to pull together and get behind the plow. Whatever differences we've had are irrelevant now---supporters of the President and the legitimate government are on our side and need all the help and support we can give them.