A couple of important deadlines are approaching with the onset of the next month. The first is that President Trump's Executive Order 13925, which revoked legal liability for the Tech Lords' arbitrary restrictions on free speech, was repealed by the Junta on May 14th. That revocation will de facto go into effect in June; and even though the Oligarchs have been disregarding the law roughly since last November, they'll more or less have carte blanche from now on to take anybody down anytime they wish for any reason with no recourse to the writer. Oh, well. Orange Man Bad, now take the consequences.

The second upcoming deadline is a document dump of files relating to Unidentified Flying Objects, which is being treated by the Corporate Media like a re-release of The X Files. Forbes Magazine has already dubbed 2021 "The Year of the UFO." This data release also stems from a Trump Executive Order, which probably quite tellingly (and this is a fact that shouldn't be overlooked) the Junta has made a point of not revoking. In fact, quite the opposite has been happening: we're seeing a wave of 'leaked' UFO photos and statements; discussion is going on openly in the Media without the usual sneering and ridicule; there also seems to be a noticeable absence of 'fact-checkers', algorithms, and Youtube disclaimers usually pasted on whatever the Elites decide to term fake or questionable news.

So basically what we have is government run by Corporate Interests, upheld by Infotainment, a government which bases its policies on celebrity scientists who sell their reputations to the highest bidders, has taken some extra steps to curb free speech online and which has a history of faking news to fit their agendas on a colossal scale: these are the people who are going to make one of the most important statements about universal truths to a population which is---for all intents and purposes---scientifically illiterate. What could possibly go wrong in a scenario like that? 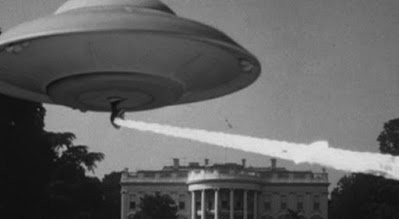 Earlier this month, we posted an article outlining some of the recent history and controversy surrounding these stratospheric phenomena. Then today, Disenchanted Scholar went ahead and touched the 'third rail' of this topic, with the suggestion that these occurrences might be demonic. Now, of course, in our enlightened and sophisticated postmodern era where there's no such thing as Evil (unless it's politically-correct evil which we all have official permission to hate), such a suggestion is bound to bring down hoots of derision. To my mind though, it brings to mind a saying of Voltaire's to the effect that "Atheists always demand proof of God's existence, but they never ask for proof that the Devil exists." I suppose since Voltaire's time, they have a consensus of Settled Science on that question too. 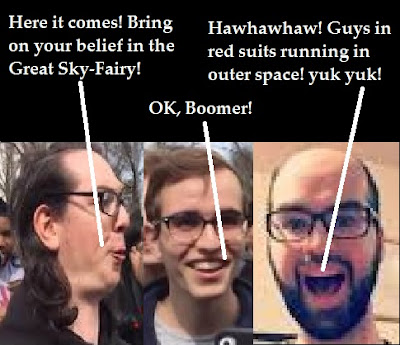 Except for one small detail: Disenchanted Scholar actually backs up this opinion with some hard facts."They’re not from another planet as they claim, but from another DIMENSION. Namely, Hades, Tartarus, the Hell of Biblical fame."

She adds that "fire is technically a light too! How else would you (or a prophet) visualize it? So to say they’re creatures of light is technically correct! Distrust most New Age people about this. The New Age has been explained to me as The Age of Blood, a ‘great’ slaughter to earn the next stage or level or ‘peace.'"

Whether they are from the Inferno or not, the important point is that what she says about extra-dimensional travel is correct. The doctors of all major religions teach that spiritual beings exist in a dimension unknown to us; hence what she says is logically possible. But assume for the moment that the beings visiting Earth live on a far-away planet. Now, even NASA has admitted that it wouldn't be at all a difficult matter to equip astronauts for a trip to Mars or even Jupiter or Saturn. The problem is the Time Barrier. Mars is doable, at about a seven-month trip. Jupiter is about six years. Saturn would be around eight years; we're talking ten or more years further out. The closest constellation to Earth, Centaurus, is a 100-year trip.

All of this means that beings from other planets would have to have the capacity to travel through the dimensions---specifically of time. 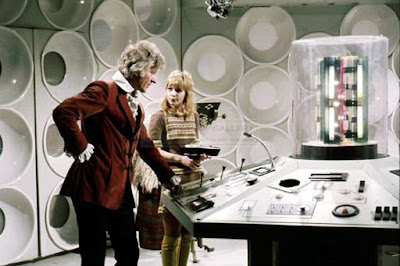 Let's draw an analogy. Suppose that you wanted to drive from Los Angeles to New York---in 15 minutes. A car operating on this kind of technology would suspend time relative to your position until you arrived in New York and find that only 15 minutes had passed. The other 48 hours that it normally would take are breached; in other words, your technology allows you to travel faster than time can pass. Needless to say, we have no idea how that could be done. That's in the physical dimension. Theologians teach that time does not exist in the spiritual realm---which, in theory, would make it possible for spiritual beings to move through time and space. While that sounds like a rather Mediaeval cosmology, it makes logical sense if one accepts the premise that angels, demons, and spirits exist.

So are these phenomena from the Infernal Regions? It's difficult to say. The Church has affirmed Marian Apparitions, and Mary would have come from Heaven through another dimension to get to Earth; not to mention the Incarnation of Christ, or some of the revelations given to Hebrew prophets. And other religions have claimed revelatory encounters as well---all the way down to stories of haunted houses and documented poltergeist activity.

Where this all leads us is that the probability of these objects being of extraterrestrial origin is very slim; that they are from an evil extradimension, possibly. That the current ruling Elite is going to turn the truth into a 'narrative' aimed at furthering their agendas, highly likely.

This whole tale about "disclosure" has the stinky fingerprints of Klaus Schwab and his transhumanist merry-men all over it. Nothing would suit the purposes of these Great Reset nutcases better than a 'scientific revelation' from Above (i.e. a higher life form). Don't imagine for one minute---after what we've seen from 9/11 to the Color Revolution---that the boobs wouldn't fall for it. They'll laugh at God and the Golden Rule; but an actor posing as an alien (or maybe even a real devil)---they'll listen to that.

It's hard to say if it will go that far; but the bottom line here is: think for yourselves. Biden and his camarilla are proven liars and cheats. Do not take anything the Junta says about this at face value. Even if they say there's nothing to these sightings; investigate and find out what they really are. Or if they go the other way and lay some great revelation on the public: doubt every word of it until proven to your own satisfaction. Bear in mind that a lot of spooks have had plenty of time to play with this forthcoming evidence.

The only certainty I have at this point is whatever is coming out of this is unlikely to be anything good. Experience has taught us that whenever the Democrat Establishment, Mass Media Cartels, and Big Tech join up and start priming the public on a topic---something bad is about to happen. My real fear here is that, since they've failed to stop religion, they're going to invent a fake revelation from a 'higher power.' Let's not forget that these Great Reset clowns have a very specific role for religions in their overall schemes.

In reality, I would like nothing more than to see Mary and about a dozen of Archangels appear in the middle of those hearings and explain in no uncertain terms that God is displeased and show them all the future state of their souls if they continue in their evil ways. Seeing all of those smug Senators, Deep State spooks, and media shills on their knees repenting and vowing to make us a Christian nation again---now that's a scene I'd believe in.