THE VICTIMS AND FANATICS ALL AROUND US

We've had occasion to note recently that we Americans have (collectively speaking) lost our moral compass. People seem either to dismiss moral values as irrelevant; or else they've internalized the 'personal is political' nonsense and make their judgments based on what the herd's consensus of the moment happens to be. People on the Right are just as guilty of this as the NPCs on the Left.

Recently, I left a comment on a very pro-Israel article on a Conservative site about the current crisis in the Middle East. I pointed out that Israel isn't exactly an innocent victim in this conflict. Besides doing a few little things like its persecution of Christians, being one of the most brutal enforcers of the Scam-demic, and being a world leader in forced vaccines and vax passports, the Israeli Government has also fomented regional instability by sponsoring terrorism. Israel also is currently the world's leading exporter of domestic espionage technology. And let us not forget that after President Trump went out of his way and risked international outcry for his support of Israel, the Israeli Government unceremoniously threw Trump under the bus and jumped on the Biden bandwagon before the stolen election was even certified. Israel, incidentally, is the only Middle Eastern country which recognizes homo 'marriage' and one can see 'pride parades' in some of the most noted Holy Sites in the world.

Of course, the accusations of anti-semitism came fast and furious. Now, every regular reader here knows that I am not anti-Jewish and really have no issue with having Israel as an ally---but the same is true of any other ally: the Israelis need to start behaving like a civilized people and stop resting on its laurels of Cold War service to us. Israel, and the Jewish Community in general, keep getting a free pass and are quick to call anti-semitism like the Black Lives Matter gang are quick to call racism on everything. My grandparents' generation went to Europe and fought the Nazis, and their grandparents' generation beat down the Confederacy; so fighting for the Rights of Man is ingrained in my system. Yes, there was Slavery and the Holocaust, but I'm not guilty of either one; and the fact that one's ancestors were unjustly treated doesn't translate into a license for their descendants to commit the same crimes. 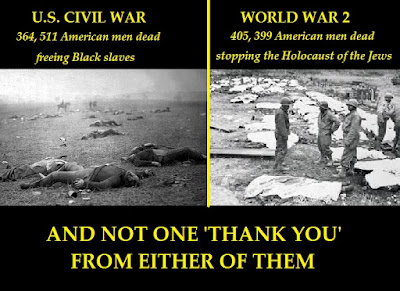 Besides the amorality of playing the 'Victim Card' by which Political Correctness excuses anything; our culture also is exhibiting a strong tendency towards fanaticism in political or social causes. There was a story just today in the New York Post stating that, even though New York is lifting its Mask Mandates, many of these COVID cranks are not letting go. And of course we've all seen the fanatical Left and the Great Reset kooks as well as the crackpots of the Vox Day Red-Pilled types on the Right. What is it in human nature that runs to these extremes and why are we seeing so much of it today? 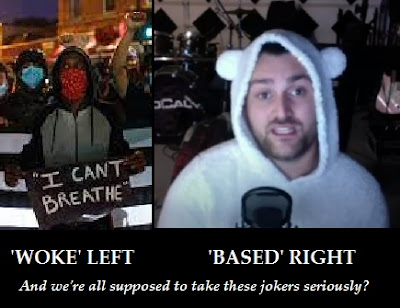 Victim-card playing is not difficult to explain. We see even small children doing it as a way to escape punishment. I recall once my nephew was playing with matches and actually burned a hole in a chair. Before he got a good spanking, he protested that a witch appeared and made him do it. I told him if that was true, he needed to punished for listening to witches. In a society we need to deal with Victim Cards the same way.

Fanaticism is more difficult to explain, but psychologist Theodore Reik pointed out that existential fear and doubt leads, in some people, an effort to suppress the attraction to the feared concept. This is not necessarily a bad thing because it depends on motivation. Reik distinguished fanaticism from what he called enthusiasm. The enthusiast in, for example, religion may subconsciously have doubts about his Faith, but these doubts are overpowered by his love for God and spurs him on to become even a saint. The Whacko Left Wing made a big deal a few years ago when some of the late Mother Teresa's private writings were published. Some expressed her occasional doubts of her faith and calling, but in reality this is predictable in a character like hers. The fact that she had doubts doesn't make her a hypocrite, it only shows that even saints are "subject to like passions as we are;" and her Left-Wing detractors only show their own ignorance.

If one wants to find hypocrites, just look for the smug, self-righteous types (like most Liberals) who know all the answers to everything and never entertain the slightest doubt that they might be wrong. Self-love is what motivates them to the point where today, rather than admit they're wrong, they change the 'narrative' and become the same pompous proponent of things they denounced just a few days before.

Unlike the the Enthusiast, the fanatic is motivated by hatred. The fanatic also has doubts and fears, but he translates that hatred upon the object of his fears and goes after it with viciousness and brutality that defy reason. In the religious sphere, the late Reverend Fred Phelps was a good example of a fanatic. While Christians look upon homosexuality as a sin and desire to convert the sinner and lead him to a right way of life, Phelps would run around waving signs on the street that "God hates fags" and other obnoxious nonsense. Phelps was obviously a latent homosexual himself; and projected his self-hatred onto those who were more open about their perversion. Phelps represents no real Christian as St. John says "he who fears is not made perfect in Love." The religious enthusiast is aware of this, so they try to become more perfect in Love; the fanatic is just a fanatic no matter what creed he hides behind.

That is how one tells the difference between a committed believer in a cause and a fanatic. The committed believer is motivated by Love and is willing to sacrifice for the love of what he believes in. The fanatic on the other hand is consumed with destroying the opposite of whatever cause he nominally supports. It is very important to recognize the difference because in our morally bankrupt culture the tendency is to lump all beliefs and actions into a sort of Manichean dualism where actions or opinions define absolute good or absolute evil---depending upon which political position happens to accept such views as a majority. The example given earlier about disagreeing over U.S. support for Israel, and being called an 'anti-semite' and a 'left-wing Liberal' shows that this mindset has infected Conservatism to a great degree as well.

There are people on both sides of the political spectrum who talk of a Civil War 2.0 as the result of our divisions in this society. I'm very certain that many of those who talk like this genuinely desire that another civil war actually happens. Fanaticism and the 'personal is political' doctrine is a sure way to bring it about if such attitudes get deeply accepted as normative.

St. John also wrote that "a perfect Love casts out fear," and abandoning precepts like this are what got us to where we are today. Americans haven't always been the best examples of Christians, but previous generations trusted the Bible and its teachings when in doubt. The Left today snorts at the Bible as the work of Bronze Age Bigots while too many on the Right see it as impractical idealism. Both sides have adopted a 'win-at-all-costs' mentality which casts aside morality as an old-fashioned relic. Like Vox Day infamously asked his own deluded followers: "do you want to stand on principle or do you want to win?" That is neither a Christian nor a Conservative attitude---it's the language of a fanatic---because we either stand on principle or we're no better than what we oppose. I wouldn't want to live in any amoral utopia designed by Vox Day and his merry-men than I would living in one crafted by the Great Reset fanatics.

Moral Rectitude is neither Left nor Right; it simply is. Whenever we hear anybody on either side demanding 100% obedience to settled science or any other ideology; and expressing their desire to put dissenting sides down permanently, it's time to turn your heel and make some fast tracks away from them as quickly as possible.