So, in our corner of the Blogosphere, a Cold Case we've been following has apparently reached a successful conclusion, at least at the stage of identifying the victim. More details are forthcoming, but so far the mechanics look fairly sound; and as we said in the last post, we're sort of sitting it through as the news breaks. I understand that, by the standards of today's culture, I'm supposed to be angry and butthurt because 3 years of building a theory may have turned out to be wrong. But, meh---that's the breaks. Reverse-engineering a story is a lot more difficult than writing one.

The weekend was a bit rougher on the trolls who've stalked the case for a long time. On Thursday, we criticized them in a post; on Friday, they found themselves deprived of a context to throw tomatoes; and it's nearly a week before the end of the month and the prescription refills come in. Here's a specimen of how badly they're starting to spiral: 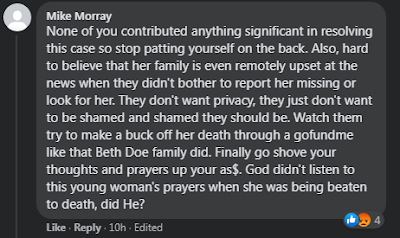 That fairly well sums up the spirit of these people. Remember that only a short time ago, these were the same knotheads who were throwing online tantrums at our site: "Well, if he's got all these big revelations why doesn't he publish them?" Yeah, a lot of good that would have done. Imagine all of the Slander, Defamation, and Libel Suits I'd be digging myself out of right now if I'd listened to these dorks. But, I'm sure they wouldn't consider it too small a price for me to pay for their amusement.

Our site hasn't had too much of a problem with trolls until recently; the last bunch that really came lashing out were the Red Pill MRAs after a few of them started getting exposed. The 'Internet Sleuths' ought to be a little ashamed to see that they've fallen to the same level as cultists who follow the likes of Vox Day, Chateau Heartiste, and Owen Benjamin.

Trolls aren't a new phenomenon in the world; but the rise of the Internet has given them the ability to form communities. The New Testament even talks about them: "gossips, backbiters, envious" is how these types of people were described in the past. True, in many cases, envy is a big component of being a troll; but it's not the only cause. Trolls don't even rise to the level of failures; because someone who fails is someone who at least tries. Oftentimes, failures are learning experiences and the attempts often produce a lot of good results despite the larger goal not being achieved. In contemporary parlance, trolls would be better classified as losers. They are a class of people never produce anything of value. They are passive spectators in life who get their sense of self-worth from lowering others to their level---sort of a passive version of the bully. Inferiority Complexes are typically at the bottom of trolling on a personal level---often with our national narcotics problem fueling the impotent rage.

Trolls are problem and there's no universal solution to how to deal with them. Ignoring them generally works for most of us. That approach usually causes them to spiral worse until they end up like Vox Day did; just a cackling Boomer blockhead whom nobody pays attention to anymore. Sometimes calling them out and ridiculing them works too. The trolls have no sense of humor, and deflating their egos often makes the other trolls turn against them, like sharks who smell blood. They end up like Dalrock did; where even his enormous ego got so badly blown out that he had to slink away from the public sphere. Trying to reason with them never works because self-righteousness and blind rage are motivating them and clouding their intellects. They crave validation although there's nothing to validate.

Above all, we can't let trolls affect our own attitudes. We just have to accept that their presence is a fact of life in this imperfect world. Dealing with them is just another unpleasant task like calling Pest Control, or having the septic tank pumped, or filing an insurance claim. Fortunately, simply hitting a 'delete' button usually solves the Troll Problem; and then we can focus on the bigger issues.