FINDING FREEDOM IN A FAILED STATE

I have to admit that writing has become something of a challenge lately. I miss the times when exposing corruption, destroying cults, and working out unsolved mysteries were all that we had to worry about. And some philosophy, psychology, and history thrown in occasionally, it was actually enjoyable. Today one disaster follows on top of the other; and it's not like the people of the Anglosphere didn't see it coming. The thing that has come to a shock to most of us was that, before (and even during) 2020, there was a belief that many---if not most---Americans would pull together and fight for their freedoms if their backs ever got pushed to the wall. What we've learned, however is that most Americans have been willing participants in the degeneration of our culture all along. While we're focusing on Americans, the reactions of the British, Canadians, Australians, New Zealanders, Israelis, Irish, and South Africans---the whole Anglosphere---has been just as bad. And whether one identifies as Left or Right we see the same thing. InsanityBytes summed it up really well recently:

"I really do have a problem with some conservatives and conservative Christians, right leaning folks, on account of the fact that there is sometimes a lot of wishy washy going on, a lot of self serving, flexible “values.” I got mine, so screw you. How can I make a profit off of this? Complete entitlement. I deserve to thrive and if I crush people in the process, oh well. This is what I stand for…unless there’s a profit margin being harmed in which case we just aren’t using those standards anymore. It’s kind of like that GPS in your car, forever recalculating, recalculating…

"A lot of us, many of us, feel as if we were lied to. We were sold the American dream, we were told to just get a better education, we were told to just work harder, we were told to just learn to code, we were told that if we followed the formula and obeyed the rules, we would reap what we had sown. We were lied to, lied to in politics, lied to when it comes to the economy, and lied to in faith. It’s kind of like beating yourself up everyday because no matter how hard you try, you just can’t seem to make it, only to discover the 'self made business owner' you admire so much, didn’t get rich mopping floors at night, she inherited a trust fund. Also, she’s got a great profit margin going on because she’s laundering money."

Yesterday, the Head-of-State appeared on television to list a new series of policies issued by his Corporate Overlords. Basically, the Junta is purging the ranks of the Government of potential dissidents and has obliged the Corporate Oligarchy by purging them of disloyal elements as well. Nobody seems to have drawn the obvious inference between the immediate withdrawing of troops from abroad just ten days before these mandates were handed down and the determination of the Elites to back up their orders with bayonets, if necessary. 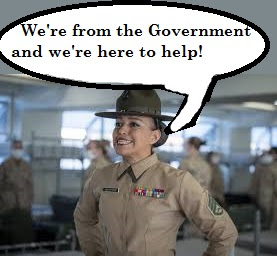 So a dozen or so State Governors popped up and said that they are going to fight the Regime's mandates in Court. Let's look at the recent history of how successful this has been. Remember how the States passed legislation in 2005 to defend private property from being seized by Corporate interests? The Supreme Court ruled that Corporations had Eminent Domain powers and the GOP folded. Remember how they were all going to stand against Obamacare? Which State is still holding out? Answer: zero. Trump couldn't even get a Republican-controlled Congress to repeal Obamacare.

Remember how 36 or so States codified legal marriage to exclude homo 'marriage'? They promptly caved in after a Court decision; even though their were enough States to overturn the Court with a Constitutional Amendment, nobody even tried. In fact, they even fired and jailed officials who protested. Remember how 17 States petitioned the Court to prevent the stolen 2020 Elections? What happened there? It's the same here. All of these protesting States will do nothing when it actually comes down to concrete action.

Aside from the distraction that the Controlled Opposition is putting up; what's actually going on here is a purge. Purges usually always follow Revolutions. The Mask and the Vaxx were never designed for public health reasons, they were designed as marks of compliance with the Regime. They don't want non-compliant people working for the Government, nor for their owners in Corporate America. So far from creating resistance, they are consolidating power. The Elites are not concerned about alienating an Electoral base. They are interested in creating a base of people who follow orders. The new mandates will make it almost impossible to challenge the Deep State because everyone within its ranks has proven their allegiance to it. Dictatorships in the past accomplished the same thing with Loyalty Oaths. The short-term goal of this Regime is to create a one-party State. The new mandates are a step in that direction.

All of these would-be leaders of the Right are in it for themselves. If, during the last 18 months, any one of them would have refused any more Federal money, ordered their county officials not to enforce any of these illegal laws and declared their sovereign Rights regardless of the consequences, they might have had some credibility. If Republican Senators had refused to take their seats in 2021, the Senate would have no quorum and the Junta would have been paralyzed. They might have had some credibility too. Maybe if Republican Congressmen had introduced legislation repealing all of the post-2001 laws their own Party had installed that created the Surveillance State in the first place, they might be believable. Instead, they'll fight to the last drop of your blood; but switch sides the minute that their own positions look threatened.

What we need to do instead is building networks and communities outside of the Regime's control. With all of the people laid off and put out of work for resisting the Regime, and all of us who are already resisting, have skills which we can contribute to each others' welfare. The old methods are going to get us nowhere.