It's been some time since we've given an update on this story, but one of our contributors has pointed out that the few people still concerned about this case have been asking for updates. Admittedly, the hysteria around the so-called 'Pandemic' and the general political and social upheaval have slowed research down considerably, but it's still ongoing. We've been getting some more information coming in: and that is another main reason for posting these occasional updates, to encourage people to come forward. Unlike the Walker County Sheriff's Office, we don't disregard tips; nor do we berate, intimidate or threaten people who provide them---as we've heard now from several sources that WCSO does.

In fact, during the last few months we've spoken to some who've given tips to WCSO and they've helped move things forward in spite of the obstacles. One man living near Huntsville who remembered seeing her and a woman from Aransas Pass who knew of her have given us a fairly good idea as to who she might have been. The current difficulty gaining access to both archival resources and travel have made obtaining some vital evidence hard to obtain; but once we've secured it and it matches, we'll make her name public. What we can say for now is that it looks now like at least one of the tips that Carl Koppelman posted on his WCJD Facebook page from 2015-2018 was right after all, and maybe even some others despite the apparent contradictions in what the witnesses remembered after 40 or so years.

I hope that this latest information will bear some fruit, not only so that WCJD can finally get her name back, but all those well-intentioned people who tried to provide help and suffered browbeating from WCSO and ridicule from brigades of online trolls will be vindicated. As for identifying her actual killer(s), we now think there were three men involved; two in the actual murder and the third with tampering with the body and crime scene.

I realize that some readers would like more details: eventually they will come out and we appreciate your patience. There's a huge difference in how some cases have to be handled. When you have a good and active police department and an involved family like we've seen in the Alameda County Jane Doe Case, one can talk fairly openly. When you have a lethargic police department and little/no help from family like in the Prince George's County Jane Doe Case one can still be fairly open because no one's going to take any interest unless you do all of the work for them. But, in case like Walker County Jane Doe's case, you have a police agency that is directly opposing solving the case and a family which---as far as I can tell---has chosen to keep silent, then it's another matter.

There are two main reasons for the different approaches. One is that, in this circumstance, we have to have enough evidence to present to a Federal Prosecutor; which we intend to do. In this case, one can't name names or make accusations without something that can actually be disputed in Court. The second reason is that, because we're dealing with a hostile investigative agency, it's not wise to publicize everything that we have; both on the case and on them. They've been a bit lax in their own security lately, and as they say in the MSM, we have "a source close to officials" in/around Huntsville---thus whatever contingencies and subterfuges they have planned, we probably already know about.

Take for example, statements from characters like WCSO Sgt. Danny Billingsley who's supposedly been in charge of the investigation. When he finally got around---after 39 years---to getting NCMEC to do a composite, he told the Huntsville Item that "There are some composite sketches out there of Jane Doe but none of them looked alike" (Query: and nobody thought this was an issue?) "We worked with NCMEC and now we have one that we believe looks like the victim at the time of her murder." No seriously, this is coming from somebody whom IIRC saw the actual body and has viewed the autopsy photos. One of the very first things that seemed 'off' about this investigation was that none of the official composites look even remotely alike: 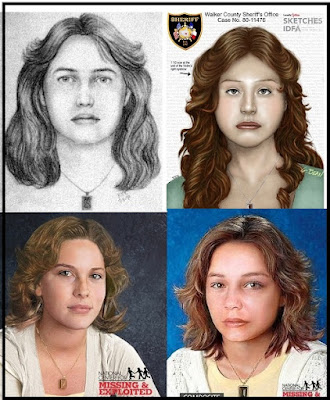 And none of them look especially similar to the autopsy photos. In fact, the only consistent feature is her necklace: another piece of evidence that WCSO has conveniently lost. "We would love to get her identified" Billingsley claims, "which would be somewhat of a win, and to catch her killer."

"Somewhat of a win," he can't even muster enough fake enthusiasm for an interview. Of course, he was talking to The Huntsville Item which rarely has anything but the most effusive praise for Walker County authority figures. Billingsley is also being a bit disingenuous "hoping to catch her killer," since he's apparently been quite vocal in his belief that Henry Lee Lucas was the killer, in spite of having no evidence. This seems to be the official party line; in the 1980s, Detective Ted Pearce told an interviewer that, "We had the bite mark on her left shoulder, and when I went to interview him, he told me he had dental reconstruction done. I was devastated. We had photos of him before, and his teeth looked like they would have matched the bite mark, but we just couldn't make that match. I still believe Henry Lee Lucas killed this girl." Considering that Lucas had a long criminal record, and that prisons kept dental records---or for that matter, they knew who'd done his dental reconstruction and had records---they could have made comparisons. But they didn't.

In fact, assuming that WCSO hasn't 'accidentally' since lost the dental impression, they could theoretically check them against the names of the two men whom we suspect were involved in the killing---since one happens to be incarcerated right there in Huntsville and the other a military veteran---but they haven't done that either.

None of the information WCSO has given about this case has ever made any sense.  The autopsy report lists her as 5'0-5'2, 100-108 lbs, age 14-16. WCSO says that she was 5'5-5'7 abt. 110 lbs. age 16-18. Yet a witness who saw the night she died was able to make a positive ID from the autopsy photo alone. Another WCSO apparatchik told the press years ago that: "She was a very beautiful young lady, and she had been cared for. She was clean and had been well fed, and her teeth were in good shape. We knew right away she wasn't a transient. I promise you, somebody knows this gal. She just didn't fall out of the sky." I've also thought that a bit peculiar too. Witnesses indicate that she was in some of these very small villages nearby at times and regularly hitch-hiked into the Huntsville area: it seems very strange that so many Huntsville officials living in these same small hamlets and regularly driving the same roads never noticed her. "No one came forward to identify her:" is that really believable? 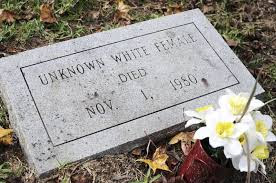 Definitely, now is a good time to come forward with information, so hopefully this article can be shared. As I mentioned above, there are also a number of trolls and troublemakers apparently brigading articles on this case. I don't like bothering with these kinds of things but here's a specimen of nonsense that's been circulating on the web:

No, it isn't connected to PJ Media and the idea that it's run by the wife of  'Ex-Army' was started by some genuine conspiracy kooks connected with the Alt-Right of the MRM. Spreading these rumors around are bad enough, but what's more troubling is that people like this seem to enjoy muddying the waters because they'd rather LARP online and have endless controversy. I'm not a believer in the postmodernist doctrine that "the personal is political" so whatever political opinions expressed elsewhere on this blog really have nothing to do with this case. And BTW, in other cases that I've worked on, nobody in the families or LE concerned has ever bothered to ask whether I voted for Trump or not. For some reason, they seem more concerned with getting cases solved.
Here's another specimen:

What's troubling about this kind of comment isn't so much the implication. It appears on a forum where they have four full threads of discussions since 2009 and no solutions, after all. What's troubling is the attitude behind it. The writer seems to think this is all some show we're staging for his benefit and, as a member of the audience, now he's booing because the play's gone on too long. All that I can really say here is the only person I'm doing any of this for is WCJD. I'm not acting for my own benefit, so I'm certainly not acting for yours.
I usually don't like giving people like this attention, or responding to these kinds of comments, but I have had people forwarding them to me lately. I also don't mean to put down Websleuths because there are some good people there doing good work. But in light of the baseless conspiracy theories we've been accused of promoting, now we have this to deal with following the Gabbie Patito Case: 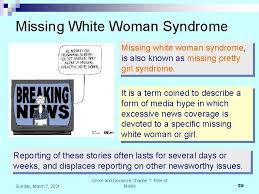 It's now become politically incorrect to help find/identify missing White women. Not that I especially care about Political Correctness, but this does make it a bit harder to get the Media to look into a case like this. Just like the fact that WCJD was a White teenager running free and thus couldn't be turned into a national martyr like some 350-lb. Fentanyl addict has made it harder to get help from legal sources.
I really had hoped that we'd not see this case go to 41 years with no resolution, but we're living in a truly evil age and things are unpredictable. All that we can do is to do our best, and we're going to keep at it.