10 MORE SHOPPING DAYS 'TIL THE BOMB

Admittedly, living in a society where living under the threat of potential atomic war and annihilation was something the two generations (i.e. the WW2 and Boomer generations) experienced more than I did. I graduated not long before the Soviet Union collapsed. The threat of The Bomb was something I remember mostly from childhood. Yes, we were taught what the Air Raid Siren meant and where the fallout shelters were. My uncle had a white helmet marked 'CD' and we were taught that they were there to help us in an emergency. There were regular tests of something called the Emergency Broadcast System on television and radio.

Growing up as a child in area where tornadoes, blizzards, and the occasional factory or railway disaster made the news with some regularity, it was hard to understand what 'emergency' could be more serious than that: none of these things were ever mobilized for such mundane catastrophes. As a child, it's somewhat difficult to wrap one's mind around the idea of something more of an emergency than that. 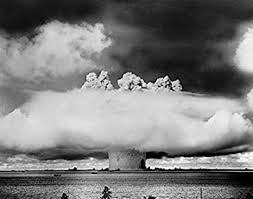 Children, of course, have an underdeveloped conception of reality. Unfortunately, in our postmodern dystopia, adults are having a difficult time with the concept as well. The Bomb has made it's way back into public discourse. Last week alone, some stupid Neocon said publicly that the US should not rule out the use of atomic weapons to curb the alleged 'imperial' ambitions of Russia and China.

After the Junta seized power in 2020, it was inevitable that war would be somewhere in the scheme of things. History teaches us that when megalomaniacs take over powerful nations, their first impulse is to conquer other countries that stand in the way of world domination. Usually this happens around the same time these regimes have run out of domestic resources to plunder and have a perpetually angry populace looking for a scapegoat. Not to mention that when this Regime has a stated goal of global depopulation, an atomic warhead or two is a rapid way to meet this objective.

Aside from the fact that neither West Ukraine or Taiwan is worth defending (even by their own citizens), the idea that the US and it's NATO lickspittles are capable of winning a nuclear war with anybody is so delusional as to be laughable were it not so serious. The Bomb isn't just something one drops and solves all of their problems. Much of this stupidity stems from the hubris generated over our recent history of militarily pulverizing small and relatively defenseless nations after hysterical media campaigns had the Ameroboobs worked into frenzies that, unless we intervened immediately, Serbian or Syrian panzer divisions would be rolling through the streets of Chicago and Baltimore. Haitian and Panamanian Expeditionary Forces would be landing on our shores at any moment: and even Iraqi or Libyan bomber squadrons could have free control of our skies!

Neocon idiots have discussed deploying on these countries too before. But we've apparently reached a stage where these clods have started believing their own propaganda. Both the Russians and the Chinese have warheads capable of reaching North America; as well as dozens of US/NATO bases well within their range. And the fact is that the United States is utterly unprepared to prevent any of that from happening. We have had no significant upgrades in domestic missile defense since the 1990s; and no Civil Defense programs to speak of since the 1980s. How many of us know where the nearest fallout shelter is? The average Russian or Chinese does.

Our atomic offensive capabilities too are in disarray; and the situation has become so bad that President Trump ordered upgrades. But it was Orange Man Bad; and the Scamdemic/Color Revolution sidelined most of those projects. Even the Junta seems to have grasped that Trump was right and lately has been putting the Pentagon to work analyzing the situation. Sadly, they seem to be operating on the idea that stopping the Russian or Chinese can be achieved with our outdated technology---largely because they are hopelessly ignorant of the capabilities of either of those two nations.

Effects of an atomic war---which incidentally haven't been studied for many years---estimate that one-half to three-fourths of the US population would not survive. None of these deficiencies have been discussed by the hired Corporate Media which is puffing off this rather serious threat with no more concern than they have for rising gasoline prices. What bodes even worse for us is that the average Ameroboob doesn't even see the danger. Walking around in a drug-induced stupor, he's looking for any target whom the Media tells him to focus his rage. 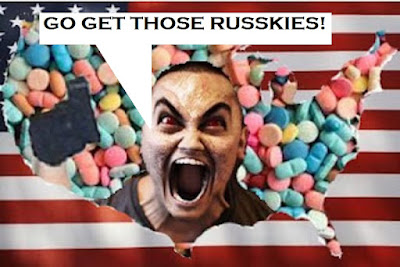 How great a threat is Atomic War? The state of Denial and Unreality which most Americans are living in makes it a real open question. The political leadership here has degenerated as much as society in general has. We've had a few shock-jocks on the Right who've pompously declared that we should turn Iran and North Korea "into glass." Typically though the Deep State scum---whether Left or Right---beat their chests and talk tough, but slink away whenever a major power stands up to them.
The real danger here is that the seeds of nuclear destruction is being planted in the Ameroboob mind as a legitimate policy weapon. During the Cold War, the threat of The Bomb insured negotiations. Nobody wanted to launch the First Strike because the Retaliatory Strike would mean Mutually-Assured Destruction. But that's not what's happening here. These psychopaths are apparently assuming that a First Strike is not only justifiable, but that other atomic powers wouldn't dare retaliate. The International Bully has made a fetish of projecting his own power and duped his supporters into believing in his invincibility. Clinton, Bush, and Obama may have slithered off when faced down and the Junta still might do so. But that doesn't mean that future generations who've been raised on the Might Makes Right philosophy is going to exercise the same level of prudence. When you have majorities in Western nations who have no qualms about turning the police and even military loose on any group whom they've convinced themselves are a "threat;" it's highly unlikely that they be squeamish about committing atomic massacres. Nor will they have any misgivings about accepting the casualties and sacrificing more of our freedoms for temporary emergency measures.
Make no mistake either that the Elites don't want a major war. They've been priming the population for World War 3 for decades. The so-called 'War on Poverty' the 'Drug War' the 'Gender Wars' the 'War on Terror' 'the Race Wars' and the paramilitary rhetoric and actions surrounding the Scamdemic have put the average Ameroboob's mentality into virtual perpetual State of Emergency. No American under age 30 or so has lived in a culture where we haven't been under some kind of 'Emergency' Laws. It's all a big VR or LARP to them; more daytime drama IRL. As for the Elites, they could care less about casualties. They'll make a fortune building back better and cheap labor can always be imported or outsourced. Nobody though is going to be able to cheat reality this time; although I expect they'll give it a good try.