THE DIRECTION OF THE MAJORITY

So, there appears to be another 'revolt' breaking out in Academia. An open letter, signed by 911 prominent professors of Mathematics condemns the recent attempts by the Junta and others to abolish Advanced Mathematics in schools.

“We are deeply concerned about the unintended consequences of recent well-intentioned approaches to reform mathematics education, particularly the California Mathematics Framework. Such frameworks aim to reduce achievement gaps by limiting the availability of advanced mathematical courses to middle schoolers and beginning high schoolers...Subjecting the children of our largest state to such an experiment is the height of irresponsibility… While the US K-12 system has much to improve, the current trends will instead take us further back."

There's much truth in this statement. However, there is another issue of concern. Where exactly were all of these concerned professors when Humanities Departments were being purged to make room for more 'inclusiveness' like CRT? They didn't seem to care when Science Departments were being hijacked by Big Pharma and Big Tech to get 'settled science' behind their NWO Agenda. They weren't complaining when competent Administrators were being forced out and replaced with political hacks. They had nothing to say about students and faculty forced out over the phony Mask Mandates and the Loyalty Vaxx. Now that the 'New Normal' effects them, it's suddenly a problem.

If it sounds as though I haven't much sympathy for them, it's because I frankly don't. It's like about 90% of the other problems that we face in America today. Americans are outraged about it all but most of our problems are of the American people's own making. Certainly, the people didn't formulate or execute the Cultural Revolution now sweeping over us, but they went along with it all. The Elites were aided and abetted by the combined greed, selfishness, apathy, and sheer stupidity of the General Population.

This was a matter that came up again at a recent article on InsanityBytes blog. I don't disagree with what she said, but I did take an issue with it in the comments. It covered a topic we'd written about previously. She said the following:

"I think we really have to lower our expectations. Most people are dealing with the stress of life and just trying to provide for themselves and their families. They genuinely don’t have time to do research, to fully understand what is going on within their government. They are pretty much voting for brands and quick sound bites. They are good people. It’s not their fault they don’t understand who the oligarchs are or even what an “oligarch” is."

This intrigued me because it's the kind of thing I would have said up to about a year ago. What's changed? Well, simply the fact that what we suspected was happening behind the scenes for the last 30 years have now become so blatantly obvious that there are two things I can't bring myself to believe, namely 1) that the majority don't know what's going on.

I believe that we've reached this point not because people didn't know, but because they didn't want to know. I was involved in a debate on a 'Conservative' site recently where parents were claiming adamantly that they had no idea about the Leftist takeover of public schools. I flatly asked how they could not know: which drew down a torrent of wrath but no explanation. Rarely is an explanation forthcoming. The Public Schools weren't doing any of this in secret; I saw it happening back in the 1990s.

That's just one example. The other point I've come to doubt is 2): that Americans are basically good people. That may have been true a few years ago, but the events of the last 18 months have shown the majority of Americans to be composed mostly of chiselers, cowards, and opportunists who'd sell out their neighbors and even family if they thought there was even the slightest advantage to themselves by doing so.

I recall sometime during the Obama years a radio talk show host asking for calls from people connected with the Military, FBI, CIA, etc. about why there was no resistance in any of these organizations to the direction that Obama was taking us. The general consensus was that these organizations had a large contingent of people who'd follow whatever orders they were given; along with another group of mostly older personnel who were simply biding time until they could retire. "There are mechanisms to complain and effect change" I recall one caller saying, "But the general understanding is that nobody is going to have your back if you try and there are plenty of others willing to take your job." This phenomenon has long been the case in other professions: Academia, the Corporate world, the Media among others. Americans have had a fairly strong recent track record of looking the other way and going along to get along.

IB also said that: "I think I’ve spent a great deal of time trying to forgive those who have betrayed me, dropped the ball, collapsed into a soggy heap when they should have had my back. The only good thing about all that, is that it has brought me closer to the Lord. He was the ultimate victim of our cowardice and betrayal, and He still gave up His life willingly for us." There is truth in this also; and many times I've said Forgive them for they know not what they do. Which is an appropriate response when those who've failed us didn't understand what they were doing or grasp the consequences of their actions (or inaction).

I still feel a level of this for younger 'woke' people. This unfortunate group has never known any better. They don't---and frankly can't---understand why Freedom is important to those of us who actually lived under it. They've never known anything but life in an authoritarian structure where Security and Surveillance were normative social values. It's understandable that their solution to our problems is simply replacing the leadership with another just as autocratic but differently focused. Likewise they've imbibed a strong dose of the hypocrisy prevalent in the older generation, in that they have no concept of Absolutes or Reality; and believe that these things are simply matters of Consensus.*(see note).

It's an entirely different matter for those who knew better and let this happen. I'm sorry to say it, but my ability to forgive is simply exhausted. We've come to a point where the Regime is sanctioning the overt destruction of our cultural heritage; and are openly discussing further plans to restrict our human rights even further. Pundits have actually been floating the idea of Concentration Camps with inhumane treatment for those they consider disloyal to the Great Reset. Does anybody seriously believe that those who passively let the Regime close their churches and businesses would lift a finger to prevent this from happening? I don't. On the contrary, I think the average American would enthusiastically push his neighbors into the gas chambers if he thought it would benefit him personally. 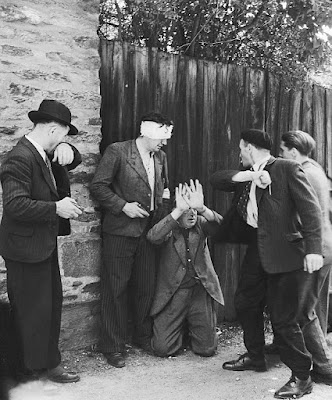 The fact is that we, collectively speaking, are in a very dark place. The Regime is not going to back down. In fact, they are encouraging further division, hatred, and scarcity of resources to get us to turn against each other even more. We have to understand that we are not only dealing with a failed State, but a failed Society as well. We have to respond by redoubling our efforts at the local, community, and familial levels to operate outside of the 'New Normal' if we hope to survive at all.

*Note: I thought that this statement might need some further clarification. Young Americans have grown up in a social milieu where platitudes about freedom and morality were preached but rarely practiced. The Hypocrites excused their behavior by saying that they were just being "realistic." Many young people have rejected the platitudes of their elders but held onto the cynicism and methods that they used. The marked intolerance of the 'woke' is a result of that way of thinking. A good example is their attitude towards traditional families. They grew up in a world where it was touted as an ideal, but nobody ever actually practiced it; hence they reject the ideal but see no problem with forcing acceptance of nontraditional arrangements. Those who want a return to traditional families are seen by them as naive and foolish because it's realistic to accept the sexual anarchism they've always known as normative. That same method of reasoning underpins their opinions on nearly all sociopolitical issues.