IN YET ANOTHER STRANGE ELECTION

While Democrats and Republicans are once again demonstrating the {ahem} 'superiority' of our electoral process with 24/7 finger-pointing, accusations of fraud, and lagging vote-counts; there's been another election of sorts which has stirred up a controversy on social media. I'm referring of course to a Miss America Pageant (yes they still have those in the PC United States) which was won by a rather porcine male who identified as female.

As a sheer act of humanity, I won't post its photo here, though there is one on the link. Meanwhile a musical intermezzo might explain the situation better.

The article points out that "Before becoming president of the United States, Donald Trump co-owned the Miss Universe franchise. Earlier this month, Thailand’s first billionaire – a transgender media mogul called Jakkaphong ‘Anne’ Jakrajutatip – bought the company for $20million. The 43-year-old has already scooped up prizes and accolades meant for successful women, and has been widely celebrated as the competition’s first ‘female’ owner." Rather like Bruce Jenner being hailed as 'Woman of the Year' by several media outlets a few years ago; and more recently men-who-identify-as-women smashing several Women's Sports records.

This phenomenon has actually gained something of a pushback from Radical Feminists who are finding out the hard way what it's felt like to be a man for the last three decades. The Feminists who object to this form of discrimination 'inclusion' are derisively referred to by the Tech Lords and Social Media Secret Police as TERFS. This is the second thing that Feminists are learning the hard way: that the Left has no loyalty to its allies once they've served their purpose.

The first indication that things were going sideways for the Radical Feminists was their notable lack of appointments to the new government after the November 2020 putsch in favor of a notable percentage of the Gay Mafia being elevated to powerful offices. The decline really began in late Obama's term when it became unmistakably apparently that the NWO Agenda was to replace genders---literally---women as well as men. From the 1970s onwards, the Radical Feminists laid the groundwork for their own demise: denigrating women's social roles, disempowering men, pushing anti-family agendas, reducing gender to a mere social construct, etc. Now that they paved the way for the Gay Mafia to set the new normals. As far as the Oligarchy's concerned, the Radical Feminists have done their work and now they are expendable. 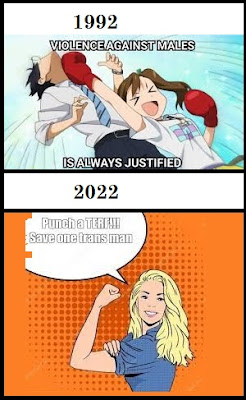 While I don't think that one can muster too much sympathy over the downfall of Radical Feminism; we do need to be aware that what's replacing it is a lot worse. We ought to note as well that if this is how 'woke' Leftist ideologues treat their friends, imagine what they intend to do to their enemies.

At the same time, I can't bring much sympathy to the table for the women being cheated out of positions once reserved for females. For the last several decades, American women have gone along wholeheartedly with the Feminist Agenda. When marginalizing men was in their interest, hijacking 'male space' and unequal preferences for women were all fine with American women. Hillary and Oprah were great role-models for our daughters, "strong independent women who knew how to put Chad and Tyrone in their places and crush that evil Patriarchy (which actually never existed). Well: that's just too bad. Maybe if we had a few 'strong males' still around, there would somebody willing to defend the fair sex and respect female spaces.

Unfortunately, such male voices fell the victim of Feminist-inspired cancel culture. Dead White Males who actually studied these subjects could have told you that the homosexual has a marked contempt for traditional gender roles and that masculine and feminine psychology are two different things---that shoehorning women into social roles meant for men was going to lead to terrible social consequences. But that didn't matter as long as women got power over men via things like legal abortion, unequal divorce and custody laws, the ability to use rubber terms like sexual misconduct as a weapon, and Affirmative Action.

Maybe now that American women have had an opportunity to walk a mile in his shoes, some semblance of Reality might start sinking into their brains. But we're not holding our breath.