Holidays seem to be becoming increasingly meaningless in the United States today. Christmas/New Years have been relegated to merchant's holidays; the Gay Mafia has taken over Valentine's Day and Halloween: we've even created special victim's days like MLK Day and Juneteenth where Blacks can bash white people for a Legacy of Slavery (never mentioning however that the majority of slaves were actually sold by African chiefs, who had large surpluses and wanted to rid their kingdoms of rival tribes). Columbus Day has also been taken over by American Indians to play the victim card and bash whites for Stealing their Lands (never mentioning however that most Indian tribes previously took their lands from earlier aboriginal peoples). The entire month of June---traditionally the month of weddings---has been given over to so-called Pride Month and February---formerly when we celebrated the legacies of Washington and Lincoln---has been turned into a racialist orgy extolling Critical Race Theory.

Holidays, though, do still reflect the values of a culture: it's only that the values have changed. Since we're essentially a culture today characterized by greed, degenerate sex, and playing the Victim Card, it's natural that we should have special days glorifying these vices characteristics. Yet, until recently one of our major distinguishing national components has been ignored. 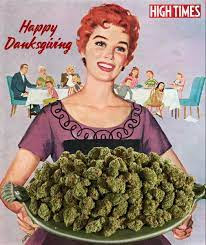 And thus we have the postmodern Thanksgiving: a tribute to Americans' love of dope. Why not? Marijuana has outpaced all of the traditional Thanksgiving agricultural fare to become America's leading cash crop.

The co-opting of Thanksgiving began shortly before the Scamdemic; heavily promoted by vested financial interests in the marijuana industry. In fact, some of Big Pharma's physicians in Ohio even penned the following PSA for last holiday season:

"Who doesn't love Thanksgiving? Spending time with friends, family and loved ones, eating some delicious food (often a little bit too much), and reflecting on the things that make us thankful in life. It is a tradition that has existed since the inception of our country, generally looking the same across generations. That is until cannabis enthusiasts got involved and created their own tradition for this holiday - Danksgiving!

"We have discussed in the past the origins of cannabis use in the Western World, however, none of our ancestors could have foreseen an entire Thanksgiving meal that had been infused with cannabis! While for many the term Danksgiving may simply mean medicating prior to the meal, due to the developments in cannabis science, we now live in a world in which nearly any food-item you can think of can now be infused with everybody's favorite plant - cannabis. While edibles are currently available in Ohio dispensaries, the idea behind Danksgiving often involves infusing many of the toppings such as butter and gravy that are used to make any Thanksgiving food item cannabis-infused!"

Bear in mind, this was written by medical doctors in a state where marijuana is legal for medicinal purposes only.

According to most of the media, the transition from a Day of Thanks to a Day of Escapism is a rapidly growing trend. That observation was borne out today as I was out and about and noticed that the local dispensaries were outpacing grocery store sales traffic even on the limited holiday hours. There's apparently a movement to extend Thanksgiving to the entire week. 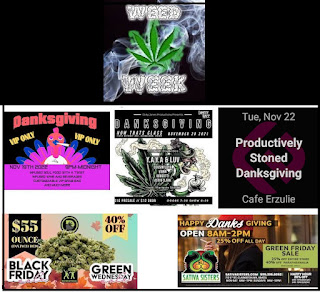 Given the known health effects of regular high-potency dope consumption, the SSRI's and Opioids that pill-mills dispense like candy, the depleted uranium that Wall Street deploys to its global battlefields, and the side-effects of the Loyalty Vaxx---the next 5-15 years are likely to see some significant health crises. It's not as though the quality of medical personnel is improving either. We're already actually seeing the results of some of these things: increasing mental illness, a rise in premature deaths and overdoses, declines in fertility and birth rates along with an increase in infant mortality. But the Oligarchs will find something else to blame it on; the Media will repeat the lie, Academia will claim it 'settled science', the Tech Lords will close down discussion, and the Ameroboobs will go along with it all.

The irony of all of this is that the marketing shylocks picked Thanksgiving as a vehicle to hawk legal pot. Ameroboobs nationwide are actually giving thanks for dumbing themselves down and being drug addicts! The cynicism behind this is as bad as their shamelessness in promoting the Scamdemic and Election Integrity. Sadly, though, the American people aren't making their jobs too difficult.