A QUESTION ON 'CONSERVATIVE' CHRISTIAN VALUES

So, it's happening again. Less than two weeks after another questionable election, George Bush's hand-picked candidate as Texas Governor, Greg Abbott, has made headlines again by dumping another load of human cargo, this time on the streets of Philadelphia in the middle of winter. About 50 South American men, women, and children were packed onto a bus with no food, money, or water and carted on a 40+ hour trip and tossed out onto the sidewalk ironically not too far from Independence Hall.

Last week, the first busload from Texas appeared in Philadelphia, dumping 28 migrants at 6 A.M. at barely above freezing temperatures. The City was not even notified of their arrival. A child passenger was taken to the Emergency Room suffering from dehydration.  The City was not notified of this recent arrival either, according to spokeswoman Laila Sadat. "Texas officials have not coordinated with the City, despite a direct request from Philadelphia's Office of Emergency Management to do so. We do not yet have any specific information about those on board, nor do we know if other buses are planned."

Philadelphia Mayor Jim Kenney rallied relief efforts nonetheless. Local non-profit organizations like Casa De Venezuela and Juntos helped organize resources for about 30 families who plan to seek temporary shelter in North Philadelphia. "So far it's been very smooth. People are thankful. Get a little coffee a snack and go to the shelter," said Fernando Torres with Casa de Venezuela.

For his part, Mayor Kenney stated that, “If it is Governor Abbot, they should re-examine their Christian values because they talk about it a lot, but they don’t do much. It's not just unproductive and disappointing, but downright irresponsible and calloused to do this unannounced and without coordination, showing blatant disregard for the sanctity of human lives. The city took the right path. We’ve welcomed tens of thousands of Afghans, Ukrainians, and if you go back into our city’s history, every ethnic group that is here came as refugees for the most part, and these folks are no different. We have human dignity, decency, and the responsibility to make their transition as smooth as possible, that’s what this country is all about... 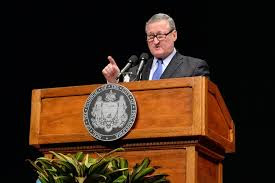 Dylan Fernandes, a Massachusetts legislator who visited an earlier deportation site at a church in Martha's Vineyard, made a similar observation:  “These governors or whoever it is, all they care about is scoring some political points on Tucker Carlson and Fox News and the fact that they are using human lives — women, children, men — as pawns in that and just really abusing these people dropping them off in a place where they don’t know where they are with no food and water just to be able to get in Tucker Carlson and Fox News’s good graces is disgusting. It’s inhumane. These people claim to be Christians? This is about as un-Christian a thing as you could be doing. It’s evil.”

While I don't typically agree with Liberal Democrats, I would like to hear exactly how Conservative Christians can justify Abbott's actions and explain exactly how Mayor Kenney is not taking a more Christ-like approach. So far, we haven't heard too many (actually none at all) defenses of this policy on Christian grounds. Are there any?