SO WHAT'S UP WITH CHINA?

There have been some stories coming out recently about protests which have begun in several Chinese cities. As usual, the American Media isn't especially reliable when reporting about events in China. China has a 'zero-covid' policy which has led to some excesses in some locations and seems to be the focal point of these demonstrations. There's also an element of dissatisfaction with the recent elections held by the Communist Party of China extending Xi Jinping's presidency to a third term. The elections in China were about as divisive as the ones here: Chinese presidents since Mao have been informally limited to two terms; and Xi has some opposition among the Commissariat---mostly those who feel he's over-reacted to the Scamdemic on one hand, and hardline Maoists who feel he's been too soft in foreign policy. His opponents failed to mount a united opposition. Xi does have some support mainly because of his exceptional economic successes like the New Silk Road Project and rebuilding China's infrastructure.

These current protests are not actually 'pro-democracy' protests such as occurred during the late 1980s; nor are they the fake Soros-backed Color Revolutions like recently occurred in Hong Kong with imported provocateurs. These are not large or widespread and Xi has mostly been reacting with a mixture of police dispersing demonstrators and agreeing to at least some of their demands. Though passed over in silence by the American Corporate Media, the Chinese Government even issued a rare apology for police brutality and publicly condemned such actions.

What's troubling about all of this finger-pointing and media dismay over what is or will happen in China, we conveniently overlook all of the Crimes Against Humanity committed right here in the West. Here in the United States, for example, we recently had an election of our own. The destruction of human lives and poverty engendered by Scamdemic policies was barely even whispered during the campaigns. In fact, only one Governor who seized power during the lockdowns---the atrocious Steve Sisolak in Nevada---paid for his crimes with electoral defeat. Not one American in a leadership position has ever been held accountable for their actions during the national hysteria. 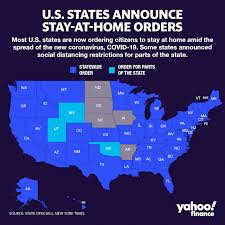 Lest we forget: Democrat and Republican States alike de facto suspended the 1st. 4th, 5th, 6th, 7th, 8th, and 14th Amendments, along with the Writ of Habeas Corpus and prohibitions against Bills of Attainder. Troops were dispatched to seal borders, search private homes, and seize public transportation. Churches, libraries, and schools were closed; people were jailed indiscriminately and forced out of work without due process. Thousands of businesses collapsed without compensation. Anti-lockdown protests were suppressed and anybody with manhood enough to assert his rights was denied services. For this, nobody faced Justice.

Then we have Canada: which was even more repressive than the United States. Currently, a Kangaroo Court in the Canadian Parliament is making a show of 'investigating' the Canadian Government's actions during the so-called 'emergency'. Many Canadian policies are still place.

Canada gained notoriety first through its draconian policies against freedom of movement, then its militarization of the 'crisis' culminating in the brutal suppression of pro-freedom protesters, which we have since learned was aided and abetted by the United States. How many Canadians were killed during the massacre is still unknown; let alone how many have died subsequently after being stripped of their assets and their Rights and hunted down like wild animals during the orgy of Political Vengeance which has followed. Likewise, we still don't know where the army of thugs dispatched for the purpose came from, or where they went afterwards, but I think that we can all make a fair guess about that one.

In Canada, children can---and are being---removed from homes of political dissidents.

The Canadian Government was also boasting about building special 'internment camps' to deal with the 'crisis.' Again due to their national security laws, we have no way of knowing whether these camps are in use, who is in them, or the extent of them. And we want to criticize China? 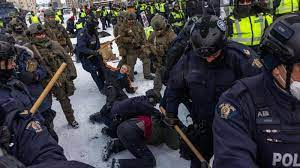 On the subjects of internment camps and police brutality, not even Canada can match the appalling human rights records of Australia and its satellite, New Zealand. Australia only partially lifted its isolation requirements about six weeks ago. For nearly two years, Australian borders were completely sealed including the ability to communicate even by mail to the outside world. These restrictions included travel between states internally which since has required a Travel Permit (which were notoriously difficult to get).

Both Australia and New Zealand initiated extensive public and private censorship which are still ongoing. Yet this is a country we call an 'ally' while hypocritically condemning China's lack of transparency. People have been jailed in Australia too for speaking out against Government policy.

Immigrants on work-visas in Australia and New Zealand were rounded up and ejected from the country. Foreign nationals weren't the only ones subject to this kind of brutality: citizens supposedly with Rights were likewise routinely seized and dragged off to detention camps. In both countries, police brutality was unrestrained and encouraged during protests. with beatings, gassings, and reports of shootings a regular feature. The Internment Camps, incidentally, are still in use; and both Australian and New Zealand media rarely ever mention exactly what happens to protesters or dissidents after being taken into custody. 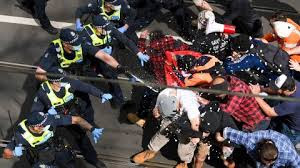 In 2020, Britain's current king was still a prince, but busily attending photo-ops with Klaus Schwab boasting of the Scamdemic's potential to bring about the Great Reset. We can well imagine what this meant for the state of human rights among his future royal subjects.

On a per capita basis, the British probably suffered more economically than the other Anglosphere countries, which suspiciously mirrors some in the U.S. Deep State's threats about the economic consequences of ratifying BREXIT. A British Civil Rights' group noted that:

“Police were handed extraordinary powers to enforce the lockdown and detain anyone who could be infectious. Early on we saw overzealous policing with officers using drone-surveillance to shame people online. As the pandemic continued, rapid changes to the rules were accompanied by more chaotic communications, leaving people fearing criminal sanctions for unknown offences. The result was widespread overpolicing and the over-use and abuse of new and old powers. Individuals, communities, and long-term trust in the police have been harmed as a result of the Government’s determination to approach a public health situation with a criminal justice crackdown." 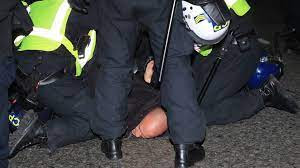 Fortunately for the British, the press wasn't as easily controlled or cowed as the rest of Anglosphere, and subsequent scandals and exposures brought a dramatic rollback of many restrictions. Charles' goals were temporarily frustrated, but the damage done to Britain economically and socially is probably irreversible.

The behavior of a country like China is what we would expect from a one-party, authoritarian State. However, the behavior of the rest of the Anglosphere is also what we'd expect from a one-party totalitarian State. We of the English-speaking world are supposed to be the global model for self-government, respect for human rights, and the rule of Constitutional Law which ensures that Government is a public servant---not a tyrannical overlord.

China's reaction to the alleged pandemic was---and has been---excessive. But there is no excusing the fact that Western countries in general not only copied China's policies: they frequently exceeded them. To divert public attention from these crimes, Western Governments---with the complicity of the mass-media and the Tech Lords---fabricated numerous hoaxes about alleged brutality committed by Chinese authorities. They also universally blamed the Chinese for releasing the virus, although that story is highly suspicious.

The same is happening with coverage of the current protests in China. With the Official Narrative on Ukraine rapidly collapsing, the Oligarchy is looking for new villains to distract Western attention from their own increasing poverty, enslavement, and oppression. Our Governments are behaving much like abusive parents frequently do: holding up examples of real (or alleged) abuse in other homes as 'proof' that it doesn't happen here. Let's not fall for this kind of evasion of responsibility. It's time that we stopped worrying about China and started dealing with our own would-be tyrants.