WHY I AM EXASPERATED WITH THE RIGHT

So today the Junta---again with considerable GOP backing---established a new federal holiday called 'Juneteenth'. At least that's what it's called in the Corporate Media. Its actual title as spelled out in the legislation is Juneteenth National Independence Day. Yes, you've read that correctly. Just as Memorial Day seems to been supplanted by remembrances for our new national martyr, George Whats-His-Name, we now have an 'alternative' to Independence Day, the former name of July 4th.

Just in case anybody is interested, 195 of 209 Republican Congressmen (you know, our Conservative leadership) voted in favor of the new holiday. 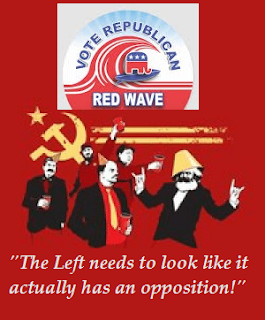 I have an older dictionary written before Woke Culture by a dead White male who entered a definition of the term 'revolution' as: "In politics, a material or entire change in the constitution of government." With that definition in mind, let us consider that since it assumed power the current government has 1) established an alternative ensign to the national flag; 2) set up alternative holidays to the previous national ones; 3) jailed political opponents while clearly discriminating in policy against them; 4) pledging allegiance to foreign agendas (e.g. the UN and WEF) over the American Constitution; 5) repealed laws against desecrating national monuments while promoting alternative histories to be taught in all schools; and 6) expanded the police powers to spy upon and harass opponents.

The question here is: how much more explicitly can the so-called 'Biden/Harris Administration' spell out that they are engaging in a revolutionary policy? And it ought also to be apparent that there's no real political opposition to any of this. Take, for example, the passage of Senate Bill 1260 last week. Congress' own official summary of 1260 reads:

"The Office of Science and Technology Policy shall annually develop a strategy for the federal government to improve national competitiveness in science, research, and innovation to support the national security strategy. The Department of Commerce shall (1) establish a supply chain resiliency and crisis response program to address supply chain gaps and vulnerabilities in critical industries, (2) designate regional technology hubs to facilitate activities that support regional economic development that diffuses innovation around the United States, and (3) award grants to facilitate development and implementation of comprehensive regional technology strategies."

Which essentially amounts to is turning what the Corporate Oligarchs were already doing in fields like domestic espionage and control of the national food supply on both land and at sea into national policies. Taxpayers will fund these programs from now on---relieving much of the financial strain on Big Pharma, Big Tech, and Agribusiness. Academia Incorporated will profit too: those same charming folks pushing policies like Project 1619. Incidentally, the Cabinet Minister to whom these 'scientists' report their progress is Gina Raimondo---formerly a governor distinguished for employing the National Guard to go door-to-door enforcing Scamdemic quarantines and setting up military roadblocks to enforce travel restrictions. 35 of 50 Republican Senators voted for her confirmation.

The Act also sets up a new directorate which " establishes various programs and activities" meaning a think-tank of sorts which will enforce the agenda. "This bill establishes a Directorate for Technology and Innovation in the National Science Foundation (NSF)...The goals of the directorate shall be, among other things, the strengthening of U.S. leadership in critical technologies through basic research in key technology focus areas, such as artificial intelligence, high performance computing, and advanced manufacturing, and the commercialization of those technologies to businesses in the United States." While such goods can be researched and sold here in the U.S., however, the manufacturing can be outsourced. The final draft of the Bill, released by the U.S. Senate, included other areas subsidized including advanced communication, bioengineering, and advanced energy.

What none of our 'Conservative' leadership seem to have noticed---nearly 20 GOP Senators voted for the new law---is that there is nothing in this law that couldn't be accomplished by the private sector---assuming that these technologies were intended to be put to good use. The fact that they are being monopolized by a handful of corrupt academics, arrogant bureaucrats, and fanatical corporate ideologues---with near no public transparency---leads us to suspect that their intentions are less than honorable here. 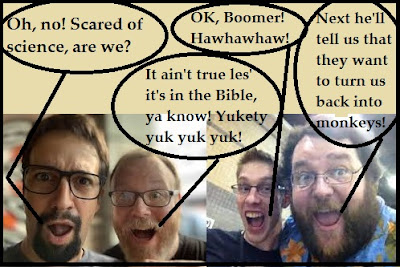 The Elites of course would never do anything as sinister as playing with human hybrids would they? Unfortunately, they not only would, they've already started. Two months before S.1260 was passed, a professional journal for microbiologists wrote: "A team of scientists from the U.S., China, and Spain reported Thursday they have created the first embryos that were part human and part monkey and kept them alive for up to 20 days in laboratory dishes." Although the project is allegedly all for the purpose of promoting human health, the story was first exposed by the Spanish Media after details of the secret experiments were leaked to them---the main secret being that a laboratory in China is handling all of this.

"In Spain, this type of research is heavily restricted and limited only to investigation into deadly diseases. 'We are doing the experiments with monkeys in China because, in principle, they cannot be done here because of lack of infrastructure,' explains the vice chancellor, who plays down the fact that her university is Catholic. 'What we want is to make progress for the sake of people who have a disease,' she adds." The Whacko Left can laugh about 'conspiracy theories' all they want to; but it should strike thinking persons as rather peculiar that so many of these projects, ostensibly for the benefit of all humanity, are shrouded in secrecy and generally treated like military weapons-development projects.

The Regime has promised to elevate our loosely federated science bureaucracies to a Cabinet-level position, and to that end, elevated Dr. Eric Lander to the post of National Science Advisor. Lander is a long-time Deep-State spook: affiliated with Jeffery Epstein and the latter's donations to bioengineering and transhumanism at MIT's Broad Institute. He formerly served on Obama's staff and was involved with the Human Genome Project. BTW, 45 of 50 Republican Senators voted to confirm Lander, despite knowing who and what he is; and what he's liable to be doing.

If one reads through the typical 'conservative' news site, we rarely encounter stories like these. Oh yes, we'll hear much outrage over what those Libtards are doing to our country, but it's not often that it's noted that the Republican Party, for the most part, is wholly going along with all of it. It should have been apparent what this party really stood for when it failed to support our legitimate President and not only allowed, but actively participated in, the Putsch which elevated the Regime to power. This is why I advocate often that we---who actually believe in Conservative values---should disregard any of this talk about upcoming elections and get it through our heads that we are living under an embryonic---but soon to be fully-blown---dictatorship. Forget 2022---it's not going to happen. Not to say that recent Republican majorities did anything anyway; but the Elites simply don't need even a token opposition any more.