WEF PIRATES CALL FOR CONTROL OF THE SEAS

So, it seems that the Junta's emissaries to China met with a rather embarrassing reception in Beijing last week. Given the sexual orientation of many of the Junta's members, we're not sure at this point how many of them went back for a second test. Ah---the whole incident brings back memories of the Obama days. 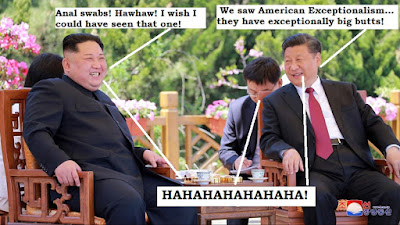 On the subject of swabs, the pirates at the World Economic Forum are at it again. Not satisfied with seizing the United States, Klaus Schwab and his merry-men have set their larcenous sights upon stealing the world's oceans. At Davos recently, they've decided upon a new plan to bring this about. Some academic pinhead associated with the University of California at Santa Barbara and a stooge of Tech/Media Oligarch Marc Benioff,  has given the world a 10-point program.

1. Freeze the warming. Stopping climate change is the hardest but most important step we can take for ocean health. It is good news to have the US back in the Paris Agreement.

2. Walk the talk. We need to make these carbon neutrality commitments real. This will require massive new investment in renewable energy sources, including some more experimental solutions (such as fusion), plus potentially looking with open minds into making older low-carbon energy solutions safer and more viable (such as traditional nuclear). We need to fast-track the development of sustainable low-emission batteries to store this energy intelligently across our grids. This includes major needs for marine energy infrastructure. A future, for example, with electrified ports and low-emission ships would help eliminate the epidemic of deafening ocean noise, address environmental injustices associated with pollution in ports, make oil spills a thing of the past, and significantly reduce oil spills.

4. 30 x 30. Parks protect some of our most important chunks of nature on land – our Yellowstones and Serengetis. We are vastly behind setting up parks in the sea. We need to follow through on calls to protect 30% of our oceans by 2030.

5. The other 70%. An ocean industrial revolution is beginning. Human industry is growing at exponential rates in the sea. Even if we succeed in protecting 30% of the ocean, we must still intelligently zone and manage this accelerated anthropogenic growth in the majority of our unprotected ocean.

6. Big cracks in the sea. Most of the ocean belongs to us all. This includes the two-thirds of the ocean in the high seas that lies beyond all nations’ ocean borders and the marine regions surrounding Antarctica. Protection of biodiversity and equitable sharing of resources has slipped through antiquated governance gaps in these international ocean spaces.

7. End plastic pollution. Plastic pollution is the ocean’s new cancer. We need to ban unnecessary plastics and tax other single use plastics, finally making them valuable materials we want to recover and helping to pay for the full cost of their environmental impacts. We need research and tech to prevent plastics from leaking into the sea, to overhaul our recycling systems, and to design economically viable alternatives to plastics.

8. Land. We can help the ocean by first setting a few things right on land...Precision agriculture that optimizes fertilizer use, coupled with other farming reform practices can help.

9. Wired ocean. We need more ocean data. This includes new tech to detect illegal fishing and connect sustainable fishers to consumers. We need tech to help endangered wildlife co-exist with ocean industry and fleets of environmental sensors above and below the water to better study our rapidly changing ocean.

10. Ocean equity. To build a healthy ocean, we must ensure all people have a fair stake in its success and that they are no longer unevenly harmed by ocean health risks. The fate of the ocean will affect people in all communities. Thus, we need people from all communities in ocean science, management, and policy.

It needs to be stressed, of course, that nobody elected this dork or his bosses, Schwab and Benioff, to do anything. The arrogance and hubris of these WEF slime is truly amazing. He admits in #9 that the oceans need further research to understand how they operate---and spends nine more paragraphs telling us how experts like himself should be dictators over the seas and how they're used.

The WEF Oligarchs have been asserting---with no proof whatsoever---that "unless we act now, the oceans could become extinct in x-number of years!" They are especially obsessed with plastic waste, which they imagine will destroy all marine life. All of their predictions of imminent ecological disaster have been proven hoaxes for the last 50 years, but this doesn't stop anybody from falling for the new ones.

All of these proposals---just coincidentally we're sure---would redound to great profit for agribusiness and shipping monopolies. Especially the part about blockading 30% of the entire waterways and heavily regulating the other 70%. It should be obvious even to NPC's who believe all of this 'green' nonsense that only the big port controllers and fisheries will be allowed to operate within these zones. Not to mention the smuggling and human-trafficking operations these same Elites are widely believed to conduct on the side.

The author of these proposals is one Douglas McCauley, a professor of Marine Biology at UCSB. He was formerly a bureaucrat in Obama's National Fish and Wildlife Service. After only two years there---and barely longer out of graduating with a Ph.D---McCauley suddenly found himself a cause celebre in Academia, Inc.. Within just three years, between 2011-2014, he was on the lecture circuit at UC Berkeley, Stanford, and Princeton. In 2014, he landed a professorship at UCSB. Then, in 2016, Tech oligarch Marc Benioff dropped a fat payoff donation in McCauley's lap---which he subsequently used to establish the Benioff Ocean Initiative.

Aside from the obvious Conflict of Interest here, anyone familiar with the internal machinations of postmodern Academia has to arch their eyebrows a bit at McCauley's meteoric rise. It's not that unusual for a Ph.D to graduate and get a position with the U.S. Government. It is however a bit phenomenal to climb from there to heading a fully-funded department and getting 85 articles published; along with hobnobbing with high officials at the U.N. and WEF in less than 10 years---especially for a White male these days. Something about McCauley's rapid promotion (in spite of his obvious incompetence) smells fishy; and not just because we're near the ocean.

When we look at the Board of Directors of the Benioff Ocean Initiative, whose website somewhat revealingly reads ,"Tell us what’s broken in your ocean. Ideas welcome from anyone, anywhere.We get the best minds in marine biology to solve your problem.We put down a million dollars to make the solution real," we find scattered among the usual crop of academic parasites a few names with financial connections.

One of these is Lynne Benioff, Marc's domestic partner.

The Benioff Family has an estimated net worth of around $9 billion. They own Big Media fake-news outlet, Time Magazine, and the Big Tech conglomerate Salesforce. Marc Benioff himself is a fanatical devotee of Klaus Schwab and was a featured star at the WEF's infamous Great Reset Forum. He currently holds a position on the WEF's Board of Trustees.

Though born Jewish, the Benioffs claim their spiritual inspiration comes from crackpot Indian guru Mata Amritananamayi. Politically, the Benioffs are solidly with the Whacko Left. Benioff led attempted Big Tech boycotts of states opposing homo 'marriage', and gave millions to fund the anti-2nd Amendment March for Our Lives. According to Open Secrets, the Benioffs are major donors to the DNC. Salesforce spends about $2-3 annually on 22 Beltway lobbyists; 19 of whom are revolving-door former federal officials.

Robert Bradley is another name which turns up. 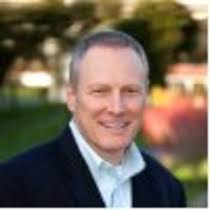 According to his online C.V., "Robert Bradley is currently retired. Prior to retirement, Mr. Bradley spent 30 years handling the tax, investment and financial matters for wealthy families." That should almost be enough to raise 'red flags' right there; however we read that, "Most recently, he was the Chief Executive Officer of Ekahi Aloha LLC, a single-family office headquartered in the San Francisco bay area. Prior to his work at Ekahi Aloha LLC, Mr. Bradley was the Chief Operating Officer for Skywalker Properties Ltd LLC, a commercial real estate company based in San Francisco...Mr. Bradley serves on the Advisory Boards for the Smithsonian Tropical Research Institute and the Benioff Ocean Initiative."

Skywalker Properties manages the 3,000-acre Skywalker Ranch, owned by Hollywood big-shot George Lucas. The property is closed to the public, but according to Wikipedia, "The Ranch contains a barn with animals, vineyards, a garden with fruits and vegetables used in the on-site restaurant, an outdoor swimming pool and fitness center with racquetball courts, the man-made "Ewok Lake", a hilltop observatory, a 300-seat theater called "The Stag" as well as theater screening rooms, and parking that is mostly concealed underground to preserve the natural landscape. The Main House has a company research library under a stained-glass dome. Skywalker Ranch has its own fire station. Skywalker Ranch is intended to be more of a "filmmaker's retreat" than a headquarters for Lucas's business operations." An archetypical Left-Wing Hollywood whacko, Lucas also runs a philanthropic front called The George Lucas Educational Foundation, of which Robert Bradley is a Board Member. Lucas' actual corporate headquarters are at the Letterman Digital Arts Center, a 17-acre campus in San Francisco's Presidio District. Skywalker Properties manages that, too.

Ekahi Aloha is a financial services company of which the Benioffs are a client. Marc Benioff is said to have an interest in all things Hawaiian, and even bought a five-acre estate there. In 2006, he began construction on a huge mansion on Hawaii's largest island.

Wait a second---wasn't Douglas McCauley, the head of the UCSB marine institute a federal official in Hawaii about that time? Isn't it a strange coincidence how all of these people keep turning up in the same places?

Though not directly represented on the Marine Institute's Board (that we know of), the once venerable and now disgustingly politically-correct Coca-Cola Company recently dropped another cool $11 million into McCauley's racket institute.

With this much Corporate Cash flowing in from Left-Wing donors with both financial and political incentives, does anyone seriously believe that McCauley is conducting unbiased and objective research? The Conflicts of Interest apparent here are so blatant that any attempt to turn over any regulation of the World's seas to this group must be opposed categorically.

Unfortunately, the United States has no leadership willing to stand up to the WEF crooks. We did, but it was Orange Man Bad among the Ameroboobs, and now we have a Junta utterly subservient to the WEF agenda. It's going to be up to other world leaders to protect the sovereignty of the world's oceans from now on.