PURITANS GETTING BENT AND KIDS' MINDS GETTING WARPED

Last night was a major media event across the Prozac Nation. The Whacko Left Wing staged the Golden Globe Awards to keep up the illusion that there is still talent in Hollywood. The last legitimate U.S. President spoke at CPAC to hordes who claim to support him after standing by and letting the Election be stolen.
On a more important subject, blogger Insanity Bytes posted a pair of articles detailing the kinds of institutionalized child abuse going in some 'Conservative' parts of the West Coast. Our frontline heroes in the public schools are circulating some further incendiary literature:

I'm fairly certain that autoeroticism is something that most teenagers can figure out without any input from the perverts at Jefferson County Public Health; but that's beside the point here. There are a few other rather crude sexual practices explicitly being described; and it is noteworthy that the very Politically-Correct authors made certain not to imply that heterosexual acts were not exclusively being done. Whether the scum who produced this circular will admit this or not, this 'public service message' is really designed to introduce young people some of these strange sexual practices, while at the same time implying that they are perfectly normal; and that everybody is doing them.
Sexuality is---or is supposed to be---a private matter. It's not civilized behavior for men to behave like cattle and simply jump on the first object of their desire in front of the whole herd. Nor is it civilized to broadcast perverted sexual imagery for everyone to peep at. Things like public indecency and voyeurism were outlawed by dead White males a long time ago. The Romans instituted laws against excessive grooming, which evolved into Statutory Rape laws. In other words, they set the precedent for protecting families as the sole sexual educators of their own offspring.
In our Postmodern dystopia, however, our young people are caught between the cross-currents of rampant paedohysteria and encouragement of unbridled licentiousness. In fact, that is reflected in our culture at large. America is simultaneously the most sex-negative and the most sex-obsessed society in the West. Here a man can lose his job for flirting with a co-worker while deviants of the lowest order can stage Pride Parades in front of small children. The impression that these contradictions and hypocrisy imparts upon children's minds is that heterosexuality is something dangerous and predatory; while sexual deviance is true love, or at least a lot of fun.
We didn't sink to this level culturally overnight. But at some point in the recent past, Ameroboobs with families decided to abdicate the sexual education of their offspring to the Schools and Social Workers. Americans today hate being stressed with such delicate tasks. And so, they sat on their hands and allowed the Whacko Left Wing take over child-rearing duties. So-called 'Conservatives' know what is happening, but they go along with it anyway. IB writes that: "There was a tiny bit of pushback, a smattering of people have been writing letters, objecting, bringing it up at the commissioners meetings, but they’ve just doubled down, they made statements that they fully support this stuff and have no intention of having any sort of dialog or addressing anyone’s concerns."
Why should they care? When did any 'Conservative' in Oregon start demanding investigations into radicalization of their public schools? Was there ever any talk from Conservative politicians about why we kept funding these sewers? Seriously: can anyone name one political figure since Reagan who even made educational reform an issue?

Homeschooling is legal in Oregon; in fact the laws are not nearly as repressive as many other states. Conservatives chatter about the 'virtues of home schooling' all the time: yet out of an estimated 600,000 students in Oregon, only about 22,000 are homeschooled (about 3%).
So why is anybody surprised by what Jefferson County is doing? What did 'Conservatives' think was going to happen? It's not like Conservatives are a minority in Jefferson County: 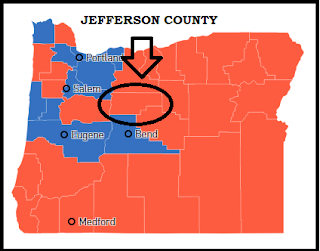 President Trump won the county by a margin of 26% in 2020. Yet, aside from voting for Conservatives, it doesn't appear that the Right takes any other involvement in society; since the Whacko Left Wing freely runs over them.
I hate to seem indifferent to such a serious issue; but I've also experienced decades of indifference when warning people that it would come to this (and BTW, it's going to get worse). While I certainly applaud the efforts of bloggers like Insanity Bytes and Citizen Tom for exposing and protesting these crimes against our school-age children; I happen to know that both of these writers are grandparents. It strikes me as very telling that actual parents don't seem to be involved in any of this outcry. While I am in the parental-age bracket, I don't have children; but when I do, the little ones will never darken the door of a public school and that's something I've believed for years. (I've actually told women I've been in relationships with that that point is non-negotiable). But those parents with kids: where are they?
Here's a tidbit from the U.S. Census Bureau: "In 1960, the proportion of children living in mother-only families was eight percent, but by 1996 that proportion had tripled, to 24 percent. Since then, it has fluctuated between 22 and 24 percent, and was at 23 percent in 2015. Between 1990 and 2015, the share of children living in father-only families has fluctuated between three and five percent, and was at four percent in 2015." So, in about 30% of families today, one parent is trying to do the work of two. 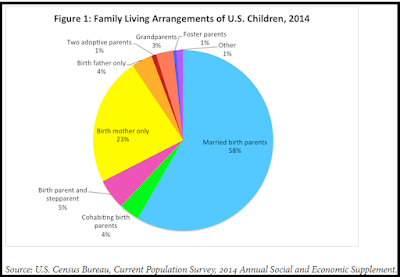 Barely one-half of American families are 'traditional.' That's still a majority, however---enough to bring out-of-control schools and social workers to heel. But they haven't done a thing.
The bottom line here is that this only going to stop when parents decide to get off the couch and stop it. But sadly, that seems unlikely to happen because most Conservatives simply no longer have the will to resist.