There was a story that went viral this week about a Republican Congressman who stood up and read a passage from the Bible. Whacko Left-Wing Congressman Jerrold Nadler---a 15-term incumbent and totally on the hook to law firms and Big Media--- lost it and screamed, "what any religious tradition describes as God’s will is no concern of this Congress!”

Nadler represents a heavily Jewish District in New York; and the potential unintended consequences of bashing the Jews while he really was venting on Christians sent Corporate Media so-called 'fact-checkers' scrambling. In fairness, Nadler probably has no more respect for the Jewish faith than he has for the Christian one; and actually I somewhat agree with him. Our Congress hasn't cared much about God's Will for a long time; and really is about the last place anybody should look for moral and upstanding citizens.

The Corporate Media itself has been on anti-religious streak (moreso than usual) lately. What occasioned this latest round of Leftist outrage was because Pope Francis refused once again to cave into political/financial pressure and bless homo 'marriage' as legitimate. "God cannot bless sin," the Pope said.

If there's one thing Liberals can't stand, it's being told 'no'---even if God says it. The ridiculous NPC-baiting show The View, invited CNN's Don Lemon to respond to the Pope. Why anybody thinks that Lemon would know anything about Biblical Ethics is beyond me; but we are talking about an audience that typically believes that anyone who gets on television is an expert. 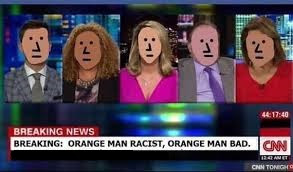 "If you believe something that hurts another person, or does not give someone the same rights or freedoms... I think that this is wrong, and I think that the Catholic Church and many other churches really need to re-examine themselves and their teachings. Because that is not what God is about. God is not about hindering people or even judging people."

There is some Liberal hubris at its finest. This little homo nobody is telling the Pope and the whole Christian leadership "what God is really all about," and how they "need to re-examine themselves" (i.e. repent). What's especially hypocritical is that these are the same yahoos who are always lecturing us little people on how we should trust the experts. Doubt the Scam-demic or the Climate Change Hoax and these types are the first in everyone's faces screaming that all of the experts say so!

So what exactly is Don Lemon's theological expertise? Pope Francis holds five doctoral degrees on the subject. I would think that that would qualify Francis as an expert on religion: but not these intellectually superior beings at CNN. In fact, even Lemon's qualifications as a journalist are fairly thin. Even the Columbia Journalism Review thinks he's a fool. Lemon nearly flunked out of Louisiana State and transferred to the more 'woke' Brooklyn College. He had a mediocre career in broadcasting until CNN decided they needed a homo Black man for virtue-signalling purposes. Now 55 years old, Lemon lives with his boyfriend in apartment. That's what the Corporate Media thinks should be giving the Church instructions on how to behave.

"If you believe something that hurts another person or does not give someone the same rights and freedoms as others, I believe this wrong." Aside from the fact that Liberals never actually practice this themselves; the statement is just foolish. Literally taken, this would infer that Evil does not exist. Lemon reinforces that idea by saying that "God is not about hindering people or even judging people."

"I think that religion and the pew are barriers that keep people from getting to know each other." Lemon continued, "So I would say to the Pope and the Vatican to go out and meet people, try and understand people; and do what the Bible and Jesus actually teaches which is to love your fellow-man and to judge not lest ye be judged."

Very well; so if Lemon is accusing the Church of bigotry isn't he passing judgment? So far, he hasn't set up any moral criterion by which the Church is wrong, other than quoting one Biblical passage out of context. If God is against judging people, how is Lemon justified in judging the Church? By the same token, if the Church does judge people unfairly, by Lemon's logic, God doesn't care anyway.

What Lemon and other Liberals fail to understand is that the Church doesn't 'judge' anybody---in the sense which Lemon means it: the Church follows Christ's command to lead the world to repentance and salvation. This isn't accomplished by simply accepting everybody's behavior with no regard to morality; it's done by educating others to live lives pleasing to God. The Catechism explains as follows:

"Conscience must be informed and moral judgment enlightened. A well-formed conscience is upright and truthful. It formulates its judgments according to reason, in conformity with the true good willed by the wisdom of the Creator. The education of conscience is indispensable for human beings who are subjected to negative influences and tempted by sin to prefer their own judgment and to reject authoritative teachings...Ministries should be exercised in a spirit of fraternal service and dedication to the Church, in the name of the Lord. At the same time the conscience of each person should avoid confining itself to individualistic considerations in its moral judgments of the person's own acts. As far as possible conscience should take account of the good of all, as expressed in the moral law, natural and revealed, and consequently in the law of the Church and in the authoritative teaching of the Magisterium on moral questions. Personal conscience and reason should not be set in opposition to the moral law or the Magisterium of the Church."

In other words, moral teachings are for the good of all; and the selfishness and stubbornness of those who oppose them don't invalidate them. We are further informed that:

"A morally good act requires the goodness of the object, of the end, and of the circumstances together. An evil end corrupts the action, even if the object is good in itself (such as praying and fasting "in order to be seen by men"). The object of the choice can by itself vitiate an act in its entirety. There are some concrete acts - such as fornication - that it is always wrong to choose, because choosing them entails a disorder of the will, that is, a moral evil. It is therefore an error to judge the morality of human acts by considering only the intention that inspires them or the circumstances (environment, social pressure, duress or emergency, etc.) which supply their context. There are acts which, in and of themselves, independently of circumstances and intentions, are always gravely illicit by reason of their object; such as blasphemy and perjury, murder and adultery. One may not do evil so that good may result from it."

If Lemon had paid more attention to what the Church actually teaches; he'd have understood that religion doesn't stand as "a barrier keeping us from knowing each other," but as barrier between Civilization and what would destroy it. As typical of most Liberals, Lemon is the real bigot, not the Pope. His whole argument is premised in the belief that Christians are motivated by hate and hypocrisy. Therefore, it's not unreasonable to him that Christians need merely change their attitudes and become more accepting. If he were more open-minded and accepting himself, he might see that what keeps him from God is his own selfishness and self-righteousness.

It's noteworthy that the Catechism, echoing the words of St. Paul, notes that: "If man commits evil, the just judgment of conscience can remain within him as the witness to the universal truth of the good, at the same time as the evil of his particular choice." Liberals like Lemon are notorious for displaying this behavior, though they never admit it. Why are they so obsessed with getting Christians to accept what they do, or their assent to their beliefs? If they don't believe in God, or care what He thinks, why don't they just go about their business and ignore us?

The truth is that they cannot. They can't rest content because their instincts demand God's approval, but they want it on their own terms. Lemon and others like him are actually seeking validation and acceptance for their sinful behavior. It's not an act of Christian Love to give them that validation. "The verdict of the judgment of conscience remains a pledge of hope and mercy. In attesting to the fault committed, it calls to mind the forgiveness that must be asked, the good that must still be practiced, and the virtue that must be constantly cultivated with the grace of God." So far from Lemon's assertion that God doesn't judge us; He has given us a natural mechanism by which we judge ourselves. Validating or accepting their behavior hinders their ability to change for the better.

Our culture spiritually cripples people in the same way. In the not-too-distant past, Lemon would have been little more than the 'office fag'; shunned by everybody and probably not given any positions of great responsibility. He could have gotten psychological help for his sexual disorder and gone on to be a productive member of society. But instead, he's elevated to a position where he's not only out of his depth professionally; but actually put there precisely because of his sexual dysfunction. Undeserved wealth and power: that is one mechanism by which Satan enslaves people to sin. In our culture today, coming out as openly gay removes many barriers to power, fame, and fortune; while more competent and moral people are shoved aside.

That's the real 'barrier' in our culture today: between Good and Evil. What the Left desires is Evil under the facade of 'unity'. The Right needs to face this fact like Pope Francis did, and stop trying to pretend that Evil doesn't exist.