So there has been another social firestorm erupting in both America and Australia recently. No, it isn't because of tyrannical acts perpetrated under the Scam-demic; or on account of the millions of people ruined, displaced, or killed during the past year. It isn't even because of the blatant trampling of human rights perpetrated under now year-long temporary emergency powers. The Anglosphere long ago collectively gave up any concern for the Rights of Man or empathy for one's neighbor. Instead, it's Sexual Misconduct Season! 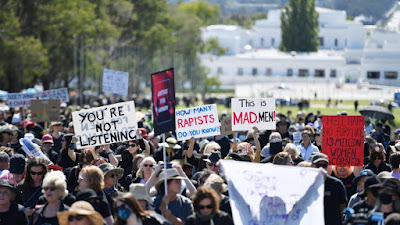 New York Governor Andrew Cuomo and Australian Attorney-General Christian Porter have been a pair of the most atrocious despots of our recent Color Revolution in the West. With all of that power came inflated egos. Both of these characters got big heads and thought that they could challenge the people who gave them that power. In December, Cuomo signed off on leading an anti-trust lawsuit against Facebook; while in September, Porter backed a law prohibiting Big Tech from manipulating news stories. The law actually passed; requiring Zuckerberg and Schmidt to get a bailout from fellow-Oligarch Rupert Murdoch. Now it's payback time. Right on cue, the allegations started coming out; new accusers come forward on a daily basis; and Angloboob outrage explodes.

Granted, I do believe that both Cuomo and Porter should be put on trial and afterwards sent to a firing-squad. But that's for committing crimes like Treason, Conspiracy, Corruption, Murder, and Crimes Against Humanity---not because they allegedly acted like a couple of cads. 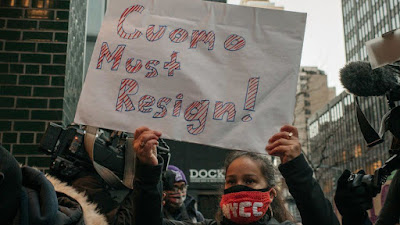 In our postmodern dystopia, however, being accused of Sexual Misconduct is the worst thing that anyone can be accused of. Nobody ever has defined what 'sexual misconduct' actually means; but these days, nobody wants to split hairs over things like that. We live in an era, after when burning churches and courthouses and setting up 'autonomous zones' are considered 'peaceful protests' while demonstrators who read from the Bible while eating pizza are accused of insurrection. The same society where photographs of boxes of fake ballots are considered baseless claims of voter fraud while a flu outbreak is believed to have amassed more casualties than our last five major wars combined though there is no proof that it has whatsoever.  The same society that votes for politicians who scream about exploitation while demanding that we turn absolute power over to Oligarchs who presumably alone can solve all of our problems.

The degenerate Anglosphere has this same schizophrenic attitude towards sexuality. We are one of the most sexually repressive and sexually obsessed cultures simultaneously. A businessman can lose his job for flirting with a female secretary; he can also lose it for saying anything critical about public schools hosting Drag Queen Story Hour. Major media figures are destroyed for having love-trysts with their groupies; but pole-dancing at the Grammy Awards and producing obscene music videos is perfectly socially acceptable. We saw lives destroyed at Penn State and Duke University over some locker-room horseplay and frat-boy shenanigans; yet it would be a brave mayor who dared cancel an annual Pride Parade because it was inappropriate for children to see. And so on.

This cancer erupted on our society with the disgraceful Senate Confirmation Hearings on Supreme Court Justice Clarence Thomas in 1991. That is where the term 'sexual harassment' was invented and became a New Normal.

The Corporate Media soon learned that 'sex scandals' sell. In reality, they'd always known that; but before the Thomas Hearings the Media had to find scandals that actually were serious and had some basis in fact. After the Thomas Hearings, they learned that they could manufacture scandals and accuse people on rumor and hearsay. Thomas was eventually confirmed, but a few other uppity Negroes like O.J. Simpson, Mike Tyson, Kobe Bryant, and Bill Cosby weren't so fortunate.

When the Clinton Co-Presidency assumed office in 1992, Hillary Clinton and her Lesbian friends declared a "gender war" which the Angloboobs, as per usual, uncritically swallowed. Instead of standing up to this depravity, the Right---also as per usual---adopted the same policy. I well recall former Republican Senator Robert Packwood coming into conflict with then-GOP leader Bob Dole over some resolution in which Packwood broke ranks with the Republicans. Shortly thereafter, Packwood found himself in the same boat as Thomas had been and was forced to resign. That formed the dangerous precedent of men losing positions for these kinds of allegations. Ultimately this hysteria resulted with the failed Impeachment of President Clinton. Passing over Clinton's other crimes like ordering the mass-murder of the Branch Davidians, or egregious acts of corruption, or abuses of the War Powers Act, the Republicans tried Clinton for doing what thousands of American men routinely do: he had an extra-marital affair and lied about it when he got caught. Despite Clinton's acquittal, the witch-hunts have continued unabated down to the present day. 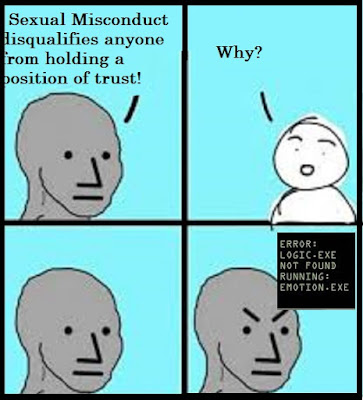 How did we get to this level of irrationality? Well, we are talking about convincing people who already believe that wearing a cotton face-cloths actually stop viruses or think that driving cars causes bad weather. Deceiving Angloboobs and fanning them into outbreaks of mass-hysteria is really not an especially difficult task.

But that aside, there are two main reasons why sexual witch-hunting has become a New Normal. The first is that it is driven by Envy. Women are naturally attracted to powerful/popular men; and some men, in turn, take advantage of that situation. That arouses a lot of jealousy upon some of the less-gifted populace. It especially arouses the fury of homosexuals---and the U.S. Government and Media are full of them. Hillary Clinton is a great example of this kind of jealous fury. An obvious Lesbian, Hillary was enraged that her husband was a 'chick magnet' but desirable women ignored her sexually. (Don't ask me; I don't know what they see in him either, but Bill Clinton admittedly has an attraction factor most men would love to have). This jealous fury has led Hillary with an obsession to level the sexual playing-field through political means.

The second reason that witch-hunting has continued is because it has weaponized sexuality. It has become the perfect tool for anybody---from high-level Corporate Oligarchs down to the passive-aggressive sniveling little government bureaucrat---to destroy anybody they don't want in their way any longer. Why give up what works?

And there we have the reality behind postmodern sexual politics. Originating in a sleazy political circus; driven by psychosexual neurotics; promoted by the Media for ratings; and sustained by jealousy and opportunism---the English-speaking world should blush with shame every time stories like these come out. Fortunately for the witch-hunters, though, our society long ago lost any sense of self-respect.

It never used to be like this. Sexuality was always considered a personal and private matter: not something to be displayed and dragged into daylight for public voyeurism. The Church---contrary to popular contemporary belief---never even considered natural sexual attraction a sin.*(see note below) St. Thomas Aquinas wrote: "St. John of Damascus said that sin exists because persons turn themselves from nature to what is contrary to nature. And so we hold that sin is contrary to nature. But sexual desire is natural, for nature has taught every animal to desire. Therefore, sexual desire is not original sin." Of course, there are limits on how this desire should be acted upon, both by religion and civilization. Being a cad like Cuomo and Porter had consequences then too.

Worst of all though is that this petty obsession with sexuality distracts from real, very serious, and less personal issues. For example, does anyone really believe that Jeffery Epstein ran his operation in the Virgin Islands strictly for entertainment purposes? Besides Bill Clinton himself, Epstein's frequent visitors included Ehud Barak, former head of the Mossad. Epstein was a huge investor in Israeli tech firms building domestic spying technology. One of his major fund investors was Les Wexner, another billionaire with ties to the Mossad. Wexner was a supporter of RINO Romney and left the GOP in 2018, to "distance himself from Trumpism."

With all the horror "OMG! Older men having sex with younger women! And some were legal minors! Outrage! Horror!" no one notices that Epstein was a huge supporter of the Great Reset/NWO policies. Not only did he meet with WEF leader Prince Charles' brother, Andrew: he had deep ties to our current financial Oligarchs, like Bill Gates, Mark Zuckerberg, Reid Hoffmann, Eric Schmidt, George Soros, and more, including WEF scum from the Arab Royalty. 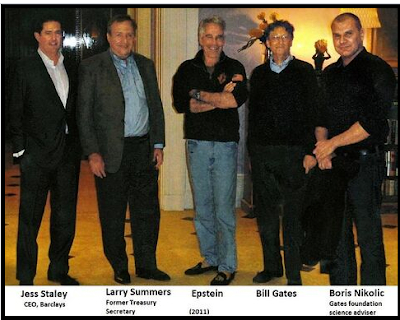 Epstein, like his friend Gates, was deeply committed to eugenics, and founded Harvard University's Program for Evolutionary Dynamics. Everybody focuses on the lurid details of Epstein's sexual practices while his real crimes (and those of his accomplices) go unnoticed.

The same is true now in both the Cuomo and Porter cases. The thousands killed in Cuomo's nursing-homes, the scores of thousands impoverished by the Scam-demic 'emergency orders', the people driven to depression and suicide, their corruption and subservience to financial oligarchs---just ignore that, we're told---and fly into uncontrolled rage because somebody acted like a cad. It's just none of our business. What they did elsewhere, that is what we should focus on. But until Anglospherians stop treating the world scene like one big Reality TV Show, the real criminals will keep getting away with their crimes while the underlings get sacrificed for absolutely nothing.

Note: some Manosphere Red Pills claim that Christianity is hostile to sexuality, and quote Christ's saying from the Sermon on the Mount that: "everyone who looks on a woman to lust after her has already committed adultery with her in his heart." It is obvious from the context---both in Greek and English---that Jesus is referring to lusting after another man's wife. How can one commit adultery, unless one or both parties are married? The passage they quote is in the middle of a paragraph concerning adultery and divorce.