DISNEY: A SPECIMEN OF 'WOKE' SUBSERVIENCE

So, it appears that the idiots running the Disney Corporation---people who believe that homosexual love-scenes are suitable viewing for children---have decided to ban several classic features on the pretext that they are somehow 'offensive.' Children under 7 years cannot access these programs on Disney Plus without parental consent: though the rest of the filth that Disney produces is fair game for the young ones. A warning comes up before the film stating that: "This program includes negative depictions and/or mistreatment of people or cultures. These stereotypes were wrong then and are wrong now. Rather than remove this content, we want to acknowledge its harmful impact, learn from it and spark conversation to create a more inclusive future together. Disney is committed to creating stories with inspirational and aspirational themes that reflect the rich diversity of the human experience around the globe."

Once again, the hubris and arrogance of these Corporate Elites is displayed moreso than anything else. It's not enough for these jerks to produce and distribute children's material; they take it upon themselves to lecture us little people on its suitability for viewing. Maybe if Disney spent more time producing quality films, they wouldn't have to worry about our choices in viewing so much. The executives behind the Disney decision illustrates the sort of degenerates with which we're dealing. A high percentage of their Board are there for the purposes of 'enforcing diversity' and other such nonsense. Quite a few of them, too are focused upon investor relations, which is also noteworthy.

Like most of the rest of Big Media, Disney's wires are pulled by bigger interests. Behind their smug posturing, most media executives are---like our current political leadership---merely the slavish pawns and toadies of vested interests more powerful than themselves. The top 10 investors (i.e. owners) of Disney are: 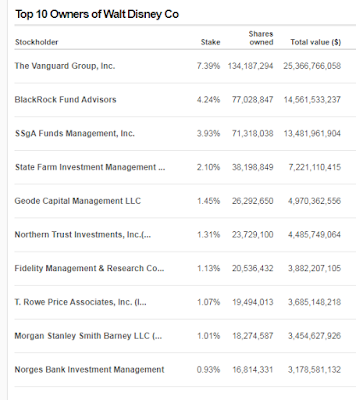 Surprise, surprise! Vanguard, Blackrock, and State Street: the 'Big Three' index funds---and all cheerful supporters of the Great Reset---have about 1/5 of Disney's pie. Actually, if we go further down the list, George Soros' name turns up too.

We've run into the scum at Vanguard before here; as well as the loathsome Great Reset crackpot Larry Fink of Blackrock. Fink, we might recall, openly bragged about the financial pressure that Blackrock laid upon companies to obey his Great Reset schemes. He's certainly not alone among this gang. Michael Tipsord of State Farm, for example, also serves on the Board of the Deep State Brookings Institution. Brookings' major funders, incidentally, are Bill Gates, George Soros, the never-Trump RINO Koch Brothers, PepsiCo, Ebay, and the Qatari Royal Family. Tipsord was an attendee at the Davos WEF Forum in 2020 which launched the Great Reset. In an interview with WGLT public radio, Tipsord said:

"Particularly useful was the theme of the last World Economic Forum in Davos Swizerland; 'the fourth industrial revolution.' It's being sparked by the convergence of multiple technologies such as global hyper connectivity, three-d printing, machine learning AI, medical and wearable tech, the internet of things, and advanced sensor tech. And one of the things I took away from this one in particular was the cognitive computing capabilities that are coming and the displacement of work in a different way than what it has been in the past...the next set of macro trends: urbanization, the shared and sharing economy, changing demographics and notions of family, and renting versus owning, all complicate analysis."

What would anyone suppose that Disney would produce under this kind of influence? Honorable leaders? Disney openly admits that it's fully behind the WEF's 2030 Agenda. In fact, Abigail Disney---heir to the Walt Disney fortune---is a WEF member, and the former head of Euro Disney was a WEF CEO.

As loyal stooges of the Global Elite, Disney also extends its masters' ideology into the political realm. According to OpenSecrets, Disney spends around $4.6 million on 32 Beltway lobbyists, 29 of whom are revolving-door former Federal bureaucrats. Incidentally, eight of our so-called 'Representatives' have over $100,000 in Disney stocks themselves. Notice who is far and away at the top of the list: 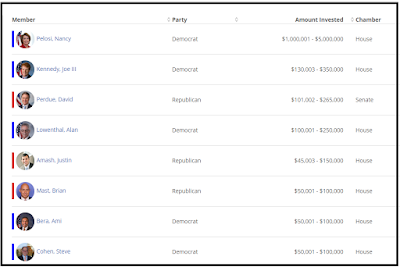 Also, too, it's noteworthy that three of those eight folks are Republicans who don't let their Conservative values get in the way of their financial investments. I strongly suspect that Disney Plus' 100-million member subscription base and that their current $195/share stock-market price isn't all the handiwork of Liberal Democrats either. So I think it best that we take any more Conservative outrage over Disney's corrosive social policies with a large grain of salt.

Meanwhile, Disney will go on: shoving its 'woke agenda' on the children and acting as a propaganda arm for the WEF. And, as usual, Conservatives will stand idly by and let it all happen.