So we begin the New Year under the shadows here in the now-moribund United States of America. A photo of the New Years' celebration tells volumes about how the future is starting out:

This shouldn't surprise anybody: China's been back open for business and back to normal since Summer. That was when the Ameroboobs were setting up CHAZ zones, burning out commercial districts, and beheading statues of Jesus. Mask mandates were coming into vogue here, too: although the Chinese were then repealing mask orders. As early as late February, China's top influenza specialist, Dr. Zhong Nanshan, correctly predicted that the outbreak would peak by March. He also pointed out that COVID-19 was of such a nature that it not likely survive the Summer; that Western propaganda about vaccines was a chimera; and that new outbreaks of the virus were progressively weaker.

The Corporate Media and the Color Revolutionists here in this country pay no attention to the authorities in China. Instead, they've been disseminating considerable anti-Chinese propaganda---mostly coming out of Soros-funded NGOs---accusing the Chinese of committing numerous atrocities to contain the virus. These are basically the same myths generated against any government that the Elites wish to vilify: their purpose in this case being to make our own repressive measures seem less extreme.

One thing that the Chinese did do however was to fan COVID hysteria in the West as much as possible. No Communist can ever resist the opportunity to foment disruption and panic in free societies. Sadly, in the United States these days creating mass hysteria requires very little effort. 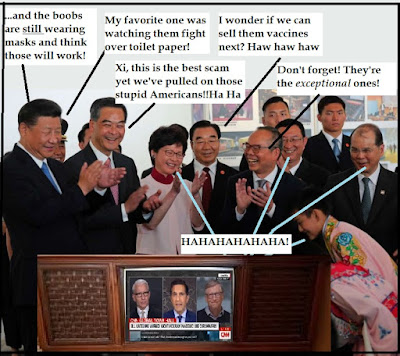 I didn't go to China for New Years', even though it looked like they were having a lot of fun. Instead, I journeyed to a secret location in a redoubt deep in the Cascade Mountains where we wined and dined in complete privacy. At one point, some of us gentlemen withdrew to the smoking lounge and there was an episode of the 1960s espionage series The Man from U.N.C.L.E on the television. Interesting to see how far we've evolved in just one generation. It used to be that wealthy megalomaniacs who hired teams of mad scientists with plans of world domination were considered villains. Now, of course, they're considered world benefactors. These kinds of Oligarchs have learned the same lesson over time that the Red Chinese have: conquering the West isn't as easy as simply buying it out.

Joseph Biden, the Insurgency's figurehead, announced just before Christmas that Brian Deese---an operative at Blackrock Holdings---would be inserted into the administration as his top economic policy strategist. Deese will chair the National Economic Council (in name) and engineer policies favorable to High Finance (in reality). Deese's job at Blackrock was "focusing on identifying drivers of long-term return associated with environmental, social and governance issues." During Obama's term, Deese fleeced American taxpayers and enriched his corporate cronies with the 2009 auto-makers' bailout. Obama was so impressed by this that he gave Deese a position as Senior Advisor. Deese went on to help set up the Paris Climate Accord in 2015.

Blackrock Holdings is the largest financial cartel on Wall Street, and was the conglomerate that paid for both of the recent Stimulus bailouts. It's CEO---and Deese's and Biden's actual boss---is the appropriately-named Larry Fink. 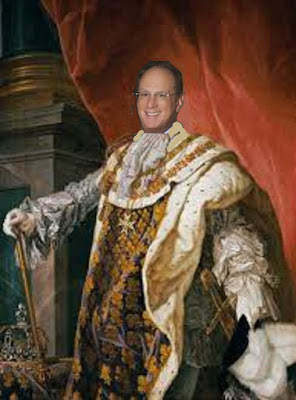 Fink and Blackrock control a low estimate of $7 trillion in assets, with $12 trillion as a high estimate. Either figure is higher than the annual GDP of every nation in the world except for the U.S. and China. In fact, the high estimate is more than the GDP of Germany, Britain, France, and Italy combined. And he's just one of the new ruling financial junta in the United States. So, Snowfalkes: do you still want to tell us that the New Order is about unity and equality?

There is plenty of unity in Crony Capitalism, however. Mitch McConnell's corporate overlord, Vanguard Holdings, holds about 8% of Blackrock stock. The Top 10 holdings Blackrock itself has are:

Larry Fink is not only a proponent of the Great Reset, he sits on the WEF's Board of Trustees and the WEF is packed with Blackrock operatives. 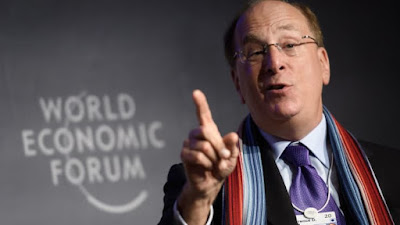 “Climate change has become a defining factor in companies’ long-term prospects … But awareness is rapidly changing, and I believe we are on the edge of a fundamental reshaping of finance.” Fink ominously prophesied at Davos last January. His views on the Climate Change scam are about fanatical as Bill Gates' views on the Scam-demic are. It is quite noteworthy that---for all of his rhetoric about 'free markets'---Fink comes across as a bit heavy-handed when it comes to imposing his kooky climatology upon others who may not agree. In a manifesto published on Blackrock's own website, he wrote:

"We believe that when a company is not effectively addressing a material issue, its directors should be held accountable. Last year BlackRock voted against or withheld votes from 4,800 directors at 2,700 different companies. Where we feel companies and boards are not producing effective sustainability disclosures or implementing frameworks for managing these issues, we will hold board members accountable." That's right: not toeing the PC party line on Climate Change could cost an executive a promotion or maybe even a job. BTW, how come we never heard a single objection from a Conservative political figure over this policy? I suspect that there are at least 7 trillion reasons why not.

"This year, we are asking the companies that we invest in on behalf of our clients to: (1) publish a disclosure in line with industry-specific SASB {the Sustainabilty Accounting Standards Board} guidelines by year-end, if you have not already done so, or disclose a similar set of data in a way that is relevant to your particular business; and (2) disclose climate-related risks in line with the TCFD’s {the Task Force on Climate-Related Financial Disclosures} recommendations, if you have not already done so. This should include your plan for operating under a scenario where the Paris Agreement’s goal of limiting global warming to less than two degrees is fully realized, as expressed by the TCFD guidelines. We will use these disclosures and our engagements to ascertain whether companies are properly managing and overseeing these risks within their business and adequately planning for the future. In the absence of robust disclosures, investors, including BlackRock, will increasingly conclude that companies are not adequately managing risk."

What an arrogant b-----d. Neither Blackrock, nor the Paris Accord, nor the two NGOs he cites have the slightest legal force in the United States. Not one American business is under any legal obligation to do any of this. But because of his financial power, Fink can impose his arbitrary will upon any firm without the resources to resist. Now that he and his confederates have taken over the U.S. Government, just imagine what he'll be doing. Remember that Fink & Co. hold trillions in government debt. He's got Biden by the throat and can order him around like he does his shareholders.

At this point, life under the Communist Chinese is starting to sound like a better option. They occasionally actually execute Oligarchs who start getting ideas about being more powerful than Xi and his Merry Men.

Under our (former) system of government we don't need to send guys like Fink to the firing squad---however emotionally satisfying and socially hygienic that would be. All it would have taken would have been to reinstate the securities and exchange laws that the Clintons repealed; prohibiting the Government from borrowing money from Corporate looters; and defending things like Right of Conscience in the workplace; enforcing anti-trust laws, etc. But none of that happened, and now we have these pigs pulling the wires on public policy. When the Insurgency finally falls, our successors will have to give some serious thought about how to build a legitimate Free Enterprise system back in place.