I think that we probably all have noticed by now that Satanism is in vogue in America's postmodern dystopia. The entertainment branch of the Corporate Media---which has no shortage of devil-worshipers within its ranks---has been promoting Satanism through television shows, movies, music, etc. for the last several years. Now, a Hollywood homosexual and some creepy 'artists' have created a limited-edition shoe style celebrating His Sooty Highness. They aren't shaped like cloven hooves (I think they'd actually be funny if they were); they're regular Nike Air Max 97 shoes modified with pentagrams and supposedly tainted with human blood. To their credit, Nike has distanced itself from the product and is reportedly preparing a lawsuit. Despite the hefty price tag, the Devil Shoe sold out in less than a minute. That's even faster than chicken sandwiches on Black Friday! 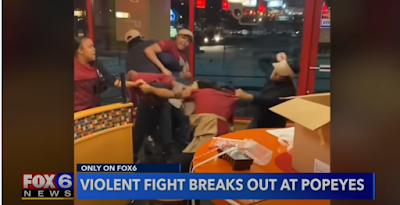 I don't think that anyone would deny at this point that Americans are among the most gullible and easily-manipulated people on the planet. What few people realize is how it's actually done. True, Satan is a deceiver and those cultural Elites promoting this stupidity are inspired by him. But there's also a science behind it all. As a writer on the Vigilant Citizen site summed it up a decade ago:

"In the past, when changes were imposed on populations, they would take to the streets, protest and even riot. The main reason for this clash was due to the fact that the change was clearly announced by the rulers and understood by the population. It was sudden and its effects could clearly be analyzed and evaluated. Today, when the elite needs a part of its agenda to be accepted by the public, it is done through desensitization. The agenda, which might go against the public best interests,  is slowly, gradually and repetitively introduced to the world through movies (by involving it within the plot), music videos (who make it cool and sexy) or the news (who present it as a solution to today’s problems). After several years of exposing the masses to a particular agenda, the elite openly presents the concept the world and, due to mental programming, it is greeted with general indifference and is passively accepted. This technique originates from psychotherapy."

More specifically, it is weaponized Psychotherapy. Like all science, Psychology is morally neutral regarding its techniques. Minds can be healed with Psychotherapy, but can be destroyed by the same knowledge in the wrong hands. (Just as atomic energy, for example, can produce clean and affordable power for everyone, it's misuse can wipe out civilization with a handful of nuclear bombs).

Edward Bernays---a relative of Sigmund Freud's---came to America and did exactly that. Now regarded as 'One of the 100 Most Influential Americans of the 20th Century', Bernays became one of the early proponents of the present Deep State and set the pattern VC describes above for manipulating the human mind on a mass-scale. As Everett Martin predicted in a 1933 essay, "When the future historian, an American Sallust or Tacitus, records the downfall of our Republic and its loss of liberties, he will point to the leading place that organized propaganda had in this unhappy business. Sallust tells us how such propagandist tricks as the Romans discovered---bread and circuses---brought about an unholy alliance between the passions of the mob and 'the enlightened few.' Tacitus tells us that when Augustus assumed divine attributes, and tyranny and persecution were later universal, these evils were possible because no one was able to protest. This is also the inevitable end of modern organized propaganda. Once we had an uncomplimentary term for such industry: we called it 'intrigue.' The ambitious few who destroyed the freedom of the Ancients won over the mob by making themselves visible. Today, as Mr. Bernays says, their successors are setting up an 'invisible government.'" Of course, today Sallust and Tacitus are only a couple of dead White males, but Martin's short article is worth a read because much of what he said then is wholly relevant today.

Supreme Court Justice Felix Frankfurter wrote to President Roosevelt shortly before WW2 that the proliferation of propagandists in public discourse were "professional poisoners of the public mind, exploiters of foolishness, fanaticism and self-interest." Karl von Weigand, a foreign correspondent for Hearst Newspapers described a 1933 meeting with Bernays where he told him of an encounter with Nazi Propaganda Minister Goebbels. "Goebbels had shown Weigand his propaganda library, the best Weigand had ever seen. Goebbels, said Weigand, was using my book 'Crystallizing Public Opinion' as a basis for his destructive campaign against the Jews of Germany." Bernays said that he was 'shocked' by that revelation, but it did nothing to change either his mind or his habits. He went on to sell his services to several post-War think-tanks and mass-media outlets which became the prototypes for the modern Deep State.

Today we've reached a point where drug abuse, dumbed-down schools, and mass-media have reduced the population to accept homo 'marriage', fake pandemics, stolen elections, and Satan-worship while still believing in American Exceptionalism. A handful of crony-capitalist Oligarchs dominate control of the Western radio, television, newspapers, and the Internet.

It's also a well-known fact that both homosexual culture and narcotics abuse have strong connections to the occult. It's interesting that St. Paul in Galatians v:20 mentions 'witchcraft' as one of the 'manifest sins of the flesh.' The Greek word is 'pharmakeia' which according to Greek/English dictionaries is defined as follows:

The connection between homosexuality and the occult is also well-known throughout history. Aleistar Crowley---himself a drug addict and known associate of post-WW2 think-tank activists---was the founder of modern-day occult movements among the Elite. According to his biographers, Crowley "was an active bisexual throughout his life, is notable for incorporating 'sex magick,' which involved sexual relations with both men and women, into his occult practices."

"Materially, Crowley took full benefit of his father's brewery fortune, and in 1895 entered Cambridge University. During this period Crowley had sexual relationships with both men and women. One of his more notable student affairs was with Jerome Pollitt, a female impersonator ten years his senior...In March 1904, while Crowley was in Egypt, he had a revelation, in which he supposedly made contact with his Holy Guardian Angel. Identifying itself as Aiwass, this being allegedly spent three days dictating a text to Crowley. Known as the Book of the Law, it contains the core philosophies that underlie Crowley's esoteric system of thought. According to this work, Crowley was the prophet who would introduce the world to the Age of Horus. This new era, in which sexuality was to occupy a central, honored position, would be characterized by the integration of male and female sexual energies...In 1907 Crowley founded his own occult group, which he named the Order of the Silver Star. One of his notable followers was Victor Neuburg, whose initiation was reported to have included homoerotic elements. In 1909, he traveled with Neuburg to North Africa. There, in the desert, the two men engaged in a series of magical rituals, some of which involved homosexuality."

But, as we pointed out before, this is mass-psychology weaponized. Sigmund Freud's favorite proverb was "Know Thyself." And knowing oneself, and how the wires are pulled (and who's pulling them) is what undoes all the 'magic.' Religious conversion is a strong antidote, but as Freud proved, even simple human reason can break the power of mass-manipulation. Turning to God instead of the herd for guidance is the next step.

Bernays himself wrote that ."We are governed, our minds are molded, our tastes formed, our ideas suggested, largely by men we have never heard of. This is a logical result of the way in which our democratic society is organized. Vast numbers of human beings must cooperate in this manner if they are to live together as a smoothly functioning society. In almost every act of our daily lives, whether in the sphere of politics or business, in our social conduct or our ethical thinking, we are dominated by the relatively small number of persons who understand the mental processes and social patterns of the masses. It is they who pull the wires which control the public mind." As ominous as that sounds, if one analyzes it, one can see that his whole system is nothing but a house of cards. A handful of people who see through the manipulation, standing up and saying 'NO!' can blow the entire edifice to pieces.

If we ever hope to regain our liberties and our country again, it will involve this kind of introspection, repentance, and following through with action. In this case, the action mostly involves refusing to submit oneself to the so-called 'New Normals' and other cultural 'narratives.'