CHURCHIANS FOR BIDEN GET HUMILIATED

Blogger Pacific Pundit had a brief article up today  about a petition being circulated by a group of Churchians to the Junta protesting inclusion of abortion funding in the so-called Covid-19 Relief Bill. While I agree with taking that provision of the Bill (along with other handouts for the Elites), I had to do a double-take reading the premises behind the petition. It reads:

"As pro-life leaders in the evangelical community, we publicly supported President Biden's candidacy with the understanding that there would be engagement us on the issue of abortion and particularly the Hyde Amendment. The Biden team wanted to talk to us during the campaign to gain our support, and we gave it on the condition there would be active dialogue and common ground solutions on the issue of abortion. There has been no dialogue since the campaign.We feel used and betrayed and have no intention of simply watching these kinds of efforts happen from the sidelines. Many evangelicals and Catholics took risks to support Biden publicly. President Biden and Democrats need to honor their courage."

I thought at first that this had to be fake news, but no; it's for real. Granted, the Republican Party has a pathetic record of selling out to the Abortion Industry too; but when did the Democrats ever take a pro-life stand? There used to be some pro-life Democrats---I don't know if there are any left---but seriously: "As Evangelicals, we publicly supported Biden's candidacy?" These were people who were in the streets breaking down statues of Jesus and burning churches; and these yahoos actually thought that the Junta would work with Christians? 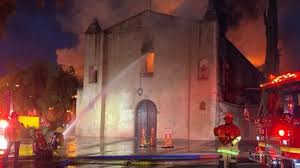 Orange Man Bad, they may as well have said. Points 2 and 4 are false; Point 3 is true, but not relevant to the issue; and point 1 is sophistry.
On their website, they make the rather dubious claim that the number of abortions have declined under Democrats while increasing under Republicans. They attribute this to the Democrats' poverty programs, which they assume encourages poor families to have children. This is the premise behind their first point.

I would suggest that (assuming their claims are actually true) since most women who get abortions are politically Liberal, the numbers go up under Republican Administrations because they feel less hopeful about the future. All that we need recall is the hysterical behavior of Liberal women during the Trump Administration and ask if that isn't a real possibility. I would wager that the number of prescription antidepressants went up among them too.
But the whole idea of reducing abortions is stupid. It's the same logic behind these Churchian adoption agencies who recently sold out to the Gay Mafia. Pro-Life and Anti-Life do not peacefully coexist. Either one supports outlawing the murder of children, or one doesn't. One either opposes homo adoption or one doesn't. Having hundreds of children murdered in the womb each year wouldn't make us a better country than murdering thousands, as we do now. The political leadership is no less guilty for funding one baby-killing than it is for funding a million of them. The attitudes that these Evangelicals take is being an NPC at its worst.
It's sad to think that Evangelicals once were moved by stories of child-sacrifice to go as missionaries to countries populated by savages with hopes of ending these hideous practices. Now they've evolved to kneeling in front of street-savages and supporting human sacrifice.
Their second point about overturning Roe vs. Wade is just a falsehood. True: Conservatives haven't done much to stop abortion and instead shove the responsibility onto the Court. Even Republican majorities on the U.S. Supreme Court have never bothered to revisit Roe. The Corporate interests who currently actually govern the United States have encouraged abortion through the Insurance Cartels, while even the U.N. and AMA admit that infertility has become an epidemic in the U.S. and is being ignored by these same insurance interests. Roe v. Wade is not irrelevant: it is currently the law of the land and opens taxpayer funding for these abominable enterprises.
Their charge that Trump was a threat to Christianity is just ridiculous. Trump has spoken at churches; he repealed federal support for atheist and satanist groups who want to have Christian displays removed. He's also the only president since Gerald Ford who actually fought to end federal abortion funding, and actually succeeded in stripping some abortion mills of funds. Trump ended the federal policy of siding with homo activists who targeted small businesses and even issued presidential pardons for some jailed for Right of Conscience. Trump used his influence to pressure the Turkish Government to end their persecution of Christians; and offered to give asylum to a British family whose baby was ordered taken off life-support by a cruel judge, Does anybody suppose that the Junta will do any of this?
No: the Junta is going to reverse all of these policies because dolts like these 'Evangelicals for Biden' only saw Orange Man Bad for four years, and helped elevate to power the most anti-Christian Regime that America has ever produced. 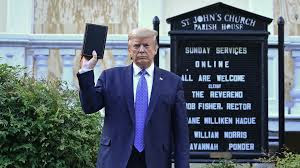 The compromising, toadying, do-nothing Right has once again sold us out. Now they're complaining that the Junta doesn't respect them. What did they expect? The Junta represents a body of men who want to wipe out traditional religion and replace it with themselves as earthly gods. Now that they've seized control of the United States, the Churches should be the very ones opposing them. But, they're showing us all what their true colors really are.
Christians can disagree on policy issues. It is not debatable when the State is moving towards an anti-Christian dictatorship and prescribes radically anti-Christian policies. 'Evangelicals for Biden' are a pack of ignorant poltroons and represent everything wrong with today's postmodern Churchianity.